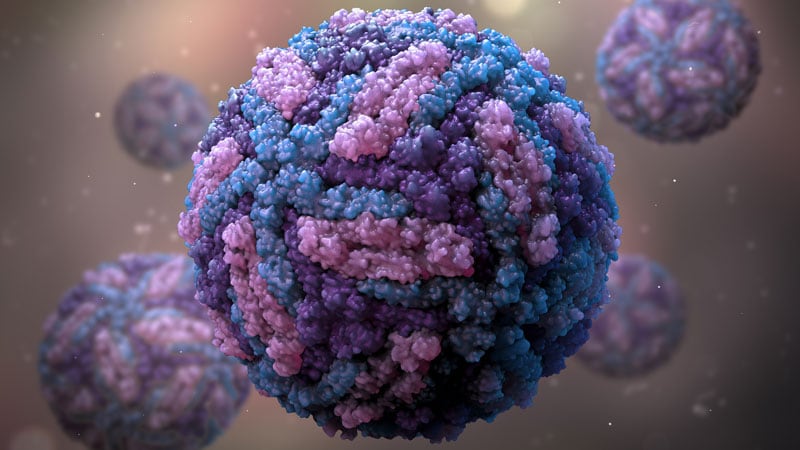 A Zika virus vaccine candidate prompted antibody responses in 80% of individuals who received two doses in a phase 1 study.

Although Zika cases have declined in recent years, “geographic expansion of the Aedes aegypti mosquito to areas where population-level immunity is low poses a substantial risk for future epidemics,” wrote Nadine C. Salisch, PhD, of Janssen Vaccines and Prevention, Leiden, the Netherlands, and colleagues in a paper published in Annals of Internal Medicine.

No vaccine against Zika is yet available, although more than 10 candidates have been studied in preclinical trials to date, they said.

The researchers randomized 100 healthy adult volunteers to an experimental Zika vaccine candidate known as Ad26.ZIKV.001 in either one-dose or two-dose regimens of 5×1010 viral particles (low dose) or 1×1011 viral particles (high dose) or placebo. Approximately half (55%) of the participants were women, and 72% were White.

Approximately 80% of patients in both two-dose groups showed antibody responses for a year after vaccination. Geometric mean titers (GMTs) reached peak of 823.4 in the low-dose/low-dose group and 961.5 in the high-dose/high-dose group. At day 365, the GMTs for these groups were 68.7 and 87.0, respectively.

The researchers also explored protective efficacy through a nonlethal mouse challenge model. “Transfer of 6 mg of IgG from Ad26.ZIKV.001 vaccines conferred complete protection from viremia in most recipient animals, with statistically significantly decreased breakthrough rates and cumulative viral loads per group compared with placebo,” they said.

The study findings were limited by the inability to assess safety and immunogenicity in an endemic area, the researchers noted. However, “Ad26.ZIKV.001 induces potent ZIKV-specific neutralizing responses with durability of at least 1 year, which supports further clinical development if an unmet medical need reemerges,” they said. “In addition, these data underscore the performance of the Ad26 vaccine platform, which Janssen is using for different infectious diseases, including COVID-19,” they noted.

“Development of the investigational Janssen Zika vaccine candidate was initiated in 2015, and while the incidence of Zika virus has declined since the 2015-2016 outbreak, spread of the ‘carrier’ Aedes aegypti mosquito to areas where population-level immunity is low poses a substantial risk for future epidemics,” lead author Salisch said in an interview. For this reason, researchers say the vaccine warrants further development should the need reemerge, she said.

“Our research has found that while a single higher-dose regimen had lower peak neutralizing responses than a two-dose regimen, it achieved a similar level of neutralizing antibody responses at 1 year, an encouraging finding that shows our vaccine may be a useful tool to curb Zika epidemics,” Salisch noted. “Previous experience with the Ad26 vector platform across our investigational vaccine programs have yielded similarly promising results, most recently with our investigational Janssen COVID-19 vaccine program, for which phase 3 data show a single-dose vaccine met all primary and key secondary endpoints,” she said.

“The biggest barrier [to further development of the candidate vaccine] is one that we actually consider ourselves fortunate to have: The very low incidence of reported Zika cases currently reported worldwide,” Salisch said. “However, the current Zika case rate can change at any time, and in the event the situation demands it, we are open to alternative regulatory pathways to help us glean the necessary insights on vaccine safety and efficacy to further advance the development of this candidate,” she emphasized.

Consider Pregnant Women in Next Phase of Research

“A major hurdle in ZIKV vaccine development is the inability to conduct large efficacy studies in the absence of a current outbreak,” Ann Chahroudi, MD, of Emory University, Atlanta, and Sallie Permar, MD, of Weill Cornell Medicine, New York, wrote in an accompanying editorial.

The current study provided some efficacy data using a mouse model, but “these data are obviously not conclusive for human protection,” they said.

“A further challenge for ZIKV vaccine efficacy trials will be to demonstrate fetal protection from [congenital Zika syndrome] after adult immunization. There should be a clear plan to readily deploy phase 3 trials for the most promising vaccines to emerge from phase 1 and 2 in the event of an outbreak, as was implemented for Ebola, including infant follow-up,” they emphasized.

The editorialists noted that the study did not include pregnant women, who represent a major target for immunization, but they said that vaccination of pregnant women against other neonatal pathogens such as influenza and tetanus has been effective. “Candidate ZIKV vaccines proven safe in phase 1 trials should immediately be assessed for safety and efficacy in pregnant women,” they said. Although Zika infections are not at epidemic levels currently, resurgence remains a possibility and the coronavirus pandemic “has taught us that preparedness for emerging infections is crucial,” they said.

Zika Vaccine Research Is a Challenge Worth Pursuing

“It is important to continue Zika vaccine research because of the unpredictable nature of that infection,” Kevin Ault, MD, of the University of Kansas, Kansas City, said in an interview. “Several times Zika has gained a foothold in unexposed and vulnerable populations,” Ault said. “Additionally, there are some data about using this vector during pregnancy, and eventually this vaccine may prevent the birth defects associated with Zika infections during pregnancy, he noted.

Ault said he was not surprised by the study findings. “This is a promising early phase vaccine candidate, and this adenovirus vector has been used in other similar trials,” he said. Potential barriers to vaccine development include the challenge of conducting late phase clinical trials in pregnant women, he noted. “The relevant endpoint is going to be clinical disease, and one of the most critical populations is pregnant women,” he said. In addition, “later phase 3 trials would be conducted in a population where there is an ongoing Zika outbreak,” Ault emphasized.

The study was supported by Janssen Vaccines and Infectious Diseases.

Chahroudi had no financial conflicts to disclose. Permar disclosed grants from Merck and Moderna unrelated to the current study. Ault had no relevant financial conflicts to disclose; he has served as an adviser to the Centers for Disease Control and Prevention, the World Medical Association, the National Vaccine Program Office, and the National Institute for Allergy and Infectious Diseases. He is a fellow of the Infectious Disease Society of American and a fellow of ACOG.