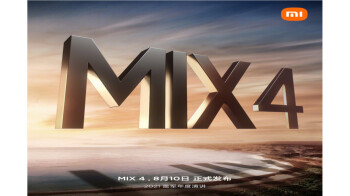 Xiaomi has set a date for its next big live-streamed event, and—surprise, surprise!—it happens to fall on the day immediately before Samsung’s much-anticipated annual Unpacked event on August 11.

Is this a secret ploy to steal a bit of Samsung’s spotlight and glory? Although the two companies are hardly competing in the same tier, this coming August 10 is set to be a fairly momentous event for Xiaomi as it marks a full ten-year anniversary of the Chinese electronics company’s existence.

Apart from marking a decade of growth for the mid-range electronics company, it seems this event may also be the day of launching Xiaomi’s new Mi Pad tablet series, along with the Mi Mix 4 next week, according to an official announcement on Weibo from the company account.
Android Authority first caught on to the social media post, which simply announces an event to take place on August 10 at 7:30 PM CST (7:30 PM ET). The post claims the event will cover Xiaomi’s recent “good news,” as well as company founder Lei Jun’s “10 most difficult choices” that he had to take during the past 10 years of the company’s lifespan.
Weibo tipster Bald Panda picked up on the announcement, and first made the connection between the event and a launch of the Mi Pad 5 series and the Mi Mix 4:

It only makes sense for these two most awaited devices from Xiaomi’s lineups to emerge during that day, even if the company refrained from sharing details in its simple Weibo post. We know these devices have been long simmering in the pot and are awaiting a decent debut, following their successful recognition in various certification agencies over past months.

We even have some previously leaked details on the hefty Mi Mix 4 series, which suggest that the two upcoming smartphone models will have up to 12GB of RAM, and up to 256GB of storage. There aren’t likely to be any SD card slots, although the lineup should support dual SIM cards in China, along with 5G network support, thanks to Qualcomm’s Snapdragon 888 processing chip.

The Mi Mix 4 is also rumored to feature an all-screen design, as well as an under-panel selfie camera. The battery could be as big as 4,500mAh, and supporting 120W fast charging with a wireless option.

While there isn’t much public information on the latest family in Xiaomi’s Mi tablet line yet, we do know from a leaked prototype that the Mi Pad 5 will have four speakers, stylus support with wireless charging, and possible keyboard support, similar to Apple’s iPad design.

The future flagship tablet’s camera seems to be designed similarly to that of the Mi 11, and it will be charged via a USB-C port.

All three alleged upcoming variants of the Mi Pad 5 are rumored to feature impressive 120Hz displays, with the added possibility of 2K resolution across the series as well.