Home > Android/Apps > Which is the best privacy-focused WhatsApp alternative?

Which is the best privacy-focused WhatsApp alternative?

WhatsApp’s recent policy update has turned into a Pandora’s box for the app’s parent firm, Facebook. The resulting exodus to rival platforms has sent shockwaves so strong that the company felt the need to run full front-page ads in several Indian dailies to make its case. While Facebook was busy doing some damage control, Telegram and Signal got to benefit from disgruntled users flocking en masse for their apps. Telegram emerged as the bigger winner of the two, having added over 25 million users in just three days (breaching the milestone of 500 million active users in the process). While Telegram’s an attractive platform to be on, with all its bells and whistles, how sure can you be that it’s doing a better at protecting your privacy than WhatsApp?

One feature working in WhatsApp’s favor is end-to-end encryption (E2EE) in personal chats, which prevents both WhatsApp and Facebook (or any other party, for that matter) from snooping on your messages. Unfortunately, on Telegram E2EE isn’t enabled by default and is only offered when you switch to secret chats. That has the potential to pose a barrier for those who aren’t technically inclined to mess with these kind of options. The app makers argue that it allows for far easier chat backups to the cloud and enables several connectivity and sharing features, which indeed won’t be possible with E2EE in place.

Signal is run by a nonprofit that survives on donations from users and other benefactors, rather than by monetizing your data.

Another point of apprehension is that Telegram recently announced its revenue model, which involves serving ads to large channels. Although Telegram made it abundantly clear that the ads will be both user-friendly and respectful of your privacy, it’s getting increasingly hard to trust such promises after witnessing several companies backtrack on their word. While generating revenue is absolutely necessary to sustain a platform that hosts hundreds of millions of users, these new plans open the door to the possibility that ads may spread to other sections of the app over time.

Issues like these have led several privacy proponents, including noted ones like Edward Snowden (and more recently Elon Musk), to suggest using Signal instead. Signal’s claim to fame is its privacy-first approach, which includes open-sourcing its code and enabling E2EE by default. As a matter of fact, Signal developed the encryption protocol that WhatsApp uses. Another thing that helps is the fact that Signal is run by a nonprofit that survives on donations from users and other benefactors, rather than by monetizing your data. Still, the service has its limits, like the need to sign up with a phone number (rather than something like a username or an email address). 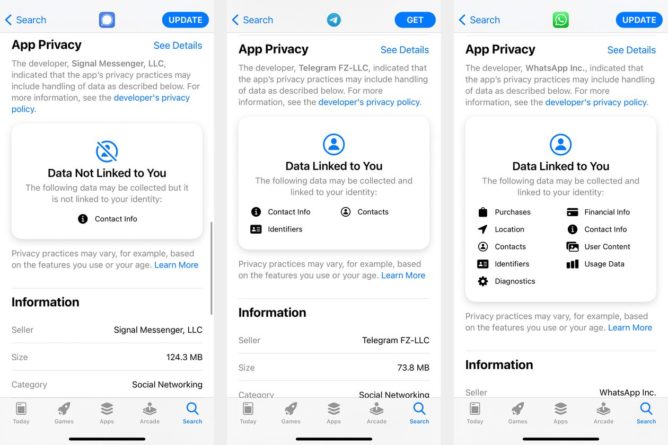 Signal, Telegram, and WhatsApp declaring on the Apple App Store what data they collect (via: WSJ).

What adds to the trust factor is that Telegram isn’t owned and operated by a company like Facebook.

Having said that, Signal doesn’t collect nearly as much data on you as WhatsApp does. The app doesn’t log your IP address, and whatever little metadata it collects is also encrypted. It often boasts about one instance from 2016 when it was subpoenaed to release any information it had on a particular number, and all it could hand over was the date of account creation and the last login — that’s it.

To be fair, Telegram and its makers have time and again proven their mettle by being vocal about user privacy, protecting user identities during Hong Kong’s mega protests, and even resisting the FBI when it apparently wanted a backdoor into Telegram. At no point in the past has the company been proven to be snooping on its users’ data, and it clearly states that it doesn’t intend to, either. What adds to the trust factor is that Telegram isn’t owned and operated by a company like Facebook, which has a reputation of being shady and of questionable morality.

But that sense of safety isn’t just why people are inclined towards Telegram. It also hosts more users on its platform — almost 10 times more than Signal — so it’s easier to find your friends and family on Telegram. For a communication app, that’s already a big win. On top of that, it offers a robust set of community features that even WhatsApp can’t match in many cases. Meanwhile, Signal is playing catch-up and has lately been gearing up to introduce more in-demand features, and it’s only going to get better from here.

Despite all the available options and the high-octane drama, the two-billion-user-strong WhatsApp isn’t going to die so easily.

Despite all the available options and the high-octane drama, the two-billion-user-strong WhatsApp isn’t going to die so easily. As Signal’s (and WhatsApp’s) co-founder Brian Acton points out, people are more likely to now distribute their communications across two or even more apps (possibly Telegram or Signal) in conjunction with WhatsApp. For those wary of the app being able to read their messages, Signal — and even WhatsApp — is a better option than Telegram, but if you just want to steer away from the clutches of Facebook, both Signal and Telegram seem to make strong cases.

This whole episode says volumes about the general lack of trust in Facebook and, by extension, any of its associates. More importantly, it serves as strong evidence that people aren’t any more ready to put up with shoddy business practices, even if that means moving their entire social life to another platform. It’s also a wake-up call for everyone outside the EU that we all need far stricter privacy laws to prevent such ignoble companies from thrusting their will down everyone’s throats.

The Oculus Quest 2 is now the most-used VR hea...