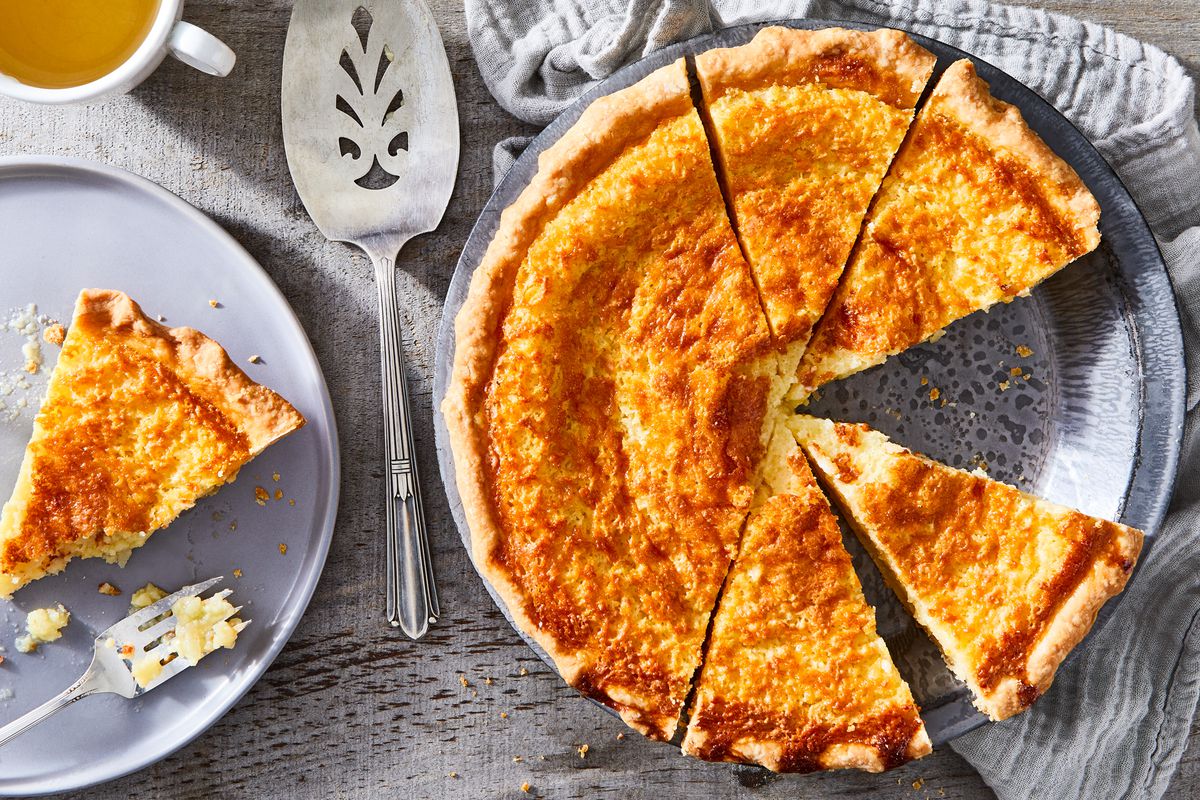 The last gasp of summer is high time for pie making. Fruits that have spent months softening in the sun are at their best when paired with a flaky, buttery crust. But what if I were to tell you that recently, a certain pie caught my eye that needs no fruit at all? In fact, this pie requires so few ingredients that its main component is water.

Water pie, a Depression-Era recipe, has been making rounds on the internet. It’s not a nickname: The filling in water pie is in fact primarily water. There are, of course, other ingredients that help differentiate the pie from a cold glass of Evian. There’s flour, butter and sugar—but really, not much else.

Water pie first caught my attention on TikTok, where B. Dylan Hollis (@bdylanhollis), a “mid-century connoisseur,” who tries his hand at a variety of vintage recipes, surfaced the creation for one of his videos. “Can you bake a pie with four ingredients?” he says, amassing the tiny ingredient list. “Yes! But I’d rather eat my mattress.”

Hollis proceeds to mix and roll out a pie dough, lay it into a tin and par-bake. Once out of the oven, he fills the crust directly with water, sugar, some flour, and pats of butter. He mixes it very little (perhaps not at all) then pops it back into the oven. Upon tasting the finished product, he screws up his face in disgust and proclaims it tastes like “soggy lint.”

I reached out to Hollis, who says he “came across the recipe printed in a community cookbook titled 90th Anniversary Cookbook – Women of United Methodist Church, Gordon Nebraska.” As a collector of vintage recipes, he was drawn to a section of the cookbook that featured recipes from the Great Depression. What we know as a water pie, was referred to in the book as Hard Times Pie 1929. “Immediately, what stuck out to me was the complete lack of spices or flavoring,” he says. “The filling simply called for water, flour, and sugar. Many online iterations one finds of the Water Pie include vanilla extract, however this printed recipe obviously took its title of ‘Hard Times’ earnestly.”

As he so aptly demonstrates in his TikTok, the water pie left something to be desired (“the taste was that of gelatinous, sodden dough”). BuzzFeed’s Erin Phraner, however, had something of a different experience with her own water pie. Also a retro recipe enthusiast, Phraner had kept the idea of making a water pie in her back pocket for some time. It wasn’t until the peak of the pandemic and the first lockdown that she thought to finally break out one of the wackiest recipes in her arsenal.

The video was a hit. “I didn’t expect it to go as viral as it did. It was silly and magical and actually really delicious (especially to someone like me who has a mega sweet tooth),” she said. “I think I’ve seen a lot of people write about it from the Depression-Era standpoint but that wasn’t it for me at all. It was more about doing something silly and out-of-the-box to just shake off the heaviness of the year.”

There must be some correlation between the current moment and water pie’s resurgence. I thought back to Clara Cannucciari, who built a YouTube empire off of her videos in which she cooked her way through the recipes that kept her family alive during one of America’s darkest chapters. An appreciation for the homegrown and the simplistic flourished during lockdown, was water pie one such example? Hollis seems to think so:

“We can’t deny the parallels our current COVID-19 pandemic shares with the Great Depression. Many of us are still stuck inside, money is short, and the hindrances to eating out in public has forced us to return to our kitchens and reflect on it as a place to create and sustain us more than ever before. Baking historical recipes is one of the most interesting and engaging ways to experience the past, and through that: understand our place in the present time.”

Would you make a water pie? Do you have any favorite Depression-Era recipes? Tell us about them in the comments!