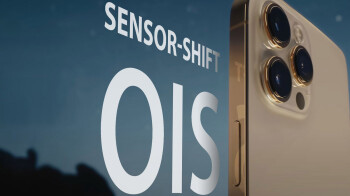 Sensor shift stabilization is coming to all iPhone 13 models and it is the biggest innovation in stabilization technology on phones in literally a decade, so you might be wondering what exactly is sensor shift stabilization and how it is different from the optical image stabilization (OIS) that most phones have used so far?
Interestingly, sensor shift stabilization is a technology that comes to phones from DSLRs. Just like OIS, it aims to stabilize your photos and videos, and negate the occasional hand jitter that could result in a blurry photo. But it’s about how it achieves that, and in order to understand the differences we have to look at the construction of a smartphone camera module.
Encapsulated inside a camera module you have two separate elements: the lens unit and just below it, the sensor unit. And here are the differences:
So the theory boils down to those tiny electromagnetic actuators that with OIS moved the lens around based on data from a gyroscope, while with sensor shift, it the sensor instead of the lens. Since the sensor is actually lighter than the lenses, this approach should mean it is faster to correcting movements.

So yes, technically sensor shift stabilization IS indeed better than OIS, but is it 5X better as the number of adjustments per second suggests? Well, not really.

In a number of real-world tests, we have seen that the actual perceived difference in stabilization is very minimal, so don’t expect something truly ground-breaking. Still, you can count on a gradual improvement and no, sensor shift stabilization will not replace smartphone gimbals for those video enthusiasts, at least not quite yet.

The iPhone 12 Pro Max was the first phone in the world with sensor shift IS. Image courtesy of Jerry Rig Everything YouTube channel

It also does seem like this technology requires a bit more space for the camera module, which might be the reason why all four new iPhone 13 models seem to have a larger camera bump compared to their predecessors.

We also still expect despite all new iPhone 13 models coming with sensor shift stabilization, that they will continue to use slightly different sensor sizes as the iPhone 13 Pro Max will likely still have the largest sensor while the other three models will share the same sensor size for the main camera.