What American and JetBlue’s new partnership means for travelers 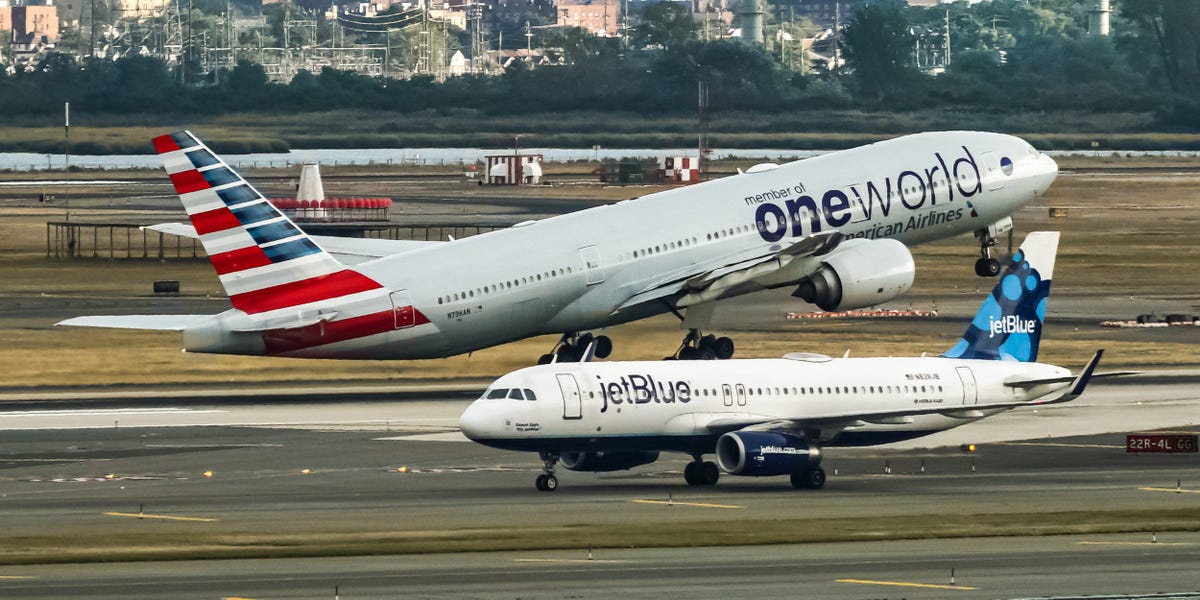 American Airlines and JetBlue Airways are joining forces in the Northeast as part of an alliance that creates new routes, schedules, frequent flyer programs, and more.

The duo is moving forward with the first phase of a “Northeast alliance” following a regulatory review from the Department of Transportation that wrapped in January. JetBlue and American flight codes will be placed on over 70 flights between the two airlines under a codeshare agreement, allowing customers to book certain flights on either airline or website.

“Our alliance with American opens the door for JetBlue to successfully enter into new markets, introducing more choices and our award-winning service and low fares to more customers,” Scott Laurence, JetBlue’s head of revenue and planning, said.

American has been joining forces with coastal airlines like JetBlue on the East Coast and Alaska Airlines on the West Coast to fill the gaps in its route network. Both American and JetBlue will add 33 new routes combined to domestic and international destinations as travel slowly rebounds with the COVID-19 vaccine rollout and growing testing for entry options in foreign countries.

Here’s where travelers will see the biggest differences.

New routes from the Northeast

From Kennedy International, two JetBlue new routes will be added to Boise, Idaho, and Kalispell, Montana, in July. Both are located in the Mountain West, a region that’s been surging in popularity during the pandemic as Americans seek social distancing in nature.

On American, new routes from Kennedy to the Colombian cities of Cali, Bogota, and Medellin; Santiago, Chile; St. Lucia; and Providenciales, Turks and Caicos will start in May and June. Previously announced routes from New York to Tel Aviv, Israel, Athens, Greece, and Rio de Janeiro, Brazil also launch this year.

American will also give New York City its first non-stop link to Orange County, California, as the airline is adding a new route from Kennedy starting July 2. The daily flight will be operated by American’s ultra-premium Airbus A321 aircraft with first class, business class, and economy class seats.

On the popular New York-Los Angeles route, for example, the airlines will offer a combined 14 daily flights. Both American and JetBlue operate the route with Airbus A321 aircraft with business class cabins.

American also plans to offer first class on all of its New York-originating flight as it retires smaller regional jets like the Embraer ERJ145. JetBlue currently offers business class on select routes to popular destinations.

Loyalty has its perks

Frequent flyers from both airlines will also benefit as they’ll be able to earn miles when flying on either starting this spring. Both airlines will soon allow customers to use points and miles to book award tickets on each other’s flights but that functionality will come “over time.”

A JetBlue loyalist might be able to book an award ticket from New York to Tel Aviv on American as Israel is currently well beyond JetBlue’s scope of service.

Elite status holders may also receive reciprocal benefits when traveling on the two but specifics, including whether that includes complimentary first class upgrades, have yet to be announced.

JetBlue elites currently do not receive upgrades into the airline’s swanky Mint business class cabin while American offers its status holders complimentary upgrades on select flights. Upgrades are a key perk of frequent flying that keep customers loyal to a particular airline since a single upgrade can be worth hundreds of dollars and yield free meals, early boarding opportunities, and even complimentary lounge access.

The codeshare agreement opens the door for single-itinerary bookings for connecting flights, simplifying the travel experience for those that can’t get to their final destination on either American or JetBlue alone.

A JetBlue flyer in Buffalo, for example, could book a one-stop trip from New York to Athens, Greece on a mix of JetBlue and American flights under one itinerary.

The move also eliminates the need for self-connections between the two airlines where passengers book two separate tickets. While a widely-used practice, it can have downsides if one of the flights is canceled or delayed.

Flights can already be booked under the codeshare agreement that starts on February 25.

WSJ ridicules Trump for being in denial about ...

The DeanBeat: Roblox public offering is a vote...

America has neglected its cyber defense...