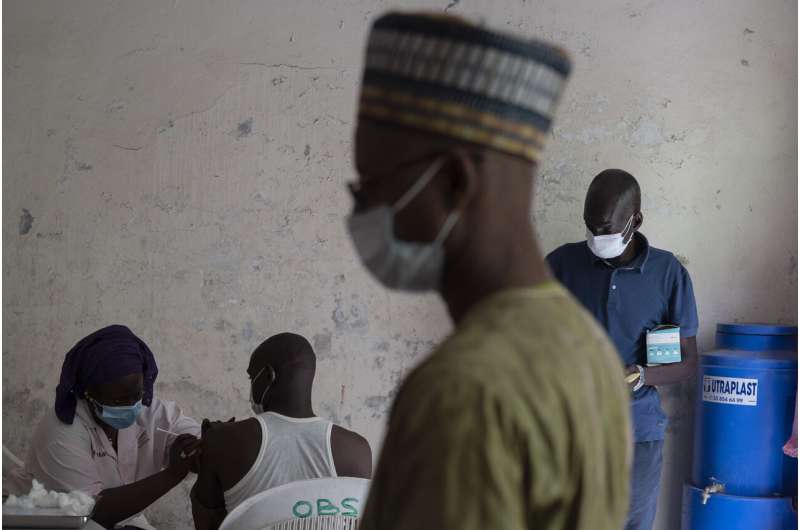 A resurgence of coronavirus cases in West Africa is hitting the region hard, inundating cemeteries where funeral numbers are rising and hospitals where beds are becoming scarce.

Those visible shifts are also pushing a reluctant population to seek out the vaccines in larger numbers at a time when shipments of doses are arriving from multiple sources after nearly grinding to a halt in recent months.

Thousands of new COVID-19 cases have been reported in the region in the past few weeks amid low vaccination rates and the spread of the delta variant, with some countries seeing their highest numbers since the pandemic began.

Residents who were previously wary of getting shots as conspiracy theories spread online are now lining up by the thousands from Liberia to Nigeria, Ghana and Senegal.

“At the beginning, there were people who gave false information, but when people noticed an increase of contaminations and deaths, people understood that only vaccination can save them,” said Bamba Fall, mayor of the Medina municipality in Senegal’s capital, Dakar.

Shortages and delays have caused Africa’s 54 countries to fall far behind wealthier nations in their COVID-19 vaccine rollouts. Some 82 million doses have arrived on the continent to date, though that is just 10% of the number needed to vaccinate 30% of its population by the end of 2021, said Dr. Matshidiso Moeti, World Health Organization regional director for Africa.

But more shipments are finally rolling in, steering the continent of 1.3 billion people into an “encouraging phase after a bleak June,” Moeti said. “There’s light at the end of the tunnel on vaccine deliveries to Africa, but it must not be snuffed out again.”

Nigeria, Africa’s most populous country with more than 210 million people, next month will receive more than 29 million Johnson & Johnson vaccines purchased by the government through the African Union. It’s also expecting 4 million doses of Moderna and almost 700,000 AstraZeneca vaccines through the COVAX program and from donations by the United States and the United Kingdom, according to Health Minister Osagie Ehanire.

Isolation centers that were closed after a previous surge are being reopened in anticipation of a large number of patients, said Dr. Chikwe Ihekweazu, director-general of the Nigeria Center for Disease Control.

Meanwhile, confirmed cases in Senegal, which had been ahead in the fight against the virus, leapt from only 380 on July 10 to 1,700 on July 18, the highest number since the pandemic began, according to the Ministry of Health.

Dakar’s main cemetery also is seeing large numbers of funerals, many that were likely due to COVID-19 but weren’t recorded as such.

“I came for an uncle’s funeral. He died at home. Out of modesty, he did not take the tests, but everything suggests that he died of COVID-19, because he had symptoms of the disease,” said Saliou Ndoye. “This situation is worrying. There are a lot of deaths.”

Senegal is employing more community-focused campaigns as residents see people close to them—including those young and healthy—succumbing to the disease.

The country received nearly 300,000 Johnson & Johnson doses and more than 330,000 of the Chinese Sinopharm vaccine in the past week. Tens of thousands of residents are waiting for a second dose of AstraZeneca, but it is out of stock and new deliveries are not expected until August.

An increase in hospitalizations and deaths is leading many residents across West Africa to get inoculated.

“Initially, I was hesitant to take the vaccine because I saw many conspiracy theories and also the anti-vaccine media campaign appeared stronger,” Harris Fomba Tarnue, principal of the Booker Washington Institute, Liberia’s oldest technical high school, told The Associated Press.

“But when I reflected a lot on taking vaccines in the ’60s and ’70s, and the (beneficial) impact vaccines now have on global health, I concluded it’s a must for me and my family to take,” Tarnue said.

Liberia received 96,000 doses of the AstraZeneca vaccine through the COVAX initiative, but the first consignment of about 27,000 had only a month lifespan and expired as people were reluctant to get the shots, Chief Medical Officer Dr. Francis Kateh said.

The country received more than 300,000 Johnson & Johnson doses on Sunday, about two weeks after it ran out of AstraZeneca with at least 86,000 people awaiting a second dose.

Since its vaccine drive started in March, only 9,579 people in the nation of nearly 5 million have been fully vaccinated, according to the health minister.

Ghana “cannot afford to allow the recklessness of a few to endanger the lives of the majority of persons in the country,” he said, announcing masks are now mandatory in public places.

Ghana is committed to vaccinating 20 million people, representing its entire adult population, by the end of this year, he said.

He pledged $25 million to start an institute that would allow Ghana to produce vaccines, and not be dependent upon foreign manufacturers. South Africa is currently the only country in sub-Saharan Africa that has the capacity to manufacture the doses.

Worst of COVID-19 is yet to come for Africa: WHO

© 2021 The Associated Press. All rights reserved. This material may not be published, broadcast, rewritten or redistributed without permission.