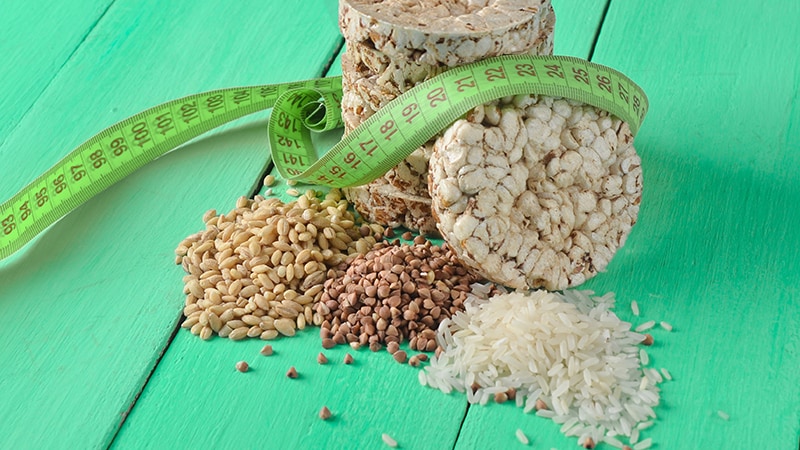 In a small, short study of overweight patients with type 2 diabetes, consuming fewer calories resulting in weight loss of around 2 kg was associated with better glycemic control than ingesting more fiber.

But patients with diabetes generally consume much less dietary fiber than guidelines recommend, so these findings should not be interpreted to mean that patients should stop trying to incorporate more fiber into their diet, the researchers caution.

She said the efficacy of increasing dietary fiber intake to ameliorate glycemic control in patients with type 2 diabetes is still controversial.

So she and her colleagues enrolled 78 patients with type 2 diabetes at their center who all received monthly nutrition counseling about a guideline-recommended lower-calorie, healthy diet.

The patients were randomized to three groups: high-fiber diet, fiber supplement, or neither (control). At 3 months, all three groups had lost a similar amount of weight and had similar drops in A1c levels.

Contrary to the researchers’ hypothesis, however, fiber intake was not associated with improved A1c levels — but weight loss was.

“Our study suggested that rather than fiber intake, caloric restriction followed by moderate weight loss is the main driver for glycemic improvement in overweight patients with type 2 diabetes,” Tramontana told Medscape Medical News in an email.

Nevertheless, although “increasing dietary fiber did not promote better glycemic control, we cannot exclude that a higher fiber intake will be effective in reducing A1c,” she speculated.

Thus, according to Tramontana, “Clinicians and dietitians should still advise patients with diabetes to increase fiber intake in order to improve the quality of their food choices.”

“Results from this trial [of 78 patients] are unlikely to remove the benefits observed for increasing fiber intakes on diabetes management, including in weight loss” found in a review article and meta-analysis of 1789 patients with diabetes, which Reynolds authored (Lancet. 2019;393;434-445).

That study showed “patients with prediabetes, type 1, or type 2 diabetes should increase their dietary fiber intakes by 15 g/day, or to 35 g/day;” he observed.

“Vegetables, pulses, whole fruits, and whole grains are all excellent sources of fiber,” he continued, adding, “a practical way to increase fiber intake is to replace refined grain products with whole grain foods.”

High-fiber foods have a lower glycemic index, delay gastric emptying, and promote satiety, so eating these leads to a smaller increase in blood glucose after a meal and thus helps to promote better glucose control, Tramontana explained.

In a previous study, she and her team found that in 394 patients with diabetes, mean dietary fiber intake was 19 g/day — far below guideline recommendations.

In the current study, researchers hypothesized that in patients with type 2 diabetes, upping dietary fiber consumption would improve glycemic control and the fiber source (diet or supplement) might make a difference.

To test this, they enrolled patients with type 2 diabetes who were 45-80 years old and had an A1c of 6.5%-8.5% taking metformin monotherapy.

All patients received 30-minute individual counseling sessions with a study dietitian at baseline and every 4 weeks.

Those in the dietary-fiber group were advised to eat 35-45 g/day of fiber, for example, by eating vegetables at lunch and dinner and foods such as whole grain bread and walnuts.

Patients in the dietary-supplement group took a daily supplement that contained close to 10 g of mainly insoluble wheat bran and psyllium fiber.

At 3 months, patients in the two high-fiber groups (but not those in the control group) were consuming significantly more fiber.

Patients in all three groups had reduced their daily caloric intake and had similar drops in A1c levels and weight.

“Even a moderate weight loss of about 1.6 kg at 3 months was associated with an improvement in A1c,” Tramontana noted.

Tramontana and Reynolds have reported no relevant financial disclosures. Disclosures for the other authors are listed with the abstract.