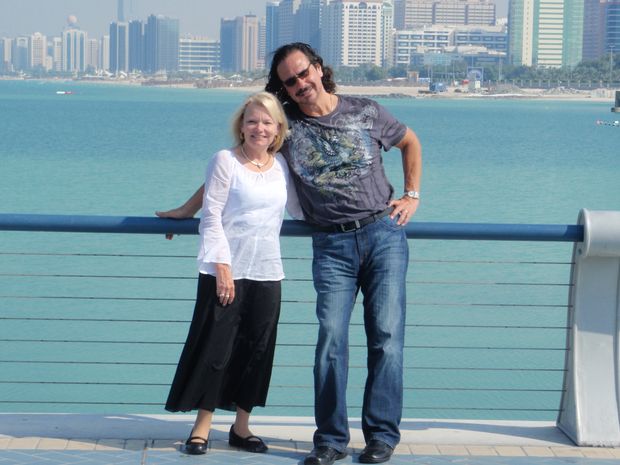 It’s midafternoon, sunny and in the 70s on a November day in Athens. Daniel Bartlow and Linda Pinckney, who moved to the Greek capital three years ago, are getting ready for their daily happy-hour ritual on their balcony.

She and her husband, Americans in their 60s, moved here without speaking Greek and only weeks after she retired from her job in Arkansas. They settled on Athens after considering Tampa, Fla., Barcelona and Venice and say it’s a great fit for what they want: easy travel and an affordable place to live.

“It still amazes me to be walking and then looking up and there’s the Acropolis. Wow,” she says. “And the weather’s fabulous.”

They estimate they spend less than $3,000 a month, or about half what it would cost for a similar life in Tampa. Travel — they are big fans of cruises — is on top of that. Before the COVID-19 pandemic, they were taking big trips every quarter.

Even with the pandemic that has shut down cafés and limited restaurants to takeout and delivery. “We feel lucky — we could be in a lot worse places,” Daniel says.

Here’s how they did it and what daily life is like for them in Athens.

While Linda worked full-time for the state of Arkansas evaluating foster children and traveling throughout the state, Daniel’s job was to research retirement options. They ruled out staying in Arkansas, where Linda is from, given their ambitious international travel plans, the cost of flights from Arkansas and the poor travel connections that left them exhausted when they returned home to Bella Vista, just north of Bentonville, after vacation.

Tampa, they decided, was the only place in the U.S. that fulfilled their wish list. But when they were finally ready to buy, there was nothing on the market that they wanted.

They had also been weighing European options; they had visited many cities while living in Germany for four years when they both worked for the U.S. government. They ruled out the option of being European nomads, moving every few months, and settled on Athens without a final visit.

“Most people seem to think that being on one of the more exotic Greek islands would be better than in Athens,” Daniel says. “This is a personal decision but having the infrastructure here, including being car-free because of the metro system, and having so many restaurant options was instrumental in our picking Athens.”

Linda and Daniel’s tip: call the closest Greek consulate for help in applying for a “D” visa allowing a stay of up to a year. Once in Greece, you can apply for a longer-term visa.

The couple needed about three weeks to collect the necessary documents before going to the consulate in Houston, then another four days to come up with additional documents requested at that appointment. Three days after that, they had their visas.

They didn’t use an attorney.

Harder, they say, was getting a visa for their cat, Imhotep, named after a high priest of Egypt.  He needed an EU health certificate (also known as an International Pet Passport), which meant getting a rabies shot and immunizations that he’d already had — and they had to be within 10 days of arrival in Greece. They needed a new veterinarian for that. An extra wrinkle: Greece requires an original ink signature from the USDA Animal and Plant Health Inspection Service on the form, rather than an electronic or faxed signature.

When they landed at the Athens airport in November 2017 with Imhotep as part of their carry-on luggage, they went through immigration and customs “and no one noticed we had a cat,” Daniel recounts with amusement.

Once in Athens, they applied for two-year visas. That process, they recall, began by showing up at the immigration office and waiting until their number was called. Then they needed to get a Greek tax number and Greek social-security numbers, all complicated by shutdowns over the Christmas holidays. Sometimes they had to stand in line just to make an appointment for the next step.

They also needed to show they had no criminal convictions, could support themselves — a minimum monthly income of €2,000 ($2,400) apiece — a lease on an apartment and a note from a U.S. doctor attesting to their health.

That last item “was one of the hardest things to get right,” Daniel says. It took four faxes because the Greeks wanted it written on the doctor’s letterhead. “In the end, the doctor scribbled ‘No health issues,’ and it was fine,” he said.

Showing proof of global health insurance — another requirement — was easy, they said. They settled on the minimum needed, with a high deductible, that costs €500 a month. (They have yet to make a claim.)

Rather than have a local attorney accompany them to immigration appointments, they did it themselves, aside from meeting once with a lawyer.

On March 20, 2018 — four months after they landed in Athens — they had two-year residency permits.

Now they’re seeking three-year visas. The coronavirus pandemic, however, has closed offices, so they’ve been granted short-term extensions until the government is back to operating normally.

So would they pursue their visas on their own again?

“If you are not patient, persistent, good-humored and have a lot of time on your hands, then an attorney would be your best bet,” Daniel says. “This was just a challenge for us to persevere on our own when meeting with immigration officials. We felt our attorney did do good work for us and only cost 60 euros ($72) for three hours of consultation.”

Finding a place to live was surprisingly hard, they said. It took six weeks before they moved into their two-bedroom furnished apartment with three balcony areas in central Athens. They hired a real-estate agent (paying a fee of one month’s rent) to sort through options and help with negotiations. They saw only five places before picking their 80-square-meter (861-square-foot) abode. The monthly rent? €650 ($775).

They have gone car-free — one of their goals in retirement — and walk, use public transportation and take taxis. They let their regular taxi driver use the parking spot that comes with their apartment.

The cruise port is just a 12-minute metro ride away.

In this pandemic time, cruises are out. But Linda and Daniel are happy with life in Athens.

“It’s so much more relaxed,” said Linda, who likes to explore the city. “People say aren’t you bored? No.”

Daniel, who had traded stocks using technical analysis, says his day is similar to what it was in the U.S.: reading the news, checking on the stock market and figuring out dinner.

A lot fewer mundane tasks take up their time now — no home repairs, no car maintenance. And while the language was a hurdle in dealing with government officials, Greece’s reputation as a tourist destination means they can rely on English for navigating daily life.

“Learning Greek just hasn’t been necessary since so many speak English,” Daniel said. “We’ve had a couple of occasions when we’ve asked our apartment neighbor who speaks excellent English to talk to a technician for us who only spoke Greek.”

The couple estimates they eat out four or more times a week, compared with three times a week in the U.S. “We still are amazed at how inexpensive it is to get a good meal at a restaurant in Athens,” Daniel says.

Most high-quality meals cost one-third or half of what they paid in the U.S., and a great dry white wine to pair with it generally costs no more than $8 per liter, he says.

Linda also loves the fresh market that sets up a block from their apartment once a week.

The pair are big fans of classic rock, and have been able to see Sting and Bryan Adams, among others, in concert.

That’s not to say there aren’t downsides to living Athens.

Banking is one of those. Turned off by the fees local banks charge, the couple has opted to keep their money in the U.S. and rely on ATMs (yes, there’s a fee for that — €2.60 to the local bank, but their Arkansas bank doesn’t charge for foreign transactions).

They deposit cash for the rent in their landlord’s local bank account and pay utility bills at the post office for a €1 fee.

Family and sports are two big ones. They rely on Skype to chat with friends and family, and Daniel catches the NFL highlights on NFL.com. But, alas, the sports discussed at the local Irish bar generally aren’t American.

They also miss the ease of online ordering. Amazon’s European offerings are slimmer than in the U.S., and fees and taxes make ordering items that will come from outside the EU too expensive, they say. So Linda picks up items on trips to see family in the U.S.

“We really like this life of simplicity and the freedom of knowing we could move anywhere, anytime because we have a furnished apartment,” Daniel says. “That said, I think we are growing in our love for Athens and Greece and may consider a house at some point.”

For more on retiring abroad, read: Here’s how you can get foreign citizenship and a second passport in as little as two years

And: They ditched America to retire by a lake in Chile on about $3,000 a month — and rarely come back

Plus: Hot springs in January, no traffic, and universal health care — the best retirement escape you’ve never heard of

4 Tweaks to Make to Your Website to Sell More...