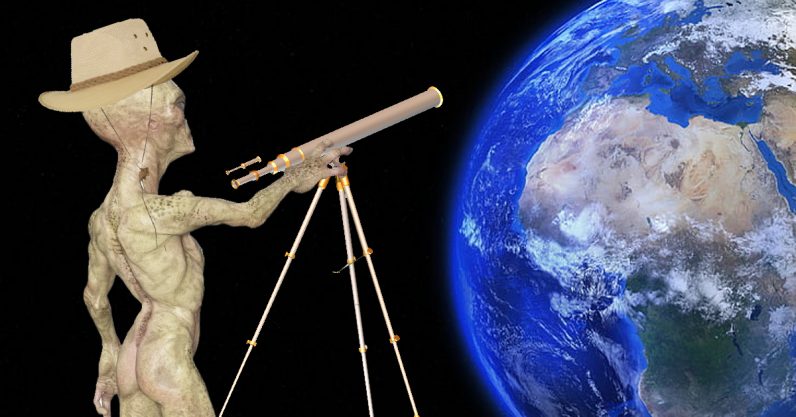 More than 4,500 exoplanets are currently known to astronomers, many of which were found as they orbited in front of their parent star as seen from Earth, dimming light from the stellar surface.

“Let’s reverse the viewpoint to that of other stars and ask from which vantage point other observers could find Earth as a transiting planet,” Lisa Kaltenegger, associate professor of astronomy at Cornell University’s Carl Sagan Institute stated.

One key to the study was searching for worlds in line with the Earth’s ecliptic — the plane drawn out by our planet as it orbits the Sun. Alien astronomers on worlds roughly in line with our orbit would see the Earth pass in front of the Sun.

[Read: What audience intelligence data tells us about the 2020 US presidential election]

Something in the air

“I believe alien life is quite common in the universe, although intelligent life is less so. Some say it has yet to appear on planet Earth.” — Stephen Hawking

Light passing through our atmosphere would reveal the presence of large concentrations of oxygen, along with methane and other gases revealing life on our world.

Astronomers are just now developing the ability to search the atmospheres of planets orbiting other stars, looking for telltale signs of life. In the coming years, astronomers could find the chemical fingerprints of life on other worlds.

The James Webb Space Telescope, due for launch in 2021, will be capable of searching the atmospheres of distant planets, searching for the telltale signs of life.

“The main way we identify planets orbiting distant stars is by measuring regular dips in starlight caused by planets blocking out bits of their sun,” Dr. Barnaby Norris of the University of Sydney stated.

Movements in Earth’s atmosphere create the twinkling commonly seen in stars. Although beautiful on a starlit night, it plays havoc with astronomical observations. Because of this, nearly all exoplanet discoveries were made using space-based telescopes.

Adaptive optics utilize a laser to measure distortion in the atmosphere. This information is fed to computerized motors which warp mirrors, correcting for the flickering.

A new photonic wavefront sensor developed at the University of Sydney uses artificial intelligence and machine learning to correct for this distortion on ground-based telescopes. This could allow astronomers to search exoplanets for the chemical fingerprints of life.

“If we’re looking for intelligent life in the universe, that could find us and might want to get in touch. We’ve just created the star map of where we should look first,” Kaltenegger said.

Some of the stars identified in this study can be seen from Earth without the need for binoculars or a telescope. Always remember, as you look up at the stars, that someone — something — up there may be looking back at us.

This article was originally published on The Cosmic Companion by James Maynard, founder and publisher of The Cosmic Companion. He is a New England native turned desert rat in Tucson, where he lives with his lovely wife, Nicole, and Max the Cat. You can read this original piece here.

Astronomy News with The Cosmic Companion is also available as a weekly podcast, carried on all major podcast providers. Tune in every Tuesday for updates on the latest astronomy news, and interviews with astronomers and other researchers working to uncover the nature of the Universe.

The Races Are Digital, and So Are the Ads, but...

The Capitol rioters are getting banned from da...