Home > Health > ‘We Are Not NY in April,’ But Docs In New Hot Spots Face Fatigue

‘We Are Not NY in April,’ But Docs In New Hot Spots Face Fatigue 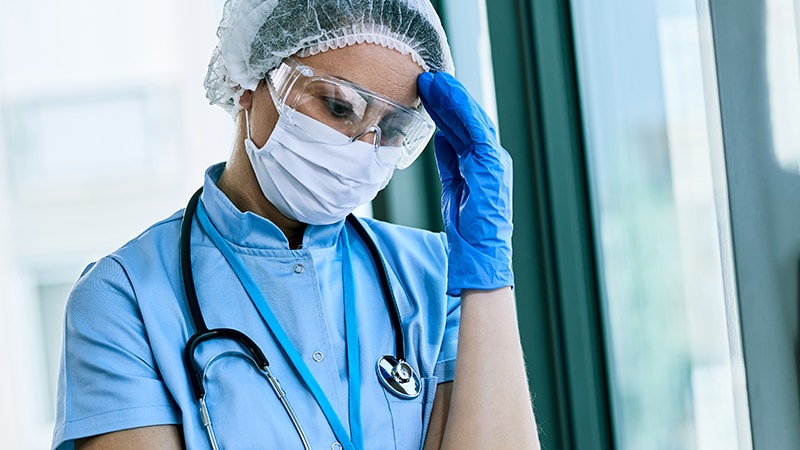 When people in Houston find out that Hilary Fairbrother, MD, works in emergency medicine, they give her an extra-wide berth — even though she always wears a mask. At home, if she has a sniffle, she wonders if it’s allergies or COVID-19. And she can’t forget what it was like to put a previously healthy 35-year-old on a ventilator.

In a word, it’s exhausting, say Fairbrother and others. Doctors in Texas, Arizona, and Florida credit their counterparts in New York City for the valuable lessons they learned on the first US front line of the COVID-19 pandemic, saying they now have an edge in combating the virus. But this new front line also suffers from built-up fatigue and anxiety, plus frustration with people who are not following social distancing guidelines.

“We are not New York in April. A lot of differences come into play when you are experiencing a spike months into the pandemic,” Fairbrother said. “They were the first. Honestly, they did the most amazing job of finding out a lot of what we know and how to take care and plan for case surges.”

As of July 12, Texas reported 8196 new cases for a total of 258,658 since the pandemic began. But at Houston Methodist Hospital, where wards were being converted into COVID-19 areas at the rate of one per day in late June, it’s a much different feeling on the front lines now than it was in New York in April, said Rob Phillips, MD, the hospital’s chief physician executive.

“We’re 100% ready,” said Phillips, a native New Yorker who has kept in touch with colleagues there. “We learned so much during the first wave, from developing protocols for everyone — from supply chain to nurses — safe and effective strategies in ICUs, new therapies, figuring out PPE and how to [safely] reuse equipment.”

In fact, experts in Houston were more panicked in April, said James McDeavitt, MD, senior vice president and dean of clinical affairs at Baylor College of Medicine, when they worried the city’s cases might spike to levels resembling New York City.

Texas Medical Center, a consortium of health-related institutions in Houston of which Baylor is a member, had about 50-100 new COVID-19 hospitalizations per day during April and May. It’s a paradox, McDeavitt said, that even with 250-450 hospital admissions in late June and early July, there was more anxiety in April. Now that officials have had time to do surge planning and get advice from people in New York, they feel reasonably prepared.

“We don’t have the penicillin [equivalent] for COVID, but we have remdesivir, the convalescent-serum trial, and anti-inflammatory drugs for the cytokine storm,” McDeavitt said. “So we’re a little more comfortable with clinical things.”

Adding to his confidence: Baylor’s calculations on PPE use rates show that Houston should be able to meet the demand, McDeavitt said. However, the American Medical Association has written to Vice President Mike Pence pleading for help to address “ongoing shortages of PPE.”

Despite greater knowledge, confidence, and ongoing public support, “it’s a crush every day,” Fairbrother said. “What I see now more than anything is fatigue. Everybody is exhausted.”

Fatigue also stems from isolation, Fairbrother said. “No one wants to be anywhere near me,” she said. She spent the first month of the pandemic sleeping apart from her husband in a different bedroom and she still wears a mask everywhere she goes.

Texas Gov. Greg Abbott issued a mask mandate for most counties in early July, and bars and nightclubs have been closed since June 26. Still, some events may escape official cancelation, like the motocross rallies one of her patients was going to every weekend, Fairbrother said.

And even if the current surge passes soon, the pandemic itself has no defined endpoint.

“It’s amazing what human beings can accomplish when they have an end point,” Fairbrother said. “You can deal with a lot: study for a test, lose weight for a wedding, train for a marathon. We’re really good at defined goals. Having no defined endpoint is very destructive. And there’s no end in sight.”

Florida: “You Second-Guess Your Day.”

In Florida, which has reported 282,435 total cases as of July 13 — including 12,343 new cases on July 12 — the crowd showing up in emergency rooms for COVID-19 tests resembles the spring break demographic, a shift from earlier in the pandemic when the number of new cases per week hovered around 5000 in April and May.

Hospitals can accommodate the numbers, in large part thanks to what they learned from the struggles of New York, said Brandon Parker, DO, a trauma and critical care physician at Jackson Memorial Hospital in Miami. But while the medical community took those lessons to heart, he has yet to see the same uptake in the general public. “The best way to describe it is frustrating,” Parker said. “You’re seeing the numbers going up and a lack of adherence to the advice from the public.”

Florida is unlikely to run out of beds the way New York did, Parker said, but that’s not the only important factor in health-system capacity.

“We know we can pivot,” said Jay Wolfson, senior associate dean for health policy and practice at the Morsani College of Medicine at the University of South Florida. “But once you have fatigue and burnout plus [COVID-19] cases among staff members — that’s a huge problem. When the frontline folks start getting sick and dropping out, you’re in trouble.”

Marta Morales, RN, a nurse at Jackson Memorial’s Ryder Trauma Center says that although few of her colleagues have contracted COVID-19, their stress load has skyrocketed. Nurses from the trauma center have been called on to be floaters on COVID floors. And even harder than working in an unfamiliar setting, she said, is the lag time that comes with testing for COVID-19 and transporting patients to the dedicated floors. Those delays in treating patients haunt her and her colleagues.

“You second-guess your day,” said Morales, who worries that the caution required for COVID patients could hurt their chances of recovering from traumatic injuries. “Sometimes you have a really bad day and you think, ‘Did I cause this? Was it me because I’m trying to stay out of the room so I don’t get affected or took too long putting on PPE?’ ”

“I’ve been doing this for years and I’ve always been fine,” she said. “Now by the third day I’m mentally and emotionally exhausted and my body aches.”

Arizona: “ ’Out at a Scottsdale Nightclub’ Should Be a Codeable Diagnosis.”

During breaks at a hospital in Mesa, Arizona, where emergency medicine physician Quinn Snyder, MD, works, conversations revolve around the status of colleagues who have fallen ill with COVID-19.

Arizona recently became the state with the highest per-capita infections in the world, reporting 123,824 total cases on July 13, including 1357 new cases. The state’s number of new cases skyrocketed from hundreds per day in March, April, and May to a high of 5330 on June 29.

Until recently, no doctors at his hospital had been infected, Snyder said, but in late June two physicians and several nurses fell ill. Shifting policies and schedules have also had a detrimental effect on staff, he said.

“People have been furloughed and brought back, or their hours were cut and brought back — all that uncertainty has caused tremendously poor morale,” said Snyder, who also serves as director of analytics and Arizona regional operations for American Physician Partners.

Even the physical requirements of the job are exhausting. “The new requirements regarding donning and doffing PPE are very taxing,” Snyder said. “It takes a lot more time just to see a patient.”

And as the age of those showing up in emergency departments skews younger, with many cases traced to bars, Snyder is frustrated by the rapid spread that could have been prevented.

“ ’Out at a Scottsdale nightclub’ should be a codeable diagnosis,” he said. “It’s so hard to watch people acting irresponsibly out in the community, going to bars and nightclubs, knowing that I am risking myself and my family going to work and dealing with these issues every day.”

While many younger patients are tested and sent home, severity “runs the gamut,” Snyder said. “A lot [of younger patients] are needing supplemental oxygen. The other day a person in their 30s coded in the emergency department with no comorbidities. We’re deeply concerned about this population as a primary reservoir for the diseases in the rest of the state.”

Many doctors are begging the public to take precautions, but they know it’s too late to change the short-term trajectory. They’re bracing for a devastating couple of weeks.

Sheila Eldred is a freelance health journalist in Minneapolis. Find her on Twitter @MilepostMedia.

Do you have information on how your hospital or health network is responding to PPE shortages, gag orders, or other related issues? Has anyone you know faced disciplinary measures for speaking out? Write to us: [email protected].