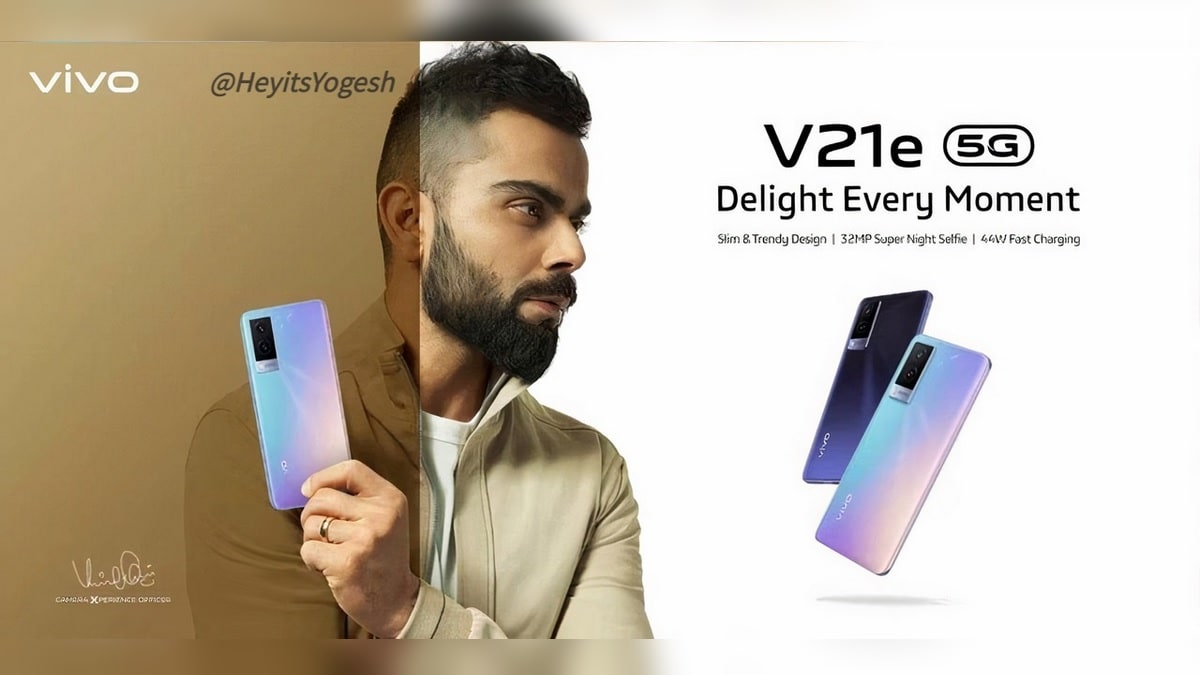 Vivo V21e 5G specifications and design have been tipped via an official-looking poster ahead of its expected India launch. The phone can be seen in two colour options sporting a dual rear camera setup. The poster also mentions a couple of specifications including a 32-megapixel selfie shooter and support for 44W fast charging. Vivo V21e 5G is said to be powered by a MediaTek Dimensity 700 SoC, but, as of now, the company has not shared any information on the specifications of the phone or its release date.

Tipster Yogesh tweeted some key specifications of the Vivo V21e 5G along with what seem to be an official poster of the phone. The poster shows cricketer Virat Kohli, who is a brand ambassador for Vivo, holding the light blue model of the phone; a dark blue variant can be seen as well. The poster mentions support for 44W fast charging and a 32-megapixel selfie camera with a Super Night Selfie feature.

The tipster has also shared some specifications of the Vivo V21e 5G, suggesting that it will feature a 6.44-inch full-HD+ AMOLED display and be powered by a MediaTek Dimensity 700 SoC. The phone is said to come with 8GB RAM + 3GB virtual RAM, along with 128GB of storage. This will probably be one of its configurations. In terms of optics, the phone is said to carry a 64-megapixel primary sensor accompanied by an 8-megapixel secondary sensor. Vivo V21e 5G may come with a 4,000mAh battery and have a sleek design.

In the comments section below his tweet, the tipster adds that there will be a waterdrop-style notch design for the selfie camera and that the Vivo V21e 5G should be launched in the next two weeks for under Rs. 20,000.

Earlier this week, another tipster leaked some of the specifications for the Vivo V21e 5G mentioning the same SoC, display, fast charging support, and configurations as the latest leak. However, the previous leak stated the phone will be backed by a 4,400mAh battery — slightly bigger than the 4,000mAh capacity mentioned by Yogesh.

The Vivo V21e 4G variant launched in Malaysia in April this year and came with a 6.44-inch full-HD+ (1,080×2,400 pixels) AMOLED display, 8GB RAM + 128GB storage configuration, a triple rear camera setup, and a 44-megapixel sensor at the front for selfies. The phone packs a 4,000mAh battery that supports 33W FlashCharge fast charging. At this point, it is unclear which of these features the 5G variant will retain. As mentioned, Vivo has not shared any details about the Vivo V21e 5G yet.