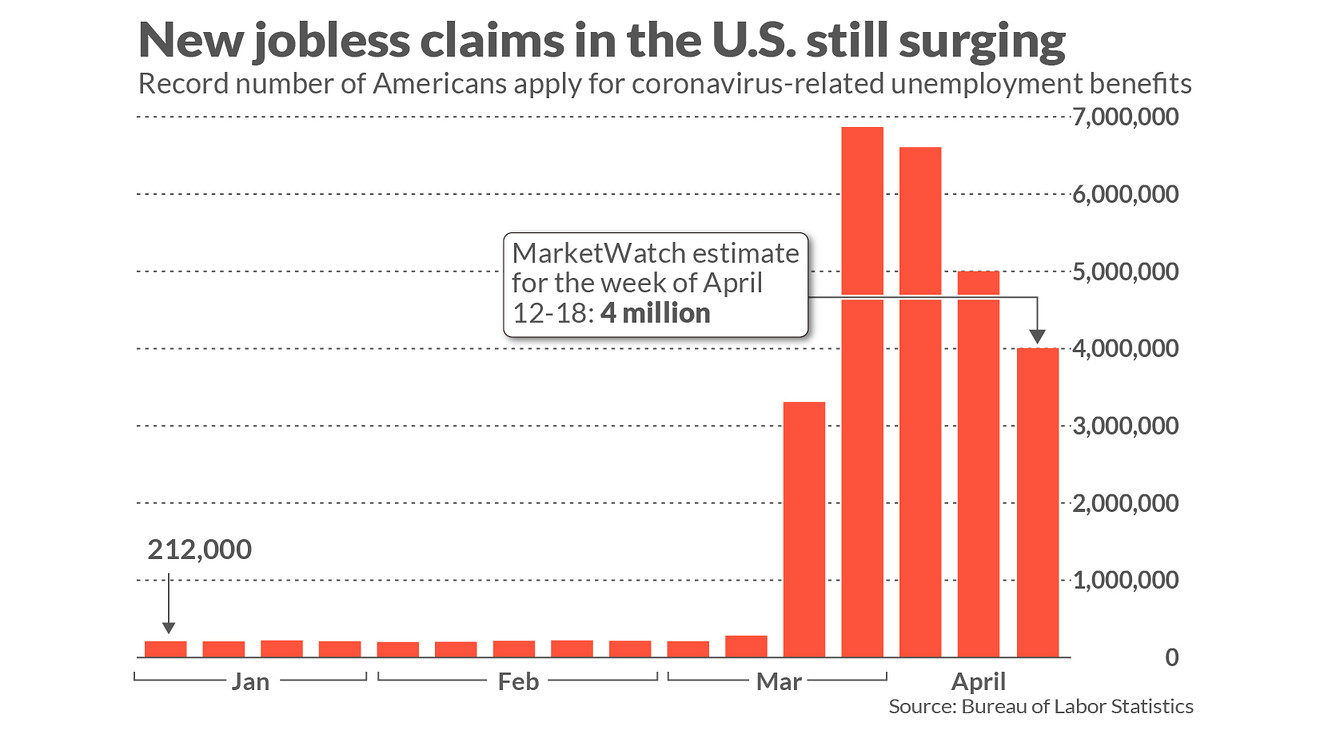 The record surge in suddenly unemployed Americans likely grew by another 4 million last week to push the total to 25 million or more since the coronavirus pandemic shut down large parts of the U.S. economy a month and a half ago.

Initial jobless claims in the seven days running from April 12 to April 18 probably grew by at least 4 million, with estimates ranging as high as 5.25 million, according to the latest MarketWatch survey of economists.

Read: Why the economy’s recovery from the coronavirus is likely to be long and drawn ou

In the prior four weeks, new jobless claims soared by 5.25 million, 6.6 million, 6.9 million and 3.3 million respectively, using figures adjusted for seasonality. The actual amount of applications was a bit lower but still breath-taking.

Just two month ago, new claims were in the low 200,000s per week and sat near a half-century low.

Read: Expanded unemployment benefits: Who qualifies, how to apply

The pace of new claims is likely to stay extremely high for at least several more weeks.

“We continue to expect a gradual decline from here onward, although jobless claims are still set to remain on levels in the millions,” Morgan Stanley economists wrote Wednesday in a fresh assessment.

Economists estimate the unemployment rate has leaped above 15% unofficially and is still going up. In February, the jobless rate had matched a 50-year low of 3.5%.

Read:Being furloughed beats layoffs: What it means for millions of now jobless workers

The torrent of new claims has overwhelmed many states. Some have had great trouble processing all the applications and others are already running out of money. While Congress has stepped in to help with billions in extra benefits, states are expected to seek more aid.

Another hiccup has been inability of states to process the claims of people previously not eligible but who now quality under loosened federal rules. They include self-employed people such as authors and Uber
UBER,

drivers. Eventually those claims will be processed correctly and added to the totals.