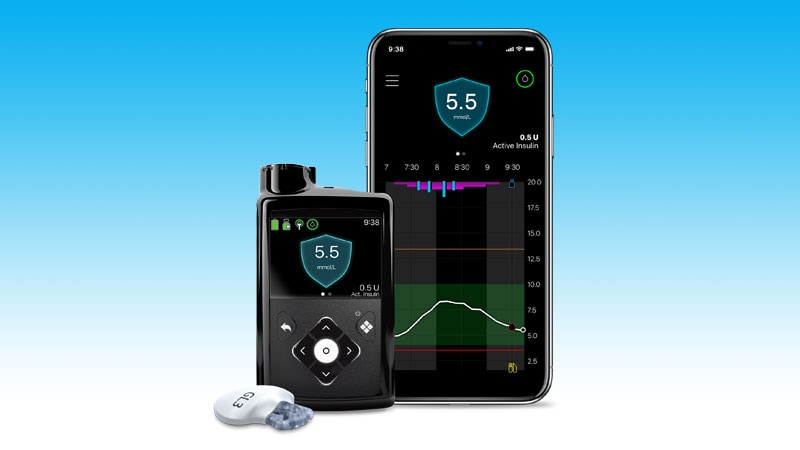 The MiniMed 780G system (Medtronic) advanced hybrid closed-loop insulin delivery system aimed at simplifying the management of type 1 diabetes is now available in the UK for people aged 7 to 80 years.

Medtronic says the new 780G irons out many of the problems with the previous version, the MiniMed 670G.

The MiniMed 780G is now available in 23 countries worldwide, including much of Europe — having received the CE mark in the EU in June 2020 — South Africa, and parts of the Middle East.

The 780G isn’t approved in the United States but a pivotal trial has been conducted to support any future application to the US Food and Drug Administration.

In the UK, the MiniMed 780G is available through the National Health Service (NHS), subject to an assessment of clinical need by a healthcare professional.

Two new features of the MiniMed 780G compared with the MiniMed 670G are Bluetooth connectivity and automated bolus correction doses in addition to basal insulin every 5 minutes, which uses Medtronic’s SmartGuard algorithm.

So users still need to count carbs and calculate their premeal bolus doses of insulin, but if they forget or miscalculate, the system automatically corrects it to target without user input. The adjustable blood glucose target can be set as low as 5.5 mmol/L (100 mg/dL), compared with the previous target of 6.7 mmol/L (120 mg/dL). And as with the 670G, the 780G will still suspend insulin delivery for a predicted low glucose level.

“A Huge Step Forward“ for Those With Type 1 Diabetes

“This is a huge step forward for the management of patients with [type 1] diabetes,” in the UK, he remarked.

“No two days are the same,” when it comes to blood glucose levels in such patients, he said, and this variability “presents a huge challenge that can increase diabetes distress.”

By using the MiniMed 780G, patients can reduce such variability and endeavor to maintain glucose levels within normal parameters.

“We want to reduce the long-term complications of diabetes, for example, hypoglycemia, which in extreme circumstances can lead to loss of consciousness,” he remarked.

“In contrast, if the blood sugar levels are too high, there is risk of loss of sensation, kidney failure, risk of blindness, stroke, heart attack, and amputations.”

New Technology Aims to Overcome Setbacks of the 670G

The novel Bluetooth connectivity used in the 780G model means patients and their clinicians can see real-time glucose data and trends on compatible iOS and Android smartphones via the CareLink Connect App, said Kamaruddin.

“It means I can remotely monitor my patients, which is very timely with COVID-19 right now,” he pointed out.

Medtronic says the new MiniMed 780G system overcomes some of the reported problems of the 670G system. In 2019, Medscape Medical News reported on a study that found 38% of patients who started using the 670G stopped using it within an average of 9 months.

Reasons for stopping use included frequent alarms, forced exits from auto mode so users had to switch back to manual mode, calibration requirements, premature sensor failure, skin adhesion problems, and sensor supply problems. The majority withdrew because they were kicked out of auto mode into manual.

Ali Dianaty, vice president, product innovation, Medtronic, told Medscape Medical News that the company had learned and drawn from feedback on the MiniMed 670G from hundreds of thousands of users to update the system.

“Now it functions more appropriately and minimizes the alarms and alerts. The ones that matter remain,” Dianaty explained.

“Also, it tries to keep people in auto mode as much as possible, in contrast to the prior system where even the potential for something to be awry put users back into manual mode.”