Home > Business > U.S. unemployment claims sink to pandemic low of 364,000 as extra benefits start to get phased out

U.S. unemployment claims sink to pandemic low of 364,000 as extra benefits start to get phased out 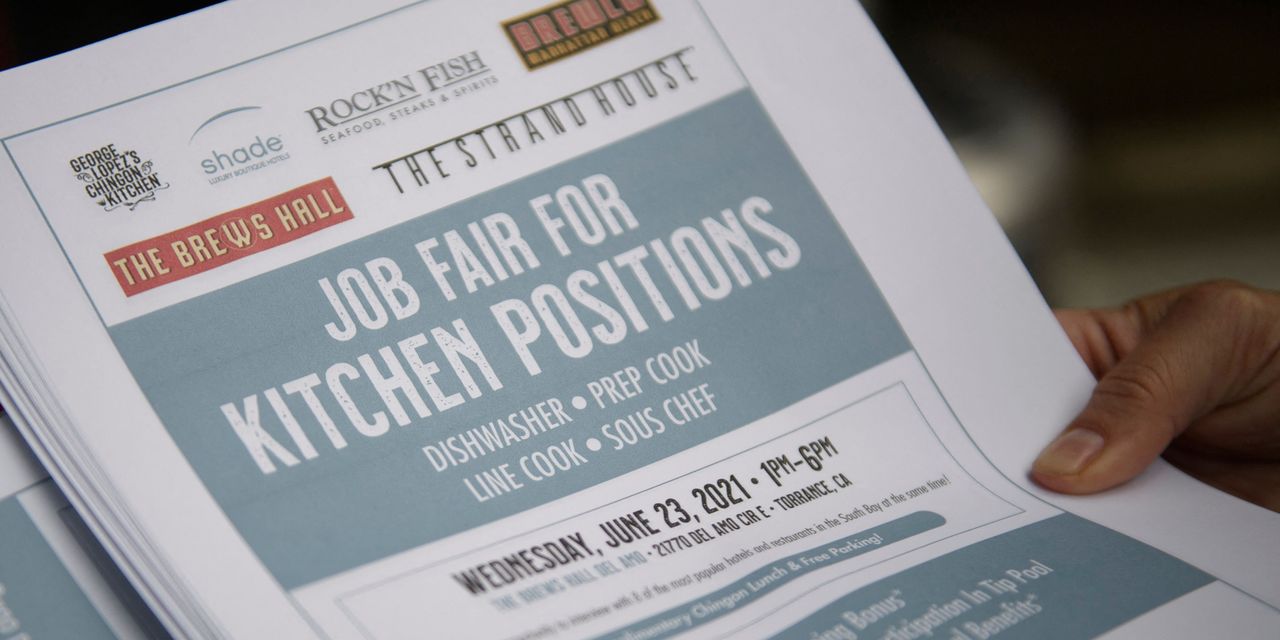 The numbers: New applications for unemployment benefits sank by 51,0000 last week to a new pandemic low of 364,000, underscoring a rapid recovery in the U.S. economy and more aggressive efforts by companies to hire workers.

The decline in new claims was bigger than expected. Economists surveyed by The Wall Street Journal had forecast new claims would total a seasonally adjusted 390,000 in the week of June 26. These are traditional benefits paid by the states.

An additional 115,267 applications for benefits were filed through a temporary federal-relief program set up during the pandemic, the government said Thursday.

The number of people applying for state or federal benefits each week is still more than double the pre-pandemic average. They’ve fallen more slowly in the past few months despite record job openings and stepped-up attempts by many businesses to add staff.

Some 26 states are cutting off extra federal benefits by early July in an attempt to nudge the unemployed to find work. Economists are watching closely to see if it spurs more people to accept a job, but so far there’s too little evidence to tell.

Read: The U.S. economy is running ‘very hot’, IHS Markit finds, and so is inflation

Big picture: The economy has made a remarkable recovery from the coronavirus, but the pandemic has left a lot of scars. Many people are still afraid to go back to work. Some can’t return to their old jobs because they’ve disappeared. And others still lack options for the care of their kids or elderly relatives.

Extra federal benefits also getting some blame. Businesses contend the money has kept people from accepting job offers because in some cases they can earn more staying at home than by going back to work.

Whatever the case, the federal benefits are set to expire in all states in September. By then, schools, day-care centers and senior-care facilities are likely to be fully open and allow most people to go back to work.

The details : New jobless claims posted the biggest decline in Pennsylvania, where a modern system for handling applications was recently installed. It’s unclear to what extent the changeover has affected the state’s claims totals.

The number of people already collecting state jobless benefits, meanwhile, rose by 56,000 to a seasonally adjusted 3.47 million in the week ended June 19. These so-called continuing claims had dropped to a pandemic low in the prior week.

The temporary federal programs end in September, but new and existing federal claims should start to fall more rapidly in the next few weeks as states opt out.

Fewer than 2 million people were getting benefits before the viral outbreak.

Note to readers: A government review found the number of distinct individuals collecting benefits has been inflated by fraud and double counting.

What they are saying? “The level remains high by historical standards, but the trend is lower,” said chief economist Scott Brown of Raymond James.

“While it would be tempting to tie this drop to the end of supplemental benefits in some states, the state-by-state data do not support that story,” said chief economist Stephen Stanley of Amherst Pierpont Securities.

“In fact, a good deal of the swings in recent weeks have come from Pennsylvania, a state that has reportedly recently upgraded its UI computer systems and has exhibited massive volatility in its weekly count for about a month now,” he noted.

were set to open higher in Thursday trades.