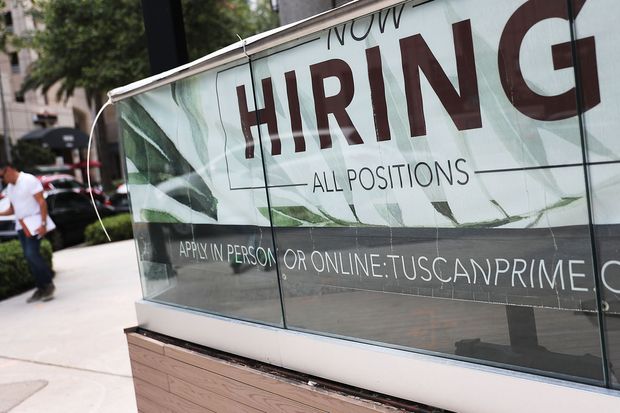 The numbers: The U.S. created just 266,000 new jobs in April even as the economy gained strength, suggesting companies might be struggling to fill open jobs even with millions of people still unemployed.

The official unemployment rate, meanwhile, rose to 6.1% from 6%, the U.S. Labor Department said Friday. Yet the first increase in 13 months stemmed from more people entering the labor force in search of jobs — a good sign for the economy.

The small increase in new jobs belies mounting evidence that companies are eager to hire more workers in response to soaring demand for goods and services.

Job openings have surged, for instance, and a survey of small businesses showed that 60% tried to hire people in April.

Read: The biggest part of the economy is surging and rehiring workers

The momentum in the economy is unlikely to fade anytime soon, either. Rising vaccinations and falling coronavirus cases have allowed states to lift business rules and encouraged Americans to resume normal activities. They are going out to eat, traveling or taking their first vacation in more than a year.

At the same time, the government is pumping trillions of dollars of stimulus into the economy in a bid to restore growth as quickly as possible.

These companies were hit the hardest during the pandemic and are now benefiting the most from a more open economy. Americans are itching to get out after being most stuck at home for the past year.

Yet even as customers return and sales surge, businesses say it’s harder to find employees. They complain that generous emergency unemployment benefits have dissuaded some workers from accepting jobs. Extra benefits expire in September.

Perhaps a bigger problem are limited options for adults taking care of young children or older relatives. They might not be able to return to work full time until day care centers, schools and nursing home are all fully reopen.

Those issues likely contributed to the relatively small increase in hiring.

Employment by local governments, meanwhile, also rose 31,000 in April as more schools reopened. Lots of bus drivers, cafeteria workers and other personnel had been unable to work with schools closed.

What’s more, the number of new jobs created in March was not quite as strong as previously reported, revised government figures show. The initially reported 916,000 increase in employment was reduced to 770,000.

The official jobless rate, now 6.1%, also understates the true scope of unemployment, economists say. They estimate the real rate is several points higher because laid-off workers who stopped looking for jobs are not counted.

The good news is, more people are reentering the labor force as “now hiring” signs pop up everywhere. The size of the labor force grew by 430,000 in April to 161 million.

The labor force had peaked at a record 164.5 million shortly before the pandemic, but the number of people who had jobs or were looking for one plunged by 8 million in the immediate aftermath.

Big picture: The shortfall in new jobs in April is likely just temporary. Falling coronavirus cases and massive federal stimulus have turbocharged the economy and job openings have surged. The U.S. is still set up for a summer of strong growth, especially if the virus is mostly squelched.

Read: Unemployment claims drop below 500,000 for first time since pandemic

The economy is still missing more than 8 million jobs that existed before the crisis, however, not to mention the 2 million jobs that would likely have been created had the pandemic never happened at all. It will probably take a year or two to get them all back.

were set to open mixed in Friday trades.