Home > Health > Type 1 Diabetes and Transgender Identity: Is There a Link?

Type 1 Diabetes and Transgender Identity: Is There a Link? 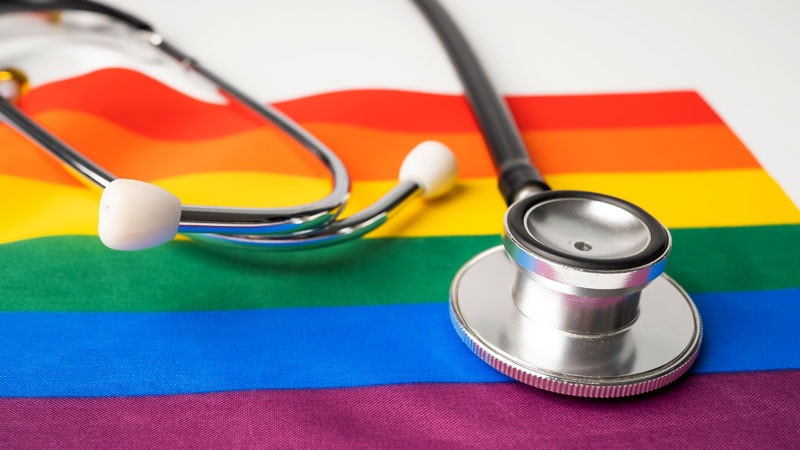 The prevalence of type 1 diabetes among transgender and gender diverse patients is higher than in the general population, research suggests.

This has been reported by three groups. In two studies, the cohort comprised children; in the other, older adults.

One article documents a nearly fivefold higher rate of type 1 diabetes among youths who attended an urban gender program. The study, by Johsias Maru, of the Department of Endocrinology, Boston Children’s Hospital, Boston, Massachusetts, and colleagues, was published online February 15 in Transgender Health.

In the two studies of youth cohorts, there was some evidence that glycemic control improved at least transiently following initiation of gender-related care.

“The psychological benefits of gender-affirming treatment are well known and consistent…. Just listening to these kids and affirming them and using their right names and pronouns is huge, and that has incredible benefit…. If you’re in a better mental state, you can care for your diabetes better,” endocrinologist Kate Millington, MD, the second author of the Boston Children’s Hospital study, told Medscape Medical News in an interview.

The second children’s study, which was conducted in Wisconsin and was published in Pediatric Diabetes in November 2019, also reported an increase in the prevalence of type 1 diabetes among patients diagnosed with gender dysphoria.

The first report of this associatiation was published in 2017 in Sexual Medicine. Justine Defreyne, MD, and colleagues at the Ghent University Hospital, Ghent, Belgium, documented a 2.3-fold higher prevalence of type 1 diabetes mellitus among adult transgender patients than in the general Belgian population.

Theories Include “Minority Stress” and Proximity to Care

There are several hypotheses about the connection, Millington says.

One is “minority stress,” whereby the chronic pressure of feeling different from one’s peers might serve as a trigger among those genetically predisposed to type 1 diabetes or other autoimmune conditions.

“We know kids who are sexual and gender minorities live with a great deal of stress just by their very existence that’s independent of when they come out to their families. They might live for years with this knowledge of feeling different and not really knowing how to explain it. And that can take a toll in the body that we don’t really have the ability to measure,” Millington explains.

Because the majority of participants in the three cohorts had been diagnosed with type 1 diabetes prior to presenting for gender-related care, another possibility is that these patients have more interactions with the healthcare system, specifically with endocrinologists.

At Boston Children’s, the diabetes and gender program clinics are in the same facility.

“These are kids who have access to healthcare…. A lot of pediatric clinics in large institutions that care for kids with diabetes are also keyed in with the trans clinic, so the waiting rooms might have the trans flag or rainbow flag or some kind of indication of acceptance,” Millington acknowledges.

The situation with the adult group in Belgium was different. There, patients received diabetes care from local diabetologists, not at the transgender care referral center of Ghent University Hospital.

“However, the fact that a trans-person is seen by a peripheral endocrinologist for follow-up of type 1 diabetes mellitus can increase the possibility that this person would be referred to an endocrinologist specialized in transgender care,” Defreyne and colleagues wrote in 2017.

Among 1114 patients seen at the Boston Children’s Hospital Gender Multispecialty Service during the period 2007–2018, 10 had previously been diagnosed with type 1 diabetes, and another patient was diagnosed within 2 weeks of their first gender clinic visit. The prevalence rate of type 1 diabetes was 9.87 per 1000, which is 5.11 times the expected rate of 1.93 per 1000 in the general population.

The Wisconsin team, led by Santhi N. Logel, MD, in the Division of Pediatric Endocrinology and Diabetes, University of Wisconsin–Madison School of Medicine, Madison, Wisconsin, extracted electronic data for the period November 2007 to November 2017. Among youths and young adults aged 10–21 years, 315 were diagnosed with gender dysphoria, and 2017 were diagnosed with type 1 diabetes. The prevalence rates were 0.42 and 2.69 per 1000, respectively.

The Belgian cohort included 1081 adult transgender patients, of whom 10 had previously been diagnosed with type 1 diabetes or latent autoimmune diabetes of adulthood. The rate was about 2.3 times higher than expected.

Differences by Age, Type of Gender Discordance Found Across Groups

In the Boston group, the mean age at diagnosis of type 1 diabetes was 8.5 years, significantly younger than the average 14.5 years in the general US population with type 1 diabetes.

In contrast, the average age at first visit to the gender service was older for those with type 1 diabetes than for those without diabetes, at 16 vs 13 years.

Millington observes that a younger age at the time of type 1 diabetes diagnosis would align with the triggering hypothesis. “We did find that the kids in our cohort presented with their diabetes earlier than we would expect,” she said.

She acknowledges that it’s difficult to ascertain when feelings of gender discordance begin.

“Kids just don’t have great memories. Also, for a lot of these kids, it’s just been their identity their entire life. We always try to get this variable, and it’s very, very hard to get a reliable estimate,” she said.

The proportion of individuals assigned male sex vs female sex at birth prior to transitioning differed across the three cohorts.

In Boston, the majority of patients ― 9 of 11 ― were designated female at birth and had transmasculine identities. The Wisconsin group was mixed ― three identified as transfeminine, three as transmasculine, one as “gender fluid,” and another “gender neutral.”

In Belgium, among the adults, 8 of the 10 were male to female.

These differences reflect an overall shift in the gender-diverse world, Millington says.

“Traditionally, they were transfeminine, so born with male anatomy who identify as female…. Now, that is shifting dramatically. We see far more transmasculine individuals, female at birth with male gender identities. We see that 2 to 1. It’s really dramatic. Many clinics have reported this.”

Millington said that although there are many theories as to why, “It’s probably just more about what society will accept than something in the water.”

In Wisconsin, four adolescents received puberty-blocking therapy, and two received estrogen and testosterone for gender-affirming therapy. Although glycemic control initially improved after the first gender clinic visit, there were no improvements in A1c level following the hormonal treatments.

Millington notes that both puberty and sex steroids increase insulin resistance and therefore could worsen glycemic control, but “I think the psychological benefit outweighs that.”

Asked how she might counter arguments against providing this kind of treatment to young patients, she observed, “You have to think about are you doing what’s best for the child, or for yourself?

“A lot of times, we have our own fears and biases, and at times we let that blind what is actually best for the child in front of us…. I think all it takes is for you to meet a transgender person and hear their story. It’s really transformational.”