Trump official campaign website shut down after appearing to be hacked 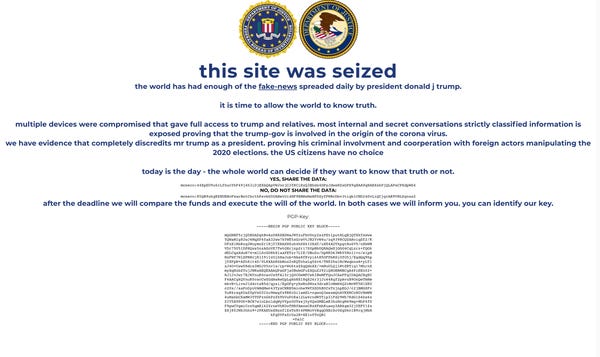 The official campaign website for President Donald Trump was taken offline briefly on Tuesday evening after hackers appeared to take control of it, as earlier reported by KQED reporter Gabriel Lorenzo Greschler.

“The world has had enough of the fake-news spreaded daily by president donald j trump,” the apparent hackers said in a message posted on the site. “It is time to allow the world to know truth.”

The apparent hackers claimed that “multiple devices were compromised that gave full access to trump and relatives,” purportedly giving them access to “classified information” showing that the Trump administration was involved in the “origin of the corona virus” and that the president had colluded with foreign actors to manipulate the 2020 elections.

There is no evidence that the apparent hackers have accessed such information.

They also included addresses for two cryptocurrency wallets as part of a possible scam, urging visitors to the site to “vote” for whether the alleged damaging information should or shouldn’t be released by sending money to one of the two wallets.

“Earlier this evening, the Trump campaign website was defaced and we are working with law enforcement authorities to investigate the source of the attack,” Trump campaign spokesperson Tim Murtaugh tweeted. “There was no exposure to sensitive data because none of it is actually stored on the site. The website has been restored.”

Also last week, Trump told supporters at a campaign rally in Arizona, incorrectly: “nobody gets hacked. To get hacked you need somebody with 197 IQ and he needs about 15% of your password.” As TechCrunch reporter Zach Whittaker noted, Trump’s hotel chain was hacked twice, once from May 2014 to June 2015 and once from August 2016 to March 2017.

Trump has come under fire before for his lax cybersecurity practices, notoriously refusing to use a secure cellphone despite his staff’s repeated warnings that using an unsecured device could expose him to foreign surveillance.

Reuters reported in September that earlier this summer attempted hacks against Trump’s campaign and business websites reached record levels. Private cybersecurity firms and US intelligence agencies have repeatedly said that foreign governments are actively seeking to interfere in the US presidential election, at times by targeting people and organizations affiliated with both Trump and Democratic nominee Joe Biden.