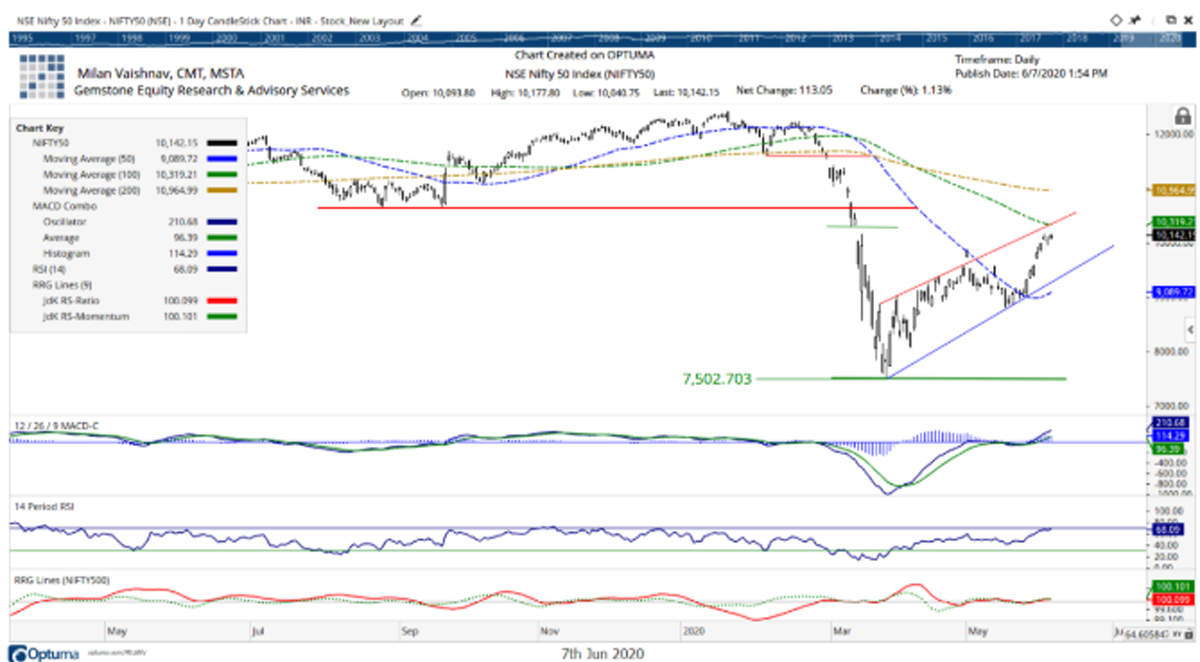 The domestic equity market continued to inch higher on Friday after a day’s breather and ended yet another day with gains. Liquidity continued to chase equities amid a risk-on setup and Indian equities gained along with the buoyant global markets. After a positive start to the session, the indices saw some modest weakness as they pared opening gains in the first hour of trade. However, the market stayed in a steady rising trajectory for the remaining part of the session and the headline indices ended the session with net gains of 113.05 points, or 1.13 per cent.

The typical characteristic of a risk-on environment, where a gush of liquidity chases any asset class, is that it continues to defy technical levels. Nifty has risen in seven out of past eight sessions and is now overdue for some correction or consolidation from current levels. Since liquidity continues to chase equities, the targets at higher levels become somewhat irrelevant and traders should continue to keep trailing stop losses as they follow the rally.

The Relative Strength Index on the daily chart stood at 68.09. It has marked a fresh 14-period high, which is a bullish signal. The RSI, however, remains neutral and does not show any divergence against price. The MACD remains bullish, as it trades above the signal line. Apart from a white body that emerged, no significant formations were noticed on the candles.

Pattern analysis showed Nifty has moved past its 50-DMA and remains in a rising channel. The potential resistance point in the current pattern setup stands the 100-DMA, which now stands at 10,319.

Overall, despite the ongoing up-move, Nifty has continued to show signs of exhausting the momentum of the current up-move. In the event of Nifty inching higher, the 100-DMA level, which currently stands at 10,319, is likely to act as a major short-term resistance for Nifty on a closing basis. We reiterate approaching the market with a great deal of caution and chasing the trend only with strict trailing of stop losses as the market remains highly prone to a profit taking at higher levels.

Milan Vaishnav, CMT, MSTA, is a Consulting Technical Analyst and founder of Gemstone Equity Research & Advisory Services, Vadodara. He can be reached at [email protected])