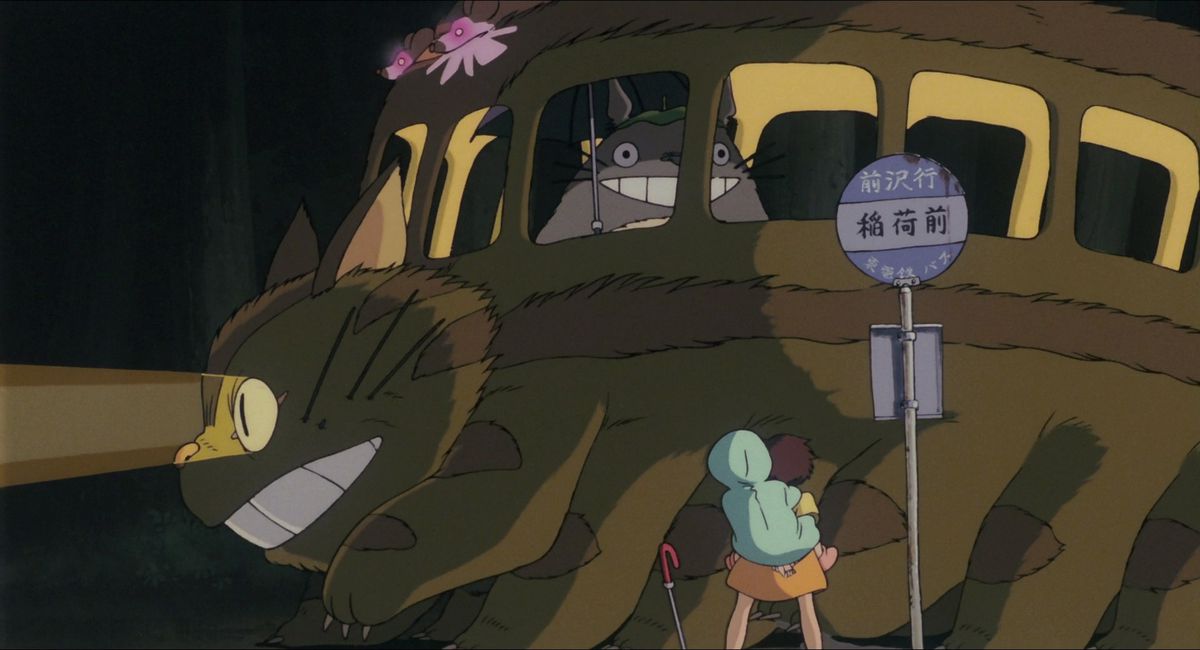 May 25-30 is Studio Ghibli Week at Polygon. To celebrate the arrival of the Japanese animation house’s library on digital and streaming services, we’re surveying the studio’s history, impact, and biggest themes. Follow along via our Ghibli Week page.

Studio Ghibli’s movies always look and feel like they’re on the move. Throughout the Ghibli catalog, transportation often plays a major role in storylines or character development, so much so that car trips or plane flights almost always carry some extra layer of significance. Ghibli’s movies use planes, trains, buses, boats, and cars to herald the start of an adventure, or serve as a prelude before something extraordinary happens to the heroes. Public transportation can give characters a spiritual pause, a chance to reflect on where they’ve been, and where they’re heading next. Actually flying a plane isn’t just an act of skill and courage, it can also represent a meditation on the human toll of its use as a weapon, or the opportunity to save the day before it’s too late.

Hayao Miyazaki’s movies in particular tend to have fantastical modes of transportation. The heroine of his pre-Ghibli movie Nausicaä of the Valley of the Wind uses a futuristic wind glider to travel between her lush, green village and the toxic post-apocalyptic world that surrounds them. In his Little Mermaid riff Ponyo, magic turns a child’s toy boat into a full-sized one, fit for a rescue mission. The movie later uses the image of boats returning to the harbor to show the restoration of balance between man and nature. Magical transport in Miyazaki movies can also take the form of otherworldly creatures, like when Chihiro of Spirited Away rides a flying dragon, or San of Princess Mononoke uses a giant wolf to defend her forest home.

And possibly no form of magical transportation in Ghibli movies is more recognizable than the friendly Cat Bus of My Neighbor Totoro. Waiting for their father’s bus during a rainstorm, young sisters Satsuki and Mei see the bearish forest spirit Totoro board a different kind of bus than the one they were expecting. The many-legged Cat Bus has a Cheshire-sized grin, eyes like headlights illuminating whatever it’s looking at, and a stubbed fluffy tail trailing behind it.

Later, Totoro summons the Cat Bus so the sisters can go see their mom in the hospital. The movie perfectly captures the girls’ excited reactions to sitting inside a living, breathing bus with a furry interior. The Cat Bus moves like an animal, and runs up trees like an animal, but its design includes windows, seats, and glowing-eyed rats that serve as running lights. It’s a strange beast, but an unforgettable way to travel through the worlds of Studio Ghibli — and a reminder that even the spirit world has its fanciful equivalent of the mundane objects we take for granted.

Trains in Ghibli movies tend to be a much calmer form of transportation, unless an accident strikes, as it does in Miyazaki’s biopic The Wind Rises. Even then, the dramatic event ends up introducing its idealistic plane engineer Jiro to his future wife Naoko. More often than not, trains in Ghibli movies connect characters with their past or future, giving them a chance to reflect on where their journeys have taken them. In Isao Takahata’s Only Yesterday, Taoko’s train doesn’t just transport her from Tokyo to the countryside, it also takes her to her childhood memories of first love and growing up, setting her up to re-evaluate what she wants for her future.

These journeys can also take a spiritual turn, as they do in Takahata’s Grave of the Fireflies. The film has perhaps one of the bleakest openings in any Ghibli movie, starting with a scene of a train station in post-war Japan, where a forlorn boy dies in plain sight of passersby. His spirit joins his sister’s, and the two board a ghost-train that leads them into a flashback retelling of their tragic story. The train continues to appear in various portions of the film, each memory a stop marking their inevitable decline. The train is empty except for these two young souls in the spiritual realm, but we see it full of life in the past.

A spirit-train also plays a significant part in Miyazaki’s Spirited Away when the protagonist, Chihiro, has to go on a spiritual quest to make amends with her boss’ twin sister. If she fears that the new witch she’s about to meet might be scarier than her twin, or wonders how she’ll get back to the bathhouse where she works, given that the train only goes in one direction, Chihiro doesn’t show it. She bravely steps aboard the curious train, which glides along the endless waters around the bathhouse. It’s a stunning, surreal scene, and Chihiro’s wistful patience contrasts sharply with her sullenness at the start of the film, traveling in a car with her parents. On the train, she has a purpose.

Thanks to his family connections, Miyazaki grew up around plane designs, and was fascinated with aviation. He worked different aspects of flying into many of his movies, whether by magical means in Howl’s Moving Castle and Kiki’s Delivery Service, or through more mechanical options in Porco Rosso and The Wind Rises.

The latter two films also serve as benchmarks of how Miyazaki’s views of planes have evolved from a source of fascination to a nuanced acknowledgment of what planes can do as weapons. Porco Rosso is a fantastical story of a good-hearted but cursed bounty hunter who runs afoul of scheming air pirates and the fascist Italian government after World War I. He’s a duty-bound, honorable fighter who wrestles with his feelings for a longtime flame, and his insecurity over the curse that turned him into an anthropomorphized pig. While still wildly entertaining, Porco Rosso takes aviation on its simplest terms. Flying is the gateway to a story about lost love, living like an outsider, survivor’s guilt, and other themes, but it doesn’t examine the role of the biplanes and seaplanes populating this make-believe Europe.

Miyazaki’s most recent film, The Wind Rises, takes a more nuanced approach to avionics and their role in Japanese history. Jiro, the movie’s main character, embodies Miyazaki’s longstanding fascination with airplanes, but the film also acknowledges that these wondrous contraptions that help everyday people defy gravity on a daily basis also claimed a lot of lives in war. Over the course of the film, Jiro starts out so enamored with flying that he makes an imaginary friend out of a historical pilot. But he comes to regret his dedication to creating planes when his earnest passion is weaponized by the government, as his plane design becomes a major part of the war effort. Jiro is caught in a Catch-22 situation — his creations possibly only became possible because of wartime funding, but many people died because of his idealistic engineering zeal. It’s a troubled legacy, one we’re still dealing with decades after the events in the film.

So whether by air, sea, road, or magic, travel in Studio Ghibli movies is just as important as the destination ahead. Any time someone’s on the move, it’s generally either the most action-packed scene in a movie, or among the quietest moments. These trips develop characters and extend the plot even in movies that aren’t expressly about the ability to fly, or the know-how to summon a Cat Bus. However these moments play out in Ghibli films, they’re kind reminders that we should give ourselves a little more time to look out the windows on our next trip, and watch the scenery zip by before it becomes only a memory.

A deep dive into this week's best PC Gamer for...