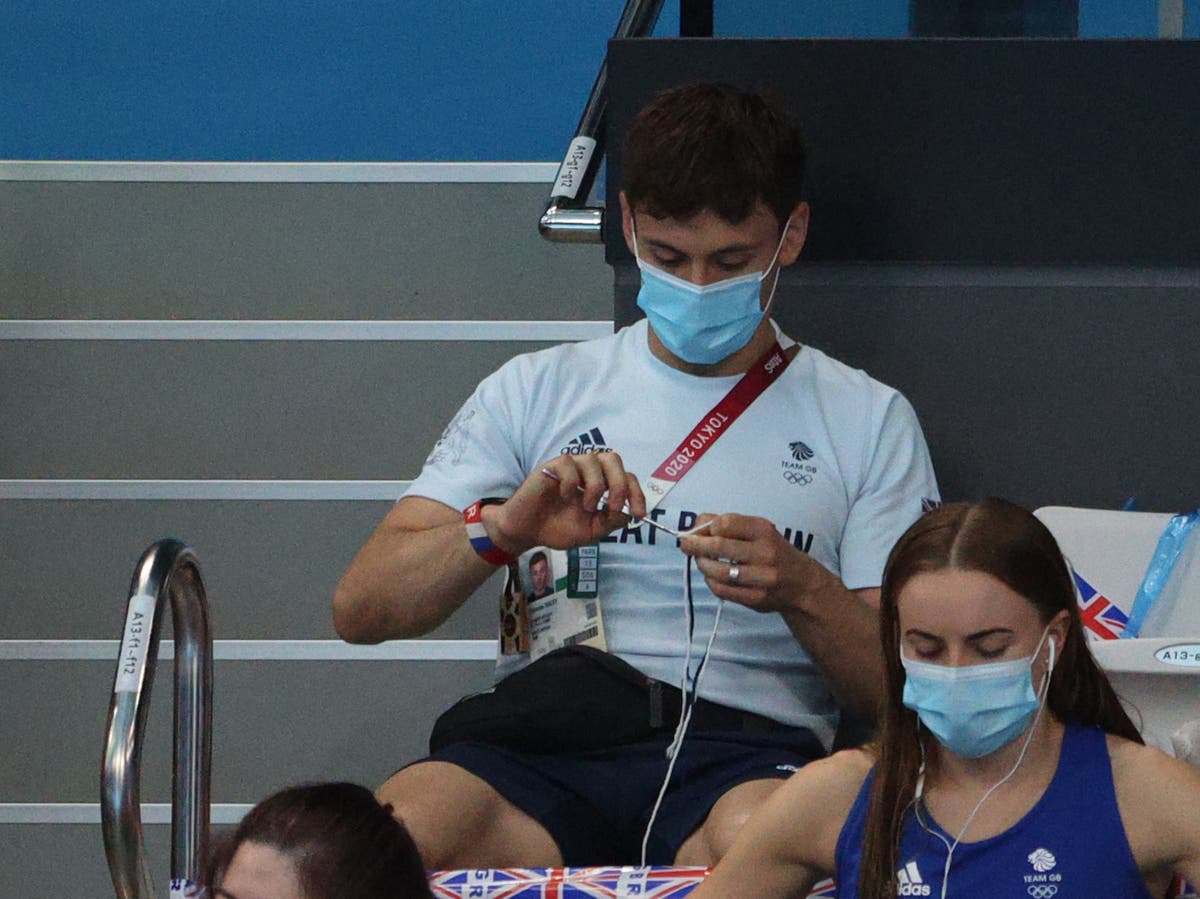 After much anticipation, Tom Daley has treated fans to a first look at the fruits of his labour after he was spotted knitting at the Tokyo Olympics.

The Olympic gold medalist sent the internet into a frenzy last weekend when he was photographed knitting a purple “doggy jumper” while watching the women’s 3-metre springboard final on Sunday 1 August.

He was accompanied by his needles and yarn again on Monday, 2 August, when he was seen knitting a union flag. He later revealed on social media that it was a part of a cardigan.

In a video posted to Instagram on Thursday, 5 August, the swimmer gave fans a 360-degree view of the finished garment.

“So I finished the jumper and here we are,” he said, debuting a cream cardigan with ribbed cuffs and edging.

The front of the jumper features the word “Tokyo” written in Japanese. Each arm is also embroidered, one with a Union Jack and the other with “GBR”.

As he turned around, the words “Team GB” could be seen in a large, red font on the jumper’s back with the five Olympic rings sewn underneath.

“When I got to Tokyo, I wanted to make something that would remind me of these games. Something that I could say I had made in Tokyo, during the Olympics!” he wrote in the caption.

“On the back I went for a classic @teamgb logo, the shoulders have a flag and GBR on them. For the front I wanted to keep it simple and I tried my best to embroider TOKYO in Japanese!” he added.

The cardigan has proven a hit with the swimmer’s fans, garnering more than 250,000 likes since the video was posted.

“Too amazing for words! And love that it’s got almost a kimono style for the cardigan! You’ve made all the knitters and makers in the world sit up a little straighter with pride to see such a fantastic display of making in a public forum,” one person wrote.

It is the latest item revealed by the swimmer on his second Instagram account, Madewithlovebytomdaley, which is dedicated entirely to his passion for knitting.

The pouch features a Union Jack on one side and a Japanese flag on the other.

“I made a little cosy for my medal to stop it from getting scratched,” he said in a video as he tucked the medal inside.

Last year, the father of one told BBC Sport that knitting is his “secret weapon” to staying calm.

He said: “There are loads of things I’m doing to keep myself going, like yoga and visualisation, but I’ve also taken up knitting, which could be my secret weapon.

“It’s part of my mindfulness routine, a way of escaping from everything for a while, and I’ve made all kinds of things like scarves and little hats for my son [Robbie].”