Home > Phone > Tipster says that this is the European pricing for the Fold 3, Flip 3 and Buds 2

Tipster says that this is the European pricing for the Fold 3, Flip 3 and Buds 2 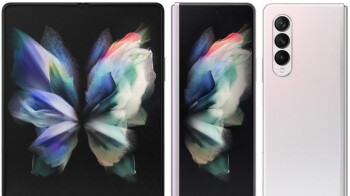 On August 11th we should see Samsung unveil its next-generation foldable phones including the Galaxy Z Fold 3 and the Galaxy Z Flip 3. Yesterday, Twitter tipster SnoopyTech tweeted what he says are the European prices for these phones along with rumored pricing for the Buds 2 on the continent. According to the tipster, the 256GB model will be priced at 2009€ ($2,384 USD) and the variant with 512GB of storage will be priced at 2099€ ($2,490 USD).
The Twitter tipster also posted what he says will be the prices for the Galaxy Z Flip 3 clamshell. The unit sporting 8GB of memory and 128GB of storage will cost 1029€ ($1,221 USD). With 256GB of storage, the device will cost 1109€ ($1,316 USD). Lastly, the Galaxy Buds 2 True Wireless Stereo earbuds could be priced at 170€ ($200 USD).

Even if this pricing is legitimate, converting Euros to U.S. Dollars won’t reveal the exact state-side pricing of the device. Last year, when Samsung introduced the Galaxy Z Fold 2, it was priced at 1,930€ for the 256GB model, the conversion to U.S. Dollars came to approximately $2,290 while the actual U.S. retail price was $2,000.
What makes us not as confident about this rumored pricing is an earlier report from SamMobile claiming that the manufacturer, in a bid to get its foldable phones into more hands, will cut the price of the new Fold and Flip devices by 20% taking the price of the 2021 models down to $1,599 and $1,159, respectively. Still, the tipster claimed in a separate tweet that the prices he posted were from an unnamed retailer.

The Galaxy Z Fold 3 will carry a 7.5-inch tablet-sized display with the device open, and there will be a 6.2-inch exterior screen. The phone will support the S Pen and will feature the Snapdragon 888 under the hood with 12GB/16GB of RAM and 256GB/512GB of storage. We expect to see a triple camera setup on the back, a 4380mAh battery, and availability in black, green, and white.

The Galaxy Z Flip 3 will fit easily in your pocket and opens to reveal a 6.7-inch Dynamic AMOLED display with an FHD+ resolution and a thin and tall 22:9 aspect ratio. The clamshell device will be powered by the Snapdragon 870 chipset.

The Galaxy Buds 2 should be offered in White, Black, Purple, and Green. The square carrying case will be white on the outside while the interior will match the color of the Buds themselves. The case will deliver 2.5W wireless charging thanks to a 500mAh battery which nearly doubles the capacity of last year’s component. On the other hand, the battery inside each earbud will decline to 60mAh from the 85mAh capacity batteries used to power the 2020 model.

Despite the decline in battery capacity, users could go 20 hours between charges using noise cancellation. With the latter feature disabled, playback time is 29 hours.

In just a few days when Samsung holds its next Unpacked event, we should be able to see just how accurate SnoopyTech was with his pricing leaks.