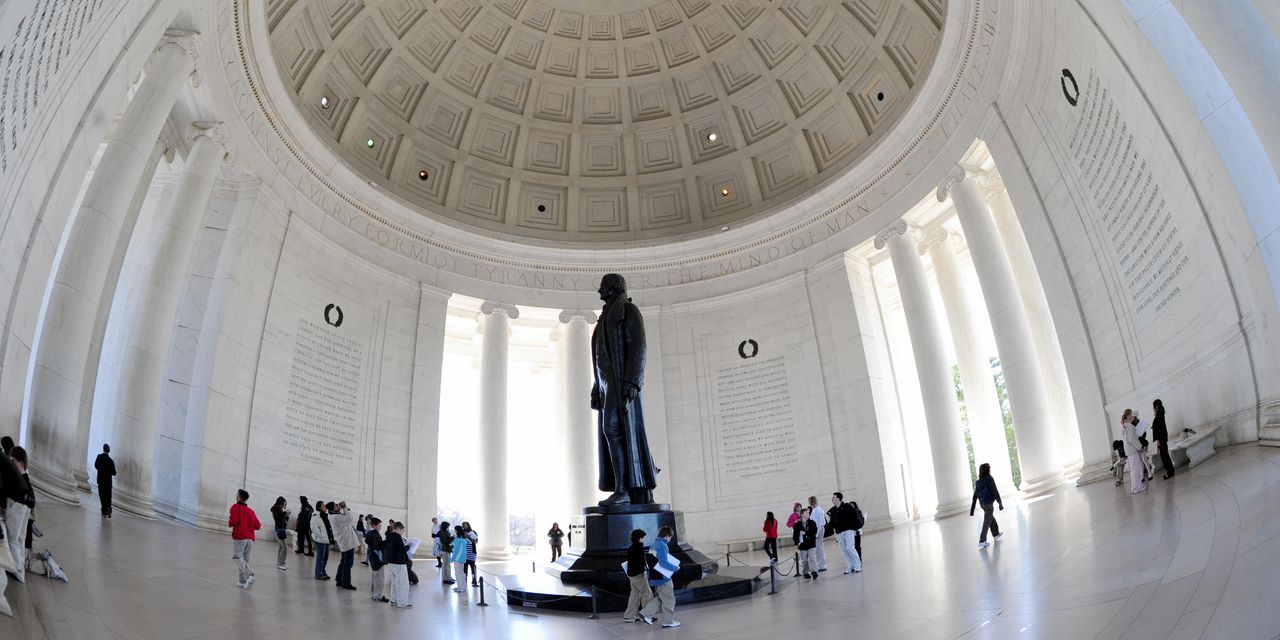 The coming few weeks will be of monumental importance for American democracy. That’s not just because this is the MAGA-election of a lifetime. It’s because, in the background, we’ll be fighting over mega-issues that will shape the course of American governance for far longer than a president will serve.

Whether it’s how the states count the votes or how we decide
the future of Obamacare, the big question is just who gets to decide. In
reaching for the answers, we’re looking to the Supreme Court and for guides from
the nation’s founders.  But the big
puzzle is how a Constitution written 233 years ago ought to map what we do
today.

Thomas Jefferson was one of the country’s most thoughtful founders. He wrote for decades about almost everything, although he wasn’t in Philadelphia to help write the Constitution (he was serving as ambassador to France). For a sharp insight into his thinking, it’s worth a trip to the Jefferson Memorial in Washington.

Two engravings
from Jefferson’s work deserve a careful read today. In the memorial’s
rotunda is a quote from his letter to a Philadelphian who signed the
Declaration of Independence, Benjamin Rush in 1800, where Jefferson wrote, “I
have sworn upon the altar of God eternal hostility against every form of
tyranny over the mind of man.” Basic ideas, Jefferson believed, were
fundamental and inviolable and eternal in the American experience.

But then there’s his 1816 letter to his fellow Virginian,
Samuel Kercheval, which the memorial captures on its southeast portico. “I am
not an advocate for frequent changes in laws and constitutions, but laws and
institutions must go hand in hand with the progress of the human mind,” he
wrote. As people become “more enlightened,” the inscription continues,
“institutions must advance also to keep pace with the times.”

And Jefferson
went on, in a passage that didn’t fit inside the memorial. “Some men look
at Constitutions with sanctimonious reverence, & deem them, like the ark of
the covenant, too sacred to be touched,” he told Kercheval.

Jefferson and the other founders never intended the Constitution to be frozen in stone as a perpetual artifact. James Madison, the Constitution’s principal author, wrote to Jefferson in 1790 that regular changes would prove “a salutary aid to the most rational Government in the most enlightened age.”

They were practical men who wrote the Constitution to solve practical problems, and they expected new problems would require fresh solutions—built on fundamental American values.

“
“Some men look at Constitutions with sanctimonious reverence, & deem them, like the ark of the covenant, too sacred to be touched.”
”

And that sets up the most fundamental issue we face—perhaps
even more fundamental than the question of who is elected president: Especially
for conservatives, on what side of the Jefferson Memorial do they chose to
stand?

On one side, there’s the reverence for “originalism,” which
holds that the Constitution meant what it said at the time it was written, and
that we shouldn’t tinker with it. There was no greater advocate of originalism
than Justice Antonin Scalia, who said
that the Constitution “means today not what current society, much less the
court, thinks it ought to mean, but what it meant when it was adopted.” Justice
Amy Coney Barrett is picking up Scalia’s banner in arguing
that the Constitution’s “meaning doesn’t change over time and it’s not up to me
to update it or infuse my own policy views into it.”

On the other side, there’s the argument that, as we learn
more, we ought to do better. The founders, after all, established racial
inequality in their original decision in writing the Constitution to count
black slaves as 3/5 of a person, and it took an amendment to enshrine freedom
of religion and of speech and a later amendment to establish equal protection
under law. Even Scalia struggled
to reconcile the contradictions captured on the walls of Jefferson’s memorial. Since
then, his critics have argued that Scalia’s embrace of originalism was nothing
less than an effort to politically weaponize
the courts to advance the conservative policy agenda.

That’s spilling over to the
festering debate about who gets to count the votes. It’s a peculiar quirk of
the American system that state officials set the rules on voting for federal
officials. But in recent weeks, cases have been bouncing to the U.S. Supreme
Court about whether states can grant extensions for the vote counting. Justice Brett Kavanaugh was among the majority in a Wisconsin case that ruled that state legislatures, not the courts. make the central decisions on vote counting.
However, he was also on the legal team for the Republicans in 2000, where the
Supreme Court ended Florida’s count and gave the victory to George W. Bush. On
which side does originalism stand?

On Nov. 10, the Supreme Court will hear a case on the constitutionality of Obamacare. The Court ruled in 2012 that the program’s mandate to buy health insurance was a tax but that the tax was constitutional. But then in 2017, the Republican-controlled Congress slashed the tax to zero, effectively ending the mandate.

With the mandate gone but connected to so many other provisions of the Affordable Care Act, Texas Attorney General Ken Paxton argued, the program itself ought to be struck down. The founders never considered whether health care was one of Jefferson’s unalienable rights or whether taxes could be used for purposes other than raising money, so there’s not much “orginalist” guidance for the Court’s health-care debate.

And then there’s the coming battle over President Trump’s Oct. 21 executive order to strip civil service protection from tens (possibly hundreds) of thousands of federal employees. In a stroke, the president is claiming the right to make these employees “at will” so they can be dismissed without cause. It’s a dramatic shift from a system based on merit back to the spoils system of the 19th century. The president claims the right to do this based on the notion of vast executive power—and that the Constitution gives the president the power to fire anyone he wishes.

The president is asserting powers that go beyond the literal
language of the Constitution but which his legal advisers claim the
Constitution gives him. This is about much more than making it easier to fire federal
workers. It’s a battle over a vast expansion of
executive power, at the expense of Congress. Where would Jefferson, Madison,
and the other founders come down on this central debate about the balance of
power between the executive and the Congress?

So this election is not only about who will become president and control the Congress. It’s about the far deeper—and longer reaching—debate about just who governs in America. It’s a basic question: On what side of the Jefferson Memorial will everyone—liberals and conservatives alike—stand?

Now read: The U.S. is heading for a constitutional crisis—even if Biden wins

Donald F. Kettl is the Sid Richardson Professor at the LBJ School of Public Affairs, University or Texas at Austin. He’s the author of “The Divided States of America: Why Federalism Doesn’t Work“.