Home > Business > This film shows off virtual reality’s growing potential to compete with movies, TV, and gaming as our dominant form of entertainment

This film shows off virtual reality’s growing potential to compete with movies, TV, and gaming as our dominant form of entertainment 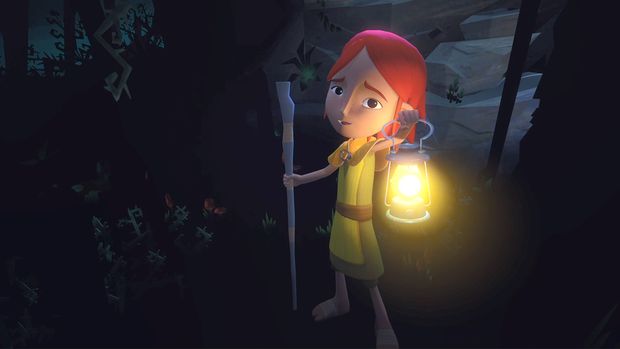 Virtual reality made me want to get into bed with Glenn Close.

Well, I had to do something. She laid there right in front of me, dying. I stepped to the edge of the bed and reached out, wanting to comfort. My sister Daisy Ridley and I exchanged a knowing glance across the bed, and then averted our eyes. Then we looked back at Close, our mother, the chief of our village, who’d been cursed by the witch Baba Yaga.

This affecting scene was not in a videogame or a movie, but in a virtual reality short film released Thursday on Facebook’s
FB,

Based on a Russian fairy tale and starring Close, Ridley, Kate Winslet and Jennifer Hudson, Baba Yaga was created by Baobab studios, one of a handful of production companies creating animated stories for VR.

Director Eric Darnell, an animation veteran behind hits like Antz and Madagascar, says even after five years of creating stories in VR, they’re still essentially inventing a new narrative medium on the fly, the rules and grammar of which are still being figured out.

“There’s an awful lot we obviously still need to learn,” Darnell told MarketWatch. “We’re at the stage when cinema was basically shooting stage plays. At first I thought it was just like making movies in 3-D, but it was humbling to realize I couldn’t just go back to what I know about cinema — this is something completely different.”

VR remains a niche market, a transformative technology that for years has seemed perpetually about to emerge from its cocoon. But 2021 does feel like yet another inflection point. Maybe it’s because VR technology has become so much better at precisely a time actual reality has turned so much worse. The two are meeting in the middle, with millions more donning headsets.

Facebook won’t say how many Oculus Quests it has sold, but in a January 6 blog post, Andrew Bosworth, head of Facebook Reality Labs, wrote, “Quest 2 surpassed the original Quest’s monthly active people in less than 7 weeks.”

So can VR storytelling and gaming replace movies, TV and game consoles as a dominant form of entertainment?

“Why can’t they all exist together?” Jennifer Hudson told MarketWatch. “I like options. Sometimes you watch things a traditional way, and sometimes you want to be seen. What better way to be seen than by becoming the character in VR.”

The technology is also appealing to audience-deprived artists, Hudson added. “The challenge of being a performer today is we are so disconnected and you want to feel energy and to feel you are more present, a part of it and reaching someone. VR space allows for that.”

To Hudson’s point, due to Covid, the premiere party for Baba Yaga was held in VR. I walked the red carpet from home, took photos and mingled. It was weird, socially awkward, and yet exhilarating to be back in a public space talking to strangers.

Right now the main challenge to VR storytelling is economics. Darnell told me that Baobab, a startup, is able to keep production costs essentially no more expensive for a virtual reality film than a traditional one, but due to the overall smaller potential audience at present “it is far less profitable.”

That potential audience has grown considerably with new hardware such as the Oculus Quest 2, but the devices tend to appeal primarily to gamers. Companies like Baobab are betting that content with broader appeal will translate into broader audiences for the medium.

The industry is not there yet. Not enough people have a headset today, and not enough that do seem willing, at least at this stage, to fork over six bucks  for a 20 minute film.

This comes back to what Darnell said about inventing new ways of telling stories. There’s a wonderful moment in Baba Yaga when you follow your sister Magda into the dark forest on a quest to save your ailing mother. Magda hands you her lantern. It’s subtle, but suddenly you can illuminate individual plants. It doesn’t change the narrative, but it deepens your immersion.

“The interactivity doesn’t have to be this profound moment — do you save the kitten or do you let it die?” Darnell said. “I have a lantern, I can follow the story and light up things around me. Little moments of delight. And it doesn’t have to be about killing zombies or Nazis. It’s just about the magic of being able to exist and suspend disbelief and be in this magical world with these characters that you fall in love with.”

The best storytelling helps us close the social distance between ourselves and the hearts and minds of others. It generates empathy and joy. Virtual reality has the potential to deepen this experience, Darnell says.

“Empathy is step one, but the next step is compassion, where you actually take action based on the empathy you are feeling,” he said. “That is the big difference with VR, you can go to the point of compassion.”

I felt a glimmer of that walking up to Glenn Close on her deathbed, actually reaching out with my hand with compassion. Studios like Baobab are far from cracking the code, but experiencing VR films like Baba Yaga will make you yearn for what’s to come.

Opinion: Bond investors will have a stormy 202...