Home > Technology > The UK economy is on the brink of a double-dip recession after it shrank 2.6% in November amid surging COVID-19 cases

The UK economy is on the brink of a double-dip recession after it shrank 2.6% in November amid surging COVID-19 cases 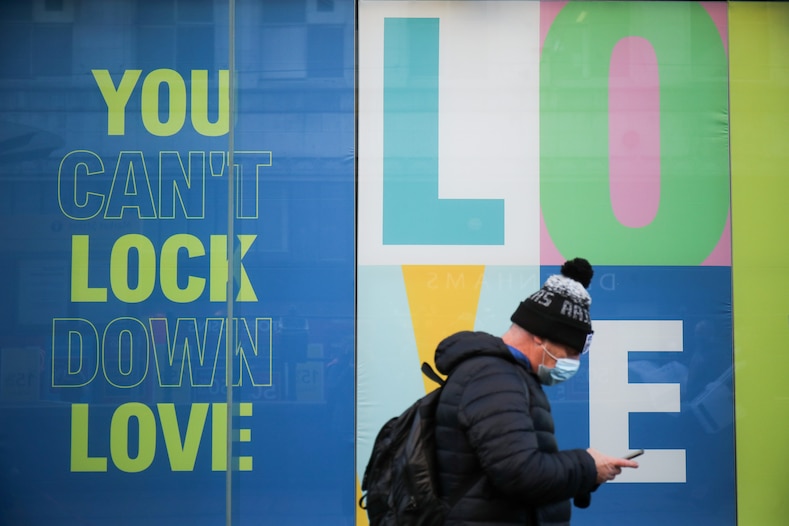 The UK economy shrank 2.6% in November as an increase in coronavirus infections and fresh restrictions exacted a heavy toll, official figures have shown, putting the country on track for a double-dip recession.

November’s drop was considerably lower than the 5.7% contraction economists predicted in a Reuters poll. But it meant the economy was 8.5% smaller than it was in February 2020, having been 6.1% smaller in October, the Office for National Statistics said.

Since November the UK government has tightened lockdown measures, meaning more pain is yet to come for the economy.

Ministers are focused on rolling out coronavirus vaccines, however, which they hope will allow growth to start bouncing back in the spring.

The 2.6% contraction in November, when England was placed into a month-long lockdown, followed an expansion of just 0.6% in October.

It puts the UK on track for a double-dip recession – with the economy set to fall into a sustained period of contraction after returning to growth in the third quarter of 2020.

Coronavirus cases have soared in recent weeks, thanks in part to a new, more infectious variant. More than 370,000 people tested positive in the last seven days while more than 7,500 people died, up 50% from the previous week.

Commenting on the economic figures, chancellor Rishi Sunak said: “It’s clear things will get harder before they get better and today’s figures highlight the scale of the challenge we face.

“But there are reasons to be hopeful. Our vaccine roll-out is well underway and through our plan for jobs we’re creating new opportunities for those most in need,” the finance minister said.

The UK economy shrank at a record pace of roughly 20% in the second quarter of the year, before growing by around 16% in the following three months.

But many economists now predict gross domestic product shrank in the final quarter of 2020, and many say it is set to contract further in the first three months of 2021.

Many analysts highlighted that November’s fall in GDP was not as bad as expected. Alpesh Paleja, lead economist at the UK’s Confederation of British Industry, said the impact of the looser restrictions in November was “was significantly smaller than the downturn seen in the spring”.

“Steps taken by businesses earlier in the year to COVID-proof their operations – combined with the time-limited nature of the restrictions, and schools remaining open – meant more companies were able to continue trading safely.”

However, Goldman Sachs predicted last week that the new country-wide lockdown put in place earlier this month would cause the UK economy to shrink 1.5% in the first quarter of 2021.

Read more: A former journalist who worked his way up to become one of Wall Street’s best tiny-company stock pickers tells us the 4 pillars of the approach that’s beating 98% of his competitors

“We estimate that the economy will be around 11% below its pre-COVID level by the end of Q1,” Goldman Sachs said.

“The fundamental reason is that UK activity is more reliant on covid-sensitive consumer spending than any of the other large advanced economies.”

The Bank of England increased its bond-buying programme by £150 billion ($205 billion) in November in a bid to ease conditions in the economy amid fresh lockdowns.

On Tuesday, BoE governor Andrew Bailey said Britain was facing a “very difficult period”. Yet he said that “the darkest hour is the one before the dawn”.

Bailey on Tuesday said there were “lots of issues” with cutting interest rates into negative territory from the current record-low level of 0.1%. His comments helped the pound.

How to ask your boss for the raise you genuine...

Which non-dairy milk is the healthiest, accord...