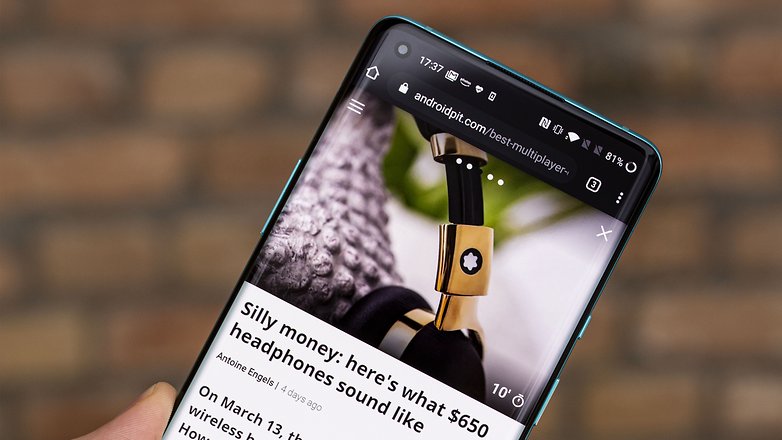 It’s April and therefore time for OnePlus to present its latest smartphones. While the new OnePlus 8 looks more like a shrunken OnePlus 7T Pro with the latest hardware, OnePlus puts everything a smartphone fan can expect from a flagship product into the 8 Pro. In our first hands-on with the OnePlus 8 Pro, we show you that the manufacturer has added key features that were missing in the past.

When you hold the OnePlus 8 Pro in your hand for the first time, you think you are holding a
OnePlus 7T Pro. But OnePlus has changed a lot about the appearance of the OnePlus 8 Pro compared to its predecessor.
Some of it with a clear advantage in things you don’t first have in mind. First of all, the front camera should be mentioned here, OnePlus now gives the 8 Pro a hole punch in the display for the selfie camera. On the OnePlus 7T Pro, the camera was still hidden in a pop-up mechanism that activated when needed. This looked cool, but had the side effect that Face Unlock, for example, was not as snappy as expected from OnePlus. The elimination of this pop-up camera also means that the OnePlus 8 Pro can now officially claim IP68 certification.

On the back, there is a change in design due to the new camera module. The main camera is still in the middle, but the flash, laser autofocus, and the 3x telephoto camera have moved to the left of the main camera unit. The module protrudes unusually far to the outside. One could almost think that OnePlus might have borrowed the camera setup from its sister company OPPO and its Find X2 Pro.

Apart from that, on the OnePlus 8 Pro, which we had in the nice matte Glacial Green color variant, everything is in the usual place. Volume buttons on the left, on/off switch on the right along with the classic notification slider.

The OnePlus 8 Pro display is of course one of the highlights of the smartphone. The 6.78-inch Fluid AMOLED panel in a 19.8:9 format has a resolution of 3,168 x 1,440 pixels (QHD+). This results in a pixel density of 513 ppi.
Sounds like the panel of the OnePlus 7T Pro, doesn’t it? Not quite, because the OnePlus 8 Pro’s new panel achieves a maximum refresh rate of 120 Hz instead of 90 Hz. I can still rave about how smooth the display is when scrolling through my Twitter timeline, for example, but in the end, you have to experience it yourself.

There are no big surprises with the software. Of course, Oxygen OS 10 is still based on Android 10. Oxygen OS is still one of the best UI vendors and, in my opinion, even better than the stock Android that Google ships on its Pixel smartphones. OnePlus has done more fine-tuning to the software for the OnePlus 8 and the OnePlus 8 Pro tested here. The Dark Theme 2.0 should now support more apps, the icons have been refined and dynamic wallpapers have been added.

At the time of publication, Oxygen OS 10.5.2 is running on our test device, but there will certainly be one or two updates before the full retail release.

It is as it is, OnePlus will continue to deliver one of the fastest combinations of hardware and software in terms of performance in 2020 with the OnePlus 8 Pro.
In our benchmark tests, the OnePlus 8 Pro is convincing throughout, but for our final test, we still have to compare the OnePlus 8 Pro’s values with its direct rivals, the Samsung Galaxy S20 and the Huawei P40 Pro.

But from the comparison table, it also becomes clear that those who own a OnePlus 7T or 7T Pro definitely do not need to upgrade to a OnePlus 8 or 8 Pro in terms of performance.

OnePlus has made a lot of progress in its camera equipment for the 8 Pro and provides its top smartphone with a quad-camera at the back. Especially the combination of 48-megapixel wide-angle and 48-megapixel ultra-wide-angle sensor sounds very exciting. But first the complete equipment of the OnePlus 8 Pro at a glance:

Cameras in the OnePlus 8 Pro

Since we have not yet been able to fully test the camera, also due to the current circumstances, we will deliver the results in our final review.

OnePlus has given the 8 Pro a lot in terms of battery power. On the one hand, the capacity increases to 4,510 mAh. While the charging technology via cable is still Warp Charge 30T with 30 watts, the long-awaited wireless Warp Charge is now included. OnePlus christens its wireless charging technology Warp Charge 30 Wireless and also offers a corresponding charging station.
With this charging station, the OnePlus 8 Pro is charged to half its capacity within 30 minutes.

In terms of battery life, the OnePlus 8 Pro ran through our benchmark program and could hold out for 9 hours and 35 minutes in its full resolution at 120 Hz, while a full 12 hours and 32 minutes could be achieved with FullHD+ at 60 Hz. So far, the OnePlus 8 Pro has performed very well in current everyday life and easily manages more than a day on one battery charge. But one must also say that I am currently on the road very little and therefore the smartphone is not really challenged with normal everyday conditions.

OnePlus delivers its masterpiece with the 8 Pro. It’s as fast as an arrow thanks to the combination of hardware and Oxygen OS 10. The display flies through long scrollable contents with at 120 frames per second and spoils the eyes with an absolutely smooth display even for games. At the same time, OnePlus gives the 8 Pro features that have long been demanded by fans and industry critics: IP68 certification and fast wireless charging.

Other 5G smartphones we have reviewed or are still testing:

MotoGP live stream: How to watch the Czech Rep...