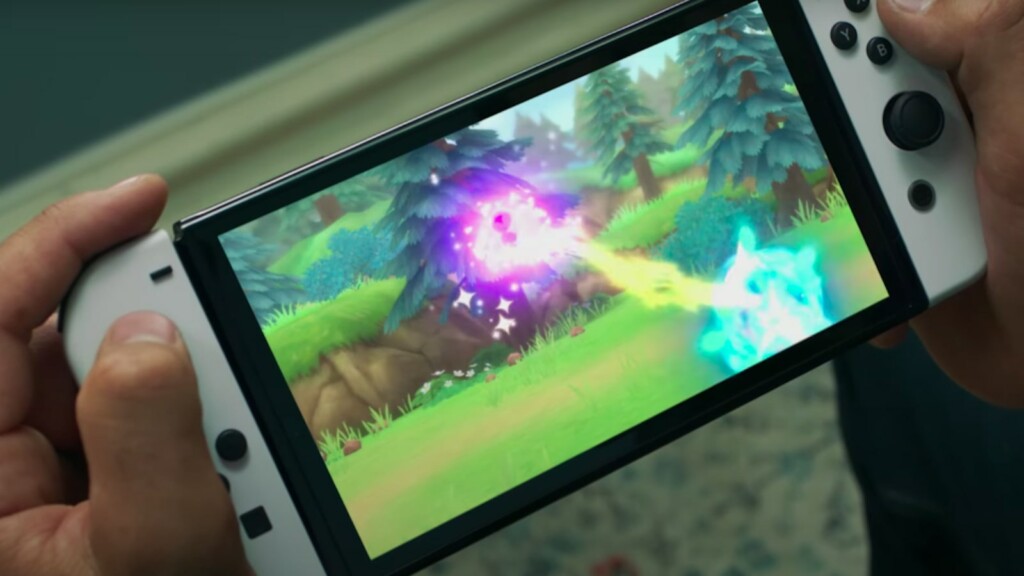 The Nintendo Switch OLED has arrived, but is it worth upgrading to? Find out if you should make the switch as we dive into the latest features and improvements of Nintendo’s superfluously popular gaming device.

Nintendo fans have a new device to consider buying. However, suppose you’re new to Nintendo. In that case, you may be wondering what the excitement over the Nintendo Switch OLED is all about.

What is the Nintendo Switch?

Many companies bring an enjoyable console experience to video games. However, one is widely considered synonymous with gaming, and that’s Nintendo. For 38 years, Nintendo has brought innovation and exciting new ideas to gamers worldwide. They corner the family-friendly content market and have dominated handheld gameplay longer than any other.

The Switch, released by Nintendo in 2017, is a video game console that hybridizes at-home and mobile gameplay using clever hardware design. While the device itself includes its own screen, it can be connected to a full-size TV to use as the primary display. Need to leave the room? With the Switch, you can game on the go. All you need to do is attach the controller to the sides of the console and use its built-in screen to continue gaming.

The original Nintendo Switch console comes with a 6.2-inch LCD touch-screen display. For the new Switch OLED, Nintendo replaces the screen with a larger 7-inch OLED touch-screen. Unlike backlit LCDs, OLED screens can illuminate pixels individually, contributing to technical and visual improvements. They’re capable of delivering richer black levels, improved color accuracy, and better viewing angles. Despite being limited to the previous model’s 720p and 1080p resolutions, this is undoubtedly a welcome upgrade from the Switch’s original screen.

Additionally, while the display is larger, the overall size of the device is roughly the same. So, you won’t notice any noteworthy change in weight. It’s a shift from approximately 0.88 lbs to 0.93. An obvious concern that comes to mind is the effect a larger screen might have on the battery. However, according to the official website, the battery life remains the same as the previous model. You’ll be able to play just as long as before.

One of the more common complaints about the original Nintendo Switch is the kickstand located on the back of the device. The support it provides is unreliable at best, making it frustratingly less effective than one might expect. On the latest version, this experience is vastly improved. The Switch OLED has a redesigned wide adjustable kickstand, and this time, it’s much sturdier than before.

The Nintendo Switch OLED now features a LAN port built into the dock. While playing in TV mode, you can attach a LAN cable for a more stable internet connection. This is fantastic for downloads and multiplayer gaming because we all know how grating inconsistent WiFi can be. Wireless technology has come a long way, but sometimes you just can’t beat a good ol’ hard-wired link.

Internal storage doubles to 64 GB on the Switch OLED

The latest Switch OLED has moved up from 32 GB of storage to 64 GB. That’s double the original storage capacity of the original model. With extra internal storage, you can save more games to the device on the fly gaming. Meaning, the excruciating choice of which games to keep downloaded is something you’ll be able to do a little less often. Yes, please.

Nintendo has made enhancements to the Switch’s audio as well. The console’s stereo speakers support 5.1 linear PCM audio and can be connected to a TV via HDMI. Unfortunately, not much else has changed in regards to the audio experience. Listening through headphones, for example, is essentially the same.

Is the Nintendo Switch OLED worth it?

So the question remains: Is the Nintendo Switch OLED worth it? If you’re a fan of Nintendo and handheld gaming, the answer just might be yes. The Switch series offers a unique gaming experience that you won’t find on other consoles. Its focus on relaxed, casual gameplay and its versatile portability is an asset for gamers who like to access games both in and out of their homes.

So, whether you’re new to the Switch or upgrading, you likely won’t be disappointed either way. The Nintendo Switch OLED prices in at $349.99 and is available from most retailers. You can also buy it from the official Nintendo website by clicking here.

Mark is a writer and podcaster with love for technology. When not writing for Gadget Flow, he enjoys passionately working on storytelling projects and exploring the outdoors.