The Galaxy S22 Ultra may land the Note’s S Pen silo and 6.9″ display 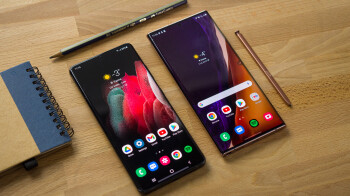 Just when we thought the Galaxy S22 Ultra couldn’t get more interesting, what with the Note line succession through a boxier shape, now comes the real hint of Galaxy Note inspiration, a rumor that it will also have an S Pen silo.

Yes, the same Ice Universe that tipped that the Galaxy S22 Ultra will adopt the blockier design of the deprecated Galaxy Note line, now claims that it will also carry an S Pen stylus inside, not as a tack-on in a case like on the S21 Ultra.

The Note 22 is dead, long live the S22 Ultra and its mighty S Pen sword!

Here’s the scoop: “A supply chain guy from Kuan said that the Note is gone, but the S22 [Ultra] has become a Note with a built-in S Pen. The appearance is the same as the Note20 U style.“

The purported move from the current 20:9 aspect ratio of the S21 models, to the reported 19.3:9 on the S22 series will result in a shorter but less narrow handsets, leaving ample room for an S Pen silo on the side of the S22 Ultra.

This will be valid even more for the S22 Ultra whose exact screen size hasn’t leaked yet so we may be wrongly assuming that it will retain the same 6.8″ diagonal. Even in that case, though, that will result in more canvas to draw with the S Pen on than what we now have on the S21 Ultra.

What if the S22 Ultra takes advantage of Samsung’s newfangled Border Reduction Structure technology that would shrink the bezels even further and make them uniform on all four sides. This would allow Samsung to place an even larger panel on the S22 Ultra, making it a true flagship king, with a bigger area to use the S Pen on than what’s on the Note 20 Ultra, or even the S21 Ultra.
In fact, we noticed one very interesting chart subtitle in the latest “Future of OLED Manufacturing” display industry quarterly report by the renowned analysts from DSCC. As you can see, it mentions the 6.9″ Galaxy Note display to be the “highest-spec non-foldable panel in the Galaxy series” hence this screen may be applied to the S22 Ultra, too.

Notice the 3088×1440 pixels of resolution writeup on the chart? Yeah, that’s exactly the new 19.3:9 aspect ratio that is rumored to engulf the Galaxy S22 series in its wider-bodied hug, including the Ultra model with the S Pen.

Could then Samsung be preparing a real Note 20 Ultra successor, just nestled within the S22 family and called the Galaxy S22 Ultra? If these latest rumors that the S22 Ultra will have an S Pen stylus silo, blockier shape, and a 19.3:9 display aspect ratio just like the Note 20 Ultra pan out, that scenario looks increasingly plausible.

We know at least a few people that would be happy to buy it, if the Galaxy S22 Ultra comes with these specs:

What do you think, could such a Galaxy S22 Ultra pique your interest enough to prefer it before the bendy Z Fold 3 specs that include stylus support, too, but a larger main display, given the expected price difference between the two in favor of the S22 Ultra?