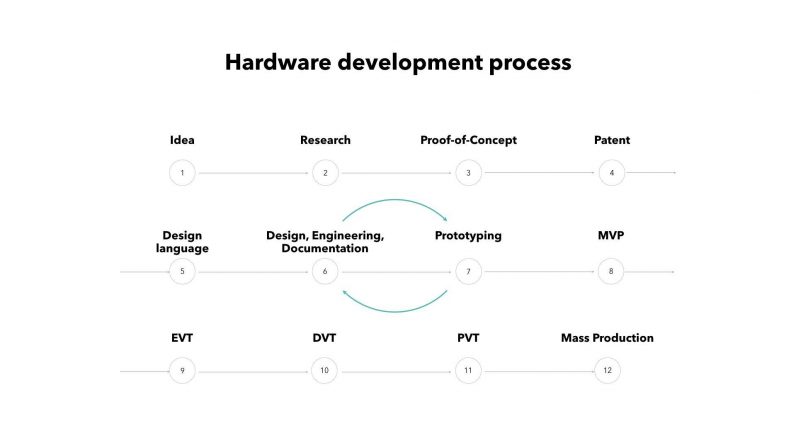 Here’s a sad statistic in tech — 97% of hardware startups fail within the first 20 months after attracting their first investments. Hardware is… hard, but it’s also what makes these projects interesting. In this article, I’ll give you an insight into how my team and I developed a smart speaker and other gadgets as an example of how to create a hardware product.

I’ll go into how we developed these products to describe what stages of development a device goes through before it reaches store shelves. Hopefully it can help you on your own hardware journey!

Let’s start with the basics. Here’s a typical product development cycle (such as for a smart speaker or a smart screen) from idea to launch. I’ll focus on stages 1-4, the fundamentals.

It all starts, of course, with an idea. Everyone has a lot of ideas, but most are discarded at the feasibility study or proof-of-concept stages. These steps should never be neglected. Otherwise, at later stages of the project, it may turn out that the product is not technically feasible, or the cost of the final device is so high that it reduces the commercial success of the device to zero.

The most important part of a product’s research is the feasibility study of the product.

You can start by analyzing existing platforms and solutions. This can be done by examining the teardowns of several popular devices from the target category, and making a list of the main components and their suppliers. Datasheets on these components will provide a complete picture of how the components comply with the specification that you plan to implement.

A few words about MVPr (minimum viable prototype), which should not be confused with MVP (minimum viable product). MVPr is an early working prototype with minimal functionality, which is created primarily to confirm the validity of the idea and test a number of product hypotheses.

MVPr is usually assembled from commercially available modules or HDK (hardware developer kits) to minimize development time. 3-4 years ago, developers would have had to work hard to create the MVPr of a smart speaker.

Now, smart speaker HDK are available both from small companies (usually quite affordable, costing up to $100), and from leading market companies such as Qualcomm, Amazon, or Google (such HDKs are often more expensive — from a few hundred to several thousand dollars). Often, access to the SDK, developer documentation, test firmware, and sample applications is bundled with the HDK.

The choice of HDK depends on several factors, such as:

The marketing study allows you to look at the new idea through the eyes of the user and answer a number of important questions:

Another important initial step is a competitive analysis. No matter how fresh and unique your idea may seem, it is quite possible that something similar has already been invented before. Try to find at least a few competitors and analyze their strengths and weaknesses, technical specifications, and pricing policy.

The technical aspect of a competitive analysis is also very important. The easiest way to understand the approximate cost of your future device and highlight the main components that you have to use is to disassemble a competing device by COGS (cost of goods sold). This may have already been done for you because tear-down and disassembly reviews of popular devices can often be found on the internet.

In the initial stages, both traditional SWOT analysis and less commonly used Porter’s Five Forces model will be useful.

And now, let’s see what happens to those ideas that are turned into products.

I recommend everyone to think about patents as a priority.

Do not neglect a patent search. It is not necessary to immediately resort to using expensive patent offices for patent searches. A preliminary search can be done independently and for free. Below is a list of the main open patent databases by region.

Conducting a preliminary independent patent search is useful, not only to make sure that your invention is unique and does not infringe on someone else’s copyright, but also to see a slice of the industry and understand what is being done or was being done in this area in order to compare your developments with competitors.

For a more thorough search, you can contact patent attorneys to not only check issued patents in open registries, but also patent applications.

Hopefully this article has helped you understand a bit better the importance of feasibility studies and patent research when it comes to making your hardware startup a success.

The No. 1 thing Americans are spending their s...

Gucci and the Future of Fashion Shows and Gend...