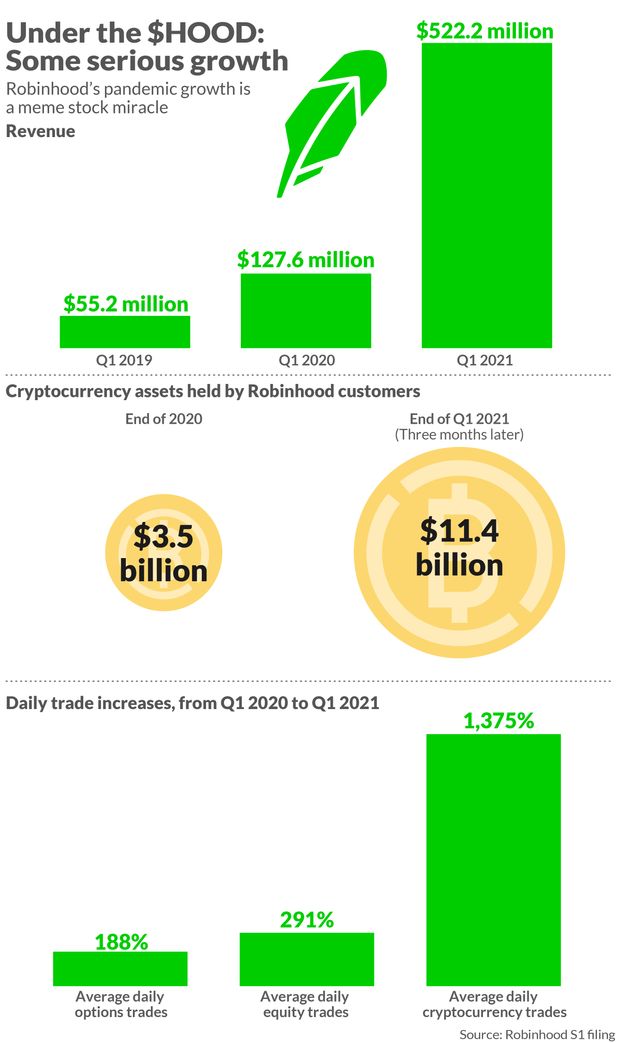 Wall Street is finally getting a peek under the hood of Robinhood ahead of the most anticipated public debut since WeWork, and while the no-fee trading app’s offering prospectus is not as much of a shock as the co-working unicorn’s was, there were more than a few surprises in Robinhood’s Thursday-afternoon filing.

Like most big, contemporary IPOs, it’s being underwritten by all the big banks –Morgan Stanley excluded, in this case — and the numbers are even bigger, profits are theoretical for now, and the company’s founders will retain a massive amount of control, thanks to the proposed structuring of share offerings.

But the $12 billion company that wants to “Democratize finance for all” did have some big items worthy of discussion. Here are five disclosures that really gave our eyeballs a workout:

The word “growth” is mentioned 217 times in Robinhood’s S-1 filing, which makes sense considering that it had almost 18 million users at the end of March, a 107% year-over-year increase, which was mirrored by its ballooning revenue, which grew more than 311% over the same time period.

Take a look at some of that growth:

More on the crypto surge later, but for now just revel in the breadth of what appears to be Robinhood’s monetization of the retail trading boom that was sparked by hundreds of millions of people trapped inside during a once-in-a-century global pandemic as the stock market made an unprecedented, parabolic recovery between March 2020 and March 2021.

And also take into account that what we’re looking at includes the January short squeeze on stocks like GameStop
GME,

that saw retail investors become a key player, using apps like Robinhood, and cementing what we now know as the “meme stock” boom into the public consciousness.

But Robinhood’s filing is unequivocal in its pitch that the best is yet to come and that even more growth can be found in a world where people are finally leaving their houses after 16 months of terrified boredom and the froth around retail trading is already subsiding.

Expansion into Asia and Europe are explicit parts of this plan, as is the belief that more widespread adoption of individual investing is an organic next step in personal finance. But it has to be mentioned that some of Robinhood’s diehard retail investors abandoned the platform after it had to halt trading on some meme stocks at the height of January’s squeeze.

While that episode made Robinhood a household name, it also made the company’s co-founder, Vlad Tenev, a witness in a congressional hearing and gave a clear sense to many retail traders that the app was not for them. The company is setting aside 20%-35% of its shares for retail investors to buy, but it might not be an easy sell in the current climate.

On Reddit forum WallStreetBets, one discussion of Thursday’s offering prompted users to discuss how they can short Robinhood’s IPO, with many still angry about January.

And speaking of anger…

A lot of people are suing Robinhood. Like, a lot

One doesn’t usually see six pages of pending lawsuit disclosures in an IPO offering, but that’s the case with Robinhood.

In addition to disclosing on Wednesday that it will pay out almost $70 million to settle claims by the Financial Industry Regulation Authority that it distributed false and misleading information to its customers, failed due diligence on its approval of options accounts for novice traders and did not provide complete market data to users, Robinhood also admitted Thursday that its lawyers are very busy.

More than 50 class-action lawsuits have been filed against the company regarding January’s trading restrictions, with three individual actions also on the books for good measure. There are also apparently some issues with the Securities and Exchange Commission’s Antitrust Division and the Northern California U.S. Attorney’s Office, which have subpoenaed the company and executed a warrant on Tenev’s cell phone.

Then there are allegation from Massachusetts’ state regulator that the company has broken three state securities laws; New York’s regulator poking into possible money laundering and cybersecurity infractions; 2,000 users in a class-action suit who say their accounts were hacked; 15 class actions about server outages in March 2020 that made national headlines and froze users out of their trading accounts during a market crash; six class actions by users who claim that Robinhood’s controversial “payment-for-order flow” model cheats them out of best execution on their trades; a Finra probe into the same issue; and disclosure of a settlement in a civil suit over the suicide of 20-year-old Robinhood user Alex Kearns, who killed himself after seeing an unsettled options trade on his account had him at a loss of more than $700,000.

But that’s mostly it for Robinhood’s legal troubles headed into the IPO…well, other than a few SEC things and some other lawsuits.

Robinhood’s future is all about not repeating its past

One major takeaway for anyone reading the offering document is that Robinhood is learning a lesson from all that legal mishegas, so “safety,” “oversight” and “education” are the sexy new keywords at a company once known for tossing virtual confetti every time a user made a trade on their phone.

And while the company still makes 81% of its revenue from payment-for-order flow, it clearly wants to give a narrative of evolution to prospective investors. From the S-1:

At Robinhood, our values are in service of our customers. The following values describe the company that we aspire to become.

•Participation Is Power. At Robinhood, the rich don’t get a better deal.

•Radical Customer Focus. We exist to make our customers happy.

After spending the past year fending off criticism of its business model, shoring up its tech in the face of huge user growth, moving to better inform and support customers who appeared to be in over their heads, and paying fines to multiple regulators, Robinhood is not being shy about wanting people to know that it’s learned its lesson about playing it safe, or at least safer.

Well, outside of one key thing…

According to Robinhood’s filing, trading of dogecoin
DOGEUSD,

accounted for 34% of the company’s entire cryptocurrency transaction revenue in the first quarter of 2021, a rather sizable jump from the 4% it accounted for in 2020’s fourth quarter.

Taking into account that Robinhood also disclosed that it’s holding almost $12 billion of crypto on its books, it looks like the company could be sitting on almost $4 billion of doge, about 7% of all the coins currently in circulation.

But while some would point to the volatility of a cryptocurrency created as a joke about a dog meme, we prefer to mention that this huge holding makes Elon Musk’s doge tweets almost irrelevant, because why listen to a guy who makes electric cars and space rockets when Robinhood might just be, as MarketWatch’s Mark DeCambre expertly speculates, the dogecoin whale that was promised?

The average Robinhood user was born in the ’90s

So the people that this company is relying on for the kind of financial avarice that will power a multi-billion trading platform were born after “Dallas” went off the air?