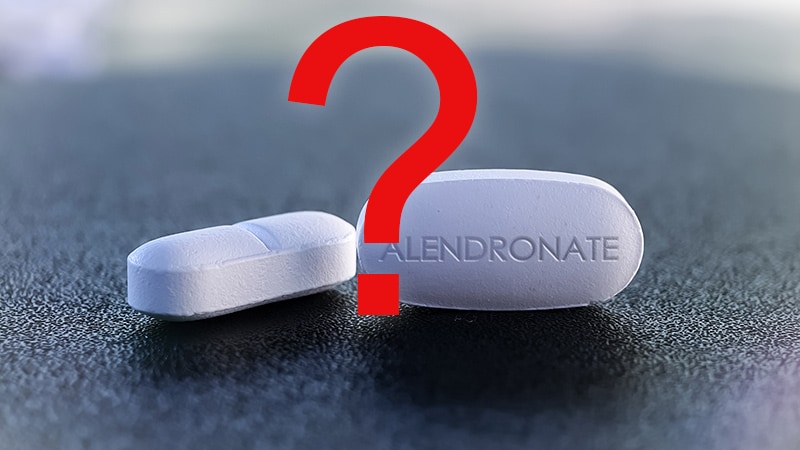 Women treated with oral bisphosphonate drugs for osteoporosis for 5 years get no additional benefit ― in terms of hip fracture risk ― if the treatment is extended for another 5 years, new research shows.

“We found that hip fracture risk in women did not differ if women stopped bisphosphonate use after 5 years or stayed on the medication for 10 years,” coauthor Joan C. Lo, MD, Kaiser Permanente Northern California, Oakland, California, told Medscape Medical News.

The new study, published this month in JAMA Network Open, did show a small benefit in continuing the treatment through 7 years vs 5 years, but it wasn’t clear if this was significant.

“Whether there is a benefit to staying on the drug for 7 years needs to be further studied in randomized trials,” Lo stressed.

It is well established that oral bisphosphonates are effective in reducing the risk for fracture within the first 3 to 5 years of treatment; however, evidence on the effects of treatment beyond 5 years is lacking.

The most recent guidance from the American Society of Bone and Mineral Research (ASBMR) on the issue, which were released in 2015, recommends continuation of bisphosphonates beyond 5 years for high-risk patients, but it recommends a “drug holiday” for low-risk patients.

However, that guidance acknowledges that data are limited regarding long-term use. This large new study adds important new evidence to the discussion, Robert A. Adler, MD, who was a member of the ASBMR Task Force for the recent guidance, told Medscape Medical News.

“[With the lack of recent research,] this new study from Kaiser Permanente is of great interest,” said Adler, who is chief of endocrinology and metabolism at Central Virginia Veterans Affairs Health Care System and a professor of internal medicine and of epidemiology at Virginia Commonwealth University, Richmond, Virginia.

“It is new data and suggests we might temper our enthusiasm for long-term treatment with bisphosphonates,” he said.

“Importantly, it is the first large observational trial and is closer to a real-world setting than a randomized controlled trial,” he said.

But, Adler emphasized: “The take-home message is that while this suggests that patients can probably be given a drug holiday for a couple of years,…they should be retested, and if they appear to be at an increased risk of fracture, they probably should restart again.

“Osteoporosis is a chronic disorder,” he emphasized. “It isn’t cured by any of our treatments, and as people get older, they are at a higher fracture risk.

“So we really need to follow our patients for a lifetime and reassess their fracture risk every couple of years ― whether they are still on therapy or on a drug holiday.”

The new study involved data from Kaiser Permanente Northern and Southern California on 29,685 women who had completed 5 years of treatment with oral bisphosphonates, including alendronate, risedronate, or ibandronate, between 2002 and 2014.

Their median age was 71. Among those for whom bone mineral density data were available, 37% had osteoporosis after the first 5 years of treatment.

During these 5 years of treatment, 507 hip fractures occurred.

The cumulative incidence of hip fracture among for those who discontinued study therapy at entry, ie, those who underwent treatment for 5 years, was 23.0 per 1000 individuals.

The rate in the 7-year treatment group was based on patients taking a 6-month drug holiday after the initial 5 years, but the results are hard to interpret, Lo said.

“It’s possible that 7 years is better than 5, but this is not a randomized trial, and some of the data analyses done in the study suggest more research should be done to look at a benefit after 7 years.

“At the end of the day, doctors and women need to decide at 5 years what an individual woman’s risk fracture risk is and determine if she should stay on the drug longer,” Lo emphasized.

The uncertainty of any benefit of treatment with bisphosphonates beyond 5 years is further reflected in US recommendations ― the US Food and Drug Administration has concluded on the basis of pooled data from the extension phase of major clinical trials that any advantages of treatment beyond 3 to 5 years are unclear.

Key limitations of the current study include the fact that the incidence of hip fracture was not evaluated in low-risk vs high-risk subgroups; therefore, “these findings may not be applicable to older women at higher risk of osteoporotic fracture,” the authors write.

Furthermore, the study did not assess outcomes of fractures other than hip fractures, such as vertebral fractures, they note.

Adler points out that another limitation is that adherence in the trial was defined as taking 60% of prescribed pills.

“I think this is the biggest weakness with the study,” he said. “Particularly with medications like oral bisphosphonates that don’t really make patients feel any different, it’s a real challenge to make sure patients continue to take these drugs properly.”

The findings should give some reassurance for patients who take a break from the drugs after 5 years. However, reassessment of their risk is critical, Adler reiterated.