TAVR Surpasses SAVR in US, Outcomes Continue to Improve 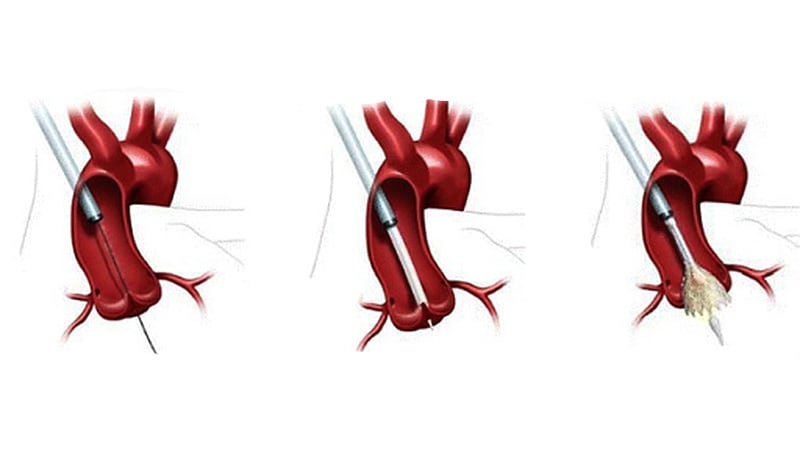 Annual TAVR volume first exceeded isolated SAVR volume in 2016, but in 2019, it exceeded all forms of SAVR (72,991 vs 57,626), according to data submitted to the American College of Cardiology–Society of Thoracic Surgeons Transcatheter Valve Therapy Registry (ACC-STS TVT) and the STS Adult Cardiac Surgery Database.

“This is a trend we’ve seen coming for about 5 years, but it’s still a little mind-boggling to see how quickly the numbers are diverging,” said first author John D. Carroll, MD, from the University of Colorado School of Medicine, Aurora, Colorado.

Also amazing, he said, is the total number of aortic valve procedures performed in the past 8 years: from 2011 to 2019, almost 800,000 individuals underwent some form of aortic valve replacement in the United States.

The study by Carroll and colleagues was published simultaneously in the Journal of the American College of Cardiology and The Annals of Thoracic Surgery.

This is a trend we’ve seen coming for about 5 years, but it’s still a little mind-boggling to see how quickly the numbers are diverging.
Dr John Carroll

The 2019 data are from hospitals located in 49 states, as well as two sites in the District of Columbia and two sites in Puerto Rico. In August 2020, there were 715 US TAVR sites. With the opening of a site in Wyoming in March 2020, TAVR programs now exist in all 50 states.

The only US TAVR sites not included in the STS/ACC TVT Registry are those in military hospitals and the Veterans Affairs (VA) medical system. As of mid-2019, there were eight VA TAVR programs, according to the article.

At 20-plus pages — including a table that runs more than 6 pages — and an additional 27 pages of supplemental data, the report offers something for everyone, including details on TAVR use in underserved minorities, a wide array of in-hospital outcomes, functional status and quality-of-life outcomes, and discharge location. Want to know how 5-meter gait speed has changed over time? It’s in there.

“This is our service to the country — making the data available. The figures represent what we think are the key points to highlight, but this gives people the opportunity to look at the data themselves,” Carroll told theheart.org | Medscape Cardiology.

In a number of ways, these data are sliced and diced differently than in previous reports, he added. For example, 30-day mortality is now broken down according to surgical risk.

“Up until this manuscript, we’ve been reporting TAVR outcomes with everyone lumped together, but with the progressive approval of the FDA to lower and lower risk groups, lumping them all together didn’t make any sense. This is the first manuscript that we really started reporting outcomes based on the heart team’s assessment of surgical risk,” said Carroll.

“So now we’re able to look at just the highest-risk group from 2011 and forward and see clear trends of improved outcomes, although this doesn’t get into the mechanism of the improvement,” said Carroll.

Stroke rates have also fallen over time, albeit moderately (2.75% to 2.3%), while pacemaker need has remained largely unchanged (10.9% to 10.8%), despite the greater inclusion of lower-risk patients.

Still Work to Do

Susheel Kodali, MD, isn’t all that surprised that TAVR has overtaken SAVR for aortic valve replacement. “People always want to move toward less invasive procedures just because they are by and large lower risk,” said Kodali, who is the director of the Structural Heart Valve Center at New York–Presbyterian/Columbia University Irving Medical Center, New York City.

The reduction in 30-day mortality is likely related to the treatment of lower-risk patients, but “we’ve also gotten a lot more experience, and the devices have iterated,” he said. Screening has improved as well.

But he also doesn’t think TAVR is ready to rest on its laurels. He has concerns, particularly because increasing numbers of younger patients are undergoing the procedure. He also has concerns regarding coronary access after TAVR and long-term durability.

“We’re not able to align the valve so that it doesn’t obstruct the coronaries, so access to the coronaries can be challenging, especially when you’re treating a 70-year-old with diffuse coronary disease,” said Kodali.

Long-term durability, he said, also worries him. “We can’t take it out using transcatheter means, but we can put a second one inside, but then we’ve just, by definition, put in too small a valve.”

All that aside, he feels the rollout of TAVR over the past 10 years has been controlled and responsible, and what’s needed going forward is mostly just tweaking.

Carroll and Kodali have disclosed no relevant financial relationships.