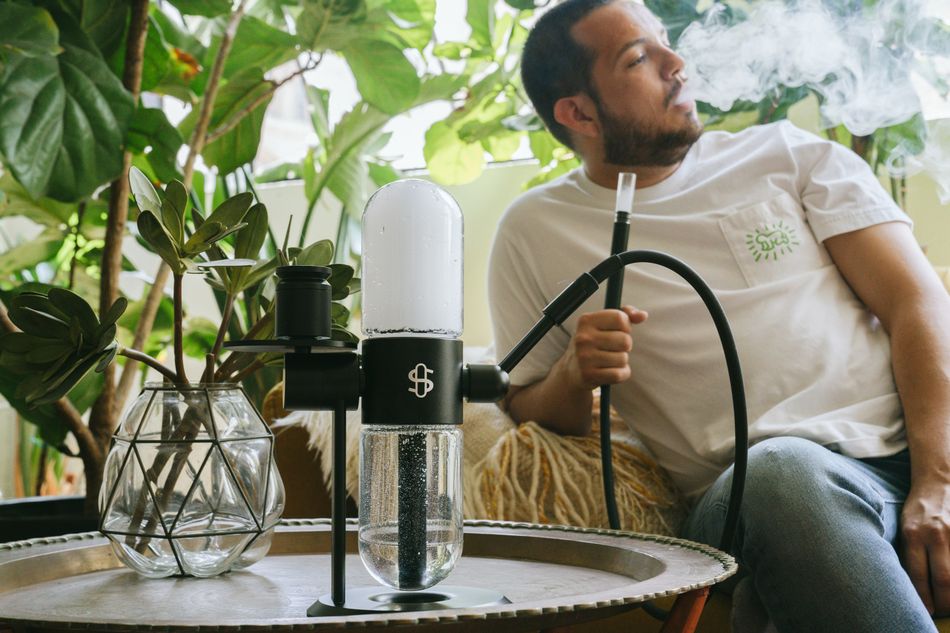 Extremely cool • Well Built • Will get you blasted

Expensive • Requires attention to use

The Stundenglass is a high-quality gravity-powered water pipe that will wow.

The term “gravity bong” can be a bit of a dirty word in the cannabis world. No more with the Stündenglass Gravity Hookah.

For those who didn’t spend a hazy evening of their youth with their head in a 5-gallon bucket, a gravity bong, or “g-bong” uses water and air pressure to force smoke into your lungs. Taking a full bowl to the dome will likely cause the user to get absolutely ripped, hence its popularity among college kids and at parties. Typically, it’s made using items found around the house, like a 2-liter soda bottle and a socket from your dad’s tool set. Sorry, Dad.

While the legalized cannabis industry continues to battle a century of stereotypes, the Stündenglass makes a valiant attempt at reimagining the DIY gravity bong. Unlike a homemade gravity bong, however, the Stündenglass is not made from a plastic bottle or bucket and aluminum foil, and it really benefits from being an actual real glass bong, or water pipe, meaning the hot smoke from the whatever you are smoking is passed through water, cooling it for a more pleasurable experience.

What IS THIS THING?

The Stündenglass is an extremely versatile smoking device, capable of handling flower, concentrates, and shisha tobacco. It looks more like a weird piece of art than a waterfall bong, and there are a number of attachments allowing for various styles of use.

You’ll probably notice the large rotating glass chambers on the Stündenglass, which effectively act as an hourglass. (The name, Stündenglass, means “hourglass” in German.) The user fills the bottom container with water, and leaves the top half empty. While igniting the source, the user then flips the chambers 180 degrees. The negative air pressure causes the smoke to pull through the falling water into the once empty chamber that is now on top.

Flip the chambers once more, and the smoke is expelled by the falling water through the mouthpiece. The user can actually control the amount of smoke being pushed out by how far they turn the hourglass, which is neat, and also makes the bong a little bit more accessible for those who prefer to remember their evenings.

I can attest that this thing, like a regular gravity bong, can and will mess you up. I stupidly decided to go with a full bowl and full hourglass flip my first time trying it out, and I ended up having a coughing fit, which brought me right back to the last time I tried a gravity bong in college.

Again, taking a smooth or smaller hit is possible, it’s all up to the smoker.

The Stündenglass is impressive in its looks and operation, and would be a real crowdpleaser at any party. However, maybe the most important feature of this water bong is the “contactless smoke delivery system.”

Since the coronavirus pandemic, some have begun questioning what exactly cannabis culture will look like when we reach the other side. It may be years before we feel comfortable sharing a joint, bowl, or blunt with friends, let alone strangers at a party. In The Beforetimes, sharing spit while smoking weed was commonplace. But the contactless attachment allows users to inhale smoke without actually putting your mouth on anything. Remember, the smoke is forced out the glass chamber using water pressure, so you don’t have to create an airtight seal with your mouth in order to suck the smoke out like conventional methods of consumption.

Of course, given that the Stündenglass is designed to be used as a hookah too, there is also a typical hookah hose with a glass mouthpiece that can easily be attached for a different experience.

Unboxing the Stündenglass felt more like I was unboxing a piece of tech than a gravity bong, complete with branded stickers. That may be the company leaning in hard on the Apple angle, considering it was engineered by ex-Apple employee Tracey Huston “out of his garage.” Regardless, it was the right move. While the contraption may seem complex and overwhelming at first, giving each piece its own space in the boxing made unboxing more fun and less confusing. Plus, if you ever need to transport it you have a good case for it. Keep the box.

The packaging also makes the piece feel expensive, which is great, because it is expensive. A good glass bong is never cheap, but at $499 the Stündenglass is definitely reaching an upper limit. And, sure, while that is incredibly expensive, you cannot deny the quality.

The base which holds the rotating hourglass is heavy and sturdy, and will not tip over easily. According to some press notes from the company, the unit includes “aircraft grade aluminum, surgical grade stainless steel, and high quality Teflon seals.” Sure, those are some fancy buzzwords — a big upgrade over cobbling something together with  a bottle cap, a bottle, and some scissors — but I can absolutely confirm that this thing is built well and with care, and it will last.

But perhaps one of the most adult things about the Stündenglass has nothing to do with weed, but it’s a major plus from me: The glass chambers are removable so you can pop them into your dishwasher. Smelly bong water isn’t just some urban legend. Bong water stinks, but thankfully the Stündenglass is crafted so that it’s easy to clean and nearly impossible to catch a mouth full of nasty water.

While I had a good time testing out the Stündenglass with dry herb, I did not use the hookah attachment to smoke tobacco, though the setup was easy and everything you need but coals and tobacco is included. It’s just not my thing.

Additionally, Stündenglass was recently acquired by Grenco Science, which makes a variety of cannabis vaporizers. One of the coolest innovations the company offers is the G Pen Connect, a male adapter that attaches to any bong so that you can use concentrates without an elaborate torch setup.

So technically you can use the G Pen Connect with the Stündenglass to create a concentrates gravity bong, but the Connect doesn’t come with the bong, and it’s going to cost you an extra $150 from G Pen.

And finally, because this piece can feel a bit overwhelming, Stündenglass went ahead and uploaded a whole bunch of how-to content — including how to clean it — to its YouTube page. There is a learning curve with this unit, but like everything else, the company went above and beyond in showing the user how to operate the bong.

Overall the Stündenglass is an impressive piece and a fun way to consume whatever you put in it. It’s well built, and feels like a grown up way of smoking marijuana. The price tag may be shocking for some, but the experience is definitely unique.

The information contained in this article is not a substitute for, or alternative to information
from a healthcare practitioner. Please consult a healthcare professional before using any product and check your local laws before making any purchasing decisions.

I just can’t get over how good Fender’s Ac...

How to Find Free Money in the Middle of a Pand...