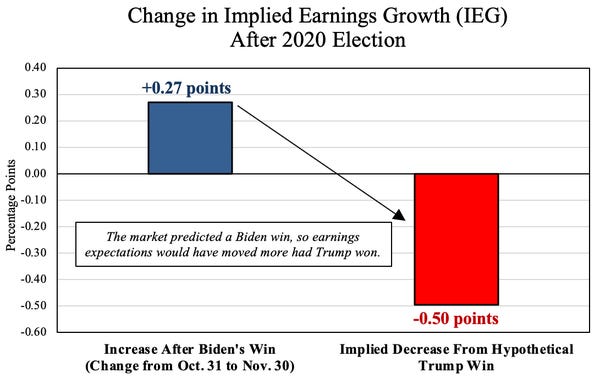 “If he is elected, the stock market will crash,” said President Donald Trump of his then-opponent, Joe Biden, at the October 22 presidential debate.

The buoyant market has long been the president’s favorite metric of his political virility. rendered his lagging poll numbers were a flawed barometer of his reelection chances. People would, Trump believed, vote with their 401(k)s and keep him in the White House. But just to make sure, he took to Twitter eleven times in October to boast of his role in the bull run.

Well, here we are: Joe Biden is the president-elect, and the market has not crashed. Quite the contrary. Between Election Day, November 3, and the first trading day after the Associated Press called the race for Biden, November 9, the S&P 500 index soared 5.4%. By mid-December it was up over 8%.

Trump was, of course, demonstrably wrong in predicting a crash. But can we say what would have occurred had he won? Though we cannot know for sure, we can use statistical analysis to make a well-informed estimate. And the data tell us the market’s preference was clear: it was backing Biden.

We examined stock prices both before and after the election to gauge which candidate would, in the view of investors, be better for business profits. We did so by measuring how the market’s expectations for growth in corporate earnings changed.

As the left-hand bar in the figure below shows, so-called Implied Earnings Growth (IEG) in S&P 500 prices — that is, the expected growth in earnings to which we can attribute the index movements, after stripping out other factors like interest rates — rose by 0.27 percentage points over the course of November. This is a substantial positive effect, indicating that the market was indeed bullish on corporate prospects in a Biden-led economy.

This analysis is highly conservative. We use the IEG change through November 30 to gauge earnings expectations because the market took that long to consider Biden’s win certain. Only at November’s end had courts widely dismissed Trump’s lawsuits and state lawmakers rebuffed Trump’s demands to overturn results. Yet had we measured up to November 9, just after the media called Biden’s victory, or December 14, when the electoral college picked Biden, the IEG change would have been greater than 0.27 points.

Still, that rise documents only a small part of the “Biden bump” in the markets.

By election day, betting markets had put the odds of a Biden victory at 65%. This means that stocks were already pricing in a likely Biden victory. Whatever market rise attributable to earnings-estimate changes came after his victory, then, reflected only the resolution of uncertainty over whether Biden would actually win.

Since the rise in IEG shows that the market thought Biden good for earnings, it means the market thought Trump bad for them. How bad? Well, knowing both the market’s pre-election odds of a Biden victory (65%) and the post-election rise in IEG (0.27 points), we can also estimate how much IEG would have fallen had Trump won. And the answer, as we see in the right-hand bar below, is 0.5 percentage points.

This finding means that the total “Biden bump” was a much higher 0.77 percentage points—equal to the difference between the actual 0.27 point rise and the 0.5 point fall that would have occurred had Trump won.

But just how substantial is a 0.77 point boost to IEG from the election? Interestingly, it is, as shown below, virtually identical to the “Trump bump” that accompanied Trump’s upset victory over Hillary Clinton in 2016.

This finding may sound counterintuitive. The market clearly liked Trump’s 2017 corporate tax cuts — the announcement of which, we estimate, boosted stock-market IEG by 0.20 percentage points. We can also infer that it liked much of his deregulatory agenda. Why, then, should the market be happy with a new president who pledges to raise corporate tax rates from 20%to 28%, and who pledges to tax US firms’ foreign profits? These are clear negatives for Biden.

The first, and by far the most important, is the COVID-19 pandemic. A post-election PwC survey of business leaders, for example, identified COVID-related issues, such as shutdowns and associated financial stress, as by far their number one concern. And an astonishing 84 %of executives surveyed by Yale School of Management Professor Jeffrey Sonnenfeld said the Trump administration’s response to the pandemic had hurt their businesses.

Significantly, stocks which did particularly well in the week after the election, according to the New York Times, were those of companies that had been hard-hit by the pandemic (such as shopping-mall operator Simon Property Group), while stocks of pandemic winners (such as Peloton and Zoom) were lower. It is clear that the market anticipated a far more effective response to the pandemic from a Biden administration.

The second factor is improved prospects for another large stimulus package. “We now see a path toward a significant stimulus package getting done towards the end of the first quarter in 2021,” said Mike Feroli, Chief US Economist at JPMorgan: “Such a stimulus deal would provide a meaningful boost to growth in Q2 and beyond.”

The third factor is foreign and foreign-economic policy. A pre-election PwC business-leader survey revealed far larger concerns over Trump than Biden in the areas of US-China business relations, immigration policy, and trade and foreign policy broadly.

Finally, it is worth noting that if Republicans keep control of the Senate they will be able to block Biden’s tax rises. His negatives for corporate earnings, then, may never come to pass.

In short, Trump — despite delivering lower taxes and reduced regulation — is no longer seen as good for business. His volatile and indifferent handling of the pandemic has held back business recovery. His outsourcing of stimulus policy to the GOP Senate has delayed and reduced much needed fiscal support to states and consumers. His tariffs and trade war with China have harmed US competitiveness. And his alienation of allies has created new geopolitical risks and unprecedented uncertainties.

It is no wonder, then, that the market welcomes President Biden.

Benn Steil is director of international economics at the Council on Foreign Relations and author, most recently, of The Marshall Plan: Dawn of the Cold War. Benjamin Della Rocca is an analyst at CFR.

What mobile developers can learn from Angry Bi...

Trump wanted US to sue states to overturn elec...