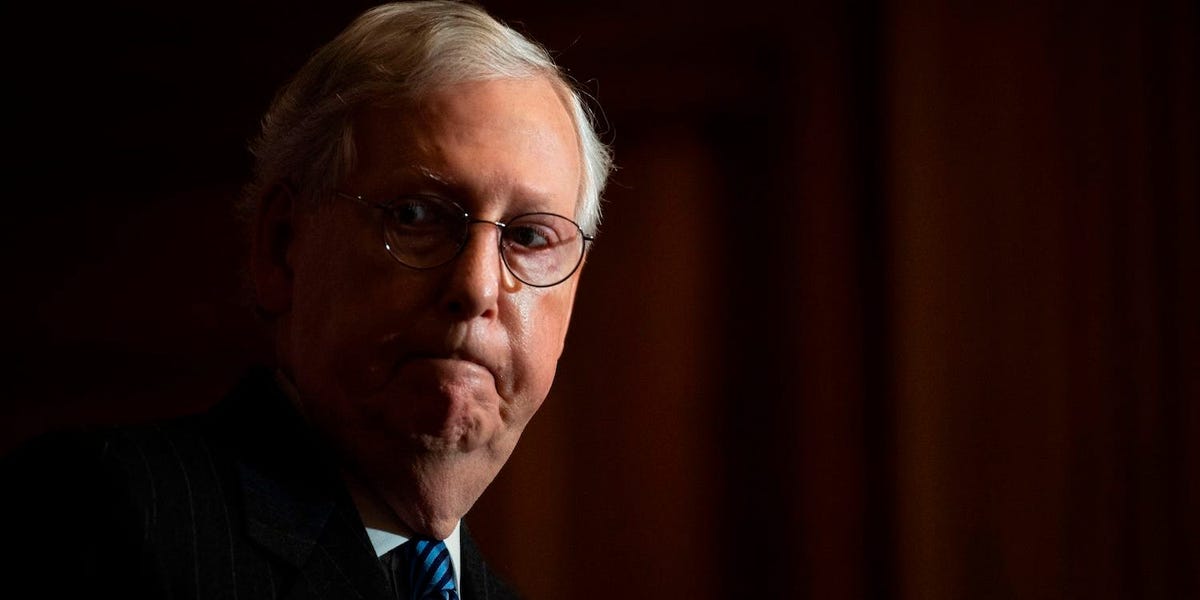 A late Republican push to curtail the Federal Reserve’s lending authority formed a major roadblock in stimulus negotiations on Saturday — and it threatens to stretch the talks on a $900 billion emergency spending package into next week.

The clash over the Fed between Republicans and Democrats intensified on Capitol Hill. Politico reported that Senate Majority Leader Mitch McConnell told senators in a caucus call that Republicans should stand firm with Sen. Patrick Toomey. He’s demanding to cut off the central bank’s emergency lending powers after they sunset on Dec. 31, the current expiration date under the CARES Act which Congress approved in March.

As the pandemic swept the US and devastated the economy earlier this year, the central bank set up an array of programs to aid the flow of credit and provide loans to mid-sized businesses, along with state and local governments. The proposal would restrain the Fed’s ability to restart those programs without congressional approval. Toomey, the incoming chair of the Senate Banking Committee, called it “a bright red line” this week.

The ensuing fight could imperil the odds of a relief package passing both chambers of Congress this weekend, and raises the prospect of a shutdown given the deadline for government funding to dry up on Sunday evening.

Lawmakers authorized a two-day funding extension late on Friday to settle longstanding policy differences. The $900 billion federal assistance package is expected to include $600 stimulus checks for many Americans, $300 federal unemployment benefits, vaccine distribution funds, as well as another round of small business aid.

Republicans say that keeping the Fed’s emergency lending programs in place could cause the institution to overstep its historic boundaries as a lender of last resort. They also contend the Fed initiatives could create an avenue to aid states and municipalities, long a Democratic priority.

Sen. John Kennedy of Louisiana, a GOP member of the Senate Banking Committee, told reporters that maintaining those programs could turn the Fed into “a commercial bank” and said “we’re gonna stand firm.”

Kennedy also suggested relief talks to resolve the issue could stretch on to “New Year’s or Christmas Eve.”

Democrats are fiercely resisting the measure. They argued its a political move aimed at crippling President-elect Joe Biden’s ability to manage the recovery while simultaneously jeopardizing the Fed’s capacity to respond to future recessions as well.

“The last thing America needs right now is to make it tougher to help people in communities and that’s what this proposal does,” Sen. Ron Wyden, ranking Democrat on the Senate Finance Committee, said in a brief interview on Capitol Hill. He added it was “a significant sticking point” in the volatile negotiations.

Not every Republican appeared to be onboard with Toomey’s proposal. Sen. Mitt Romney of Utah told Business Insider in a brief interview that pursuing major Fed reforms could wait until next year.

“I think the Fed should be returned to the powers it had prior to the CARES Act, but I think other reforms should wait for another time,” Romney said.

Senators discussed the divide during a confirmation vote on the Senate floor on Saturday afternoon, and a group that included Toomey and Romney broke off and met in Senate Minority Leader Chuck Schumer’s office. After leaving, Toomey said, “I think that we should be able to get a deal done.”

The fight on Capitol Hill elicited a rare public statement from Ben Bernanke, who served as chair of the Federal Reserve during the 2008 financial crisis. He said the central bank’s emergency lending powers from before the pandemic should remain “fully intact,” adding it was “vital” for its ability to respond to future financial or economic crises.

A failure from Congress to pass a new relief package carries potentially calamitous consequences for many Americans. Unemployment claims have risen for the past three weeks, and nearly 13 million people are threatened with the loss of all their unemployment assistance if some federal measures are not renewed by year’s end.

An eviction on moratoriums also expires on December 31, which would put millions of Americans at risk of losing their homes.

5 jobs that you should apply for this week (be...

Ron Johnson talks about money and the moon dur...