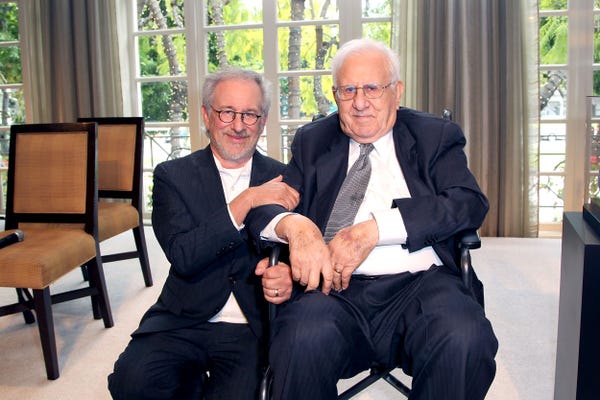 Steven Spielberg’s father served in World War II and the director’s dad has been a major influence on the director’s career. Arnold Spielberg died this week at 103, so let’s take a look at how he inspired his son to make some of the greatest films and TV shows about the greatest generation.

Like many young men of his generation, Arnold Spielberg enlisted in the Army within a month of the December 7, 1941, Japanese attack on Pearl Harbor.

He served as a radio operator and chief communications man for the 490th Bomb Squadron, nicknamed the “Burma Bridge Busters” after their assigned mission to bomb Japanese bridges and railroad lines. Spielberg volunteered for two combat tours in the China Burma India theater of war.

Arnold married Leah Posner after his return home and son Steven was born in 1946 at the beginning of the post-war baby boom. He developed a fascination with gadgets during his military service and got an engineering degree from the University of Cincinnati on the G.I. Bill.

That led to a career in the new field of computer science that included stints working for RCA, GE, Electronic Arrays, SDS, Burroughs and IBM.

Steven credits his dad for his own devotion to new technology. “When I see a PlayStation, when I look at a cell phone — from the smallest calculator to an iPad — I look at my dad and I say, ‘My dad and a team of geniuses started that.'”

Arnold Spielberg also supported his only son’s devotion to movies, giving him access to gear and helping his teenage son make his first films with a home movie camera. The 1961 short “Fighter Squad” was shot at the Sky Harbor Airport hangar in Phoenix and featured grounded former WWII fighter planes.

Here are five World War II movies from a storied career, movies that would never have been made without the influence and early support of Arnold Spielberg.

“Saving Private Ryan,” released in 1998, refocused American minds on the heroes of World War II and kicked off two decades of tribute to the men and women who won the war.

Capt. John Miller (Tom Hanks) leads his men behind German lines to rescue a missing soldier and teaches everyone the importance of shared sacrifice. The 20-minute opening sequence recreates the Allied Forces’ D-Day landing on Omaha Beach and stands as the greatest battle sequence in movie history.

“Saving Private Ryan” is currently available to stream on HBO Max and on 4K UHD, Blu-ray, DVD and Digital.

“1941,” released in 1979, lampoons the panic in Los Angeles about a rumored Japanese invasion in the days immediately after Pearl Harbor. American wasn’t exactly ready for a World War II farce back then and the movie has a reputation as one of Spielberg’s rare failures.

“1941” is currently available on Blu-ray, DVD and Digital.

“Schindler’s List,” released in 1993, won seven Oscars, including Best Picture and Spielberg’s first Best Director Oscar. More importantly, it told the story of the Holocaust for a mainstream audience by focusing on one of the few heroes from that terrifying chapter of World War II history.

Oskar Schindler was a German industrialist who protected his Jewish employees from Nazi extermination by employing him in his factories. The real-life Schindler is credited with saving 1,200 lives during the war.

Spielberg’s family is Jewish and the movie is just as much about the lives lost as the lives saved. It’s shot in black-and-white and effectively conveys the horror and the sadness while chronicling the heroism of a man who chose to resist the Nazi regime.

“Schindler’s List” is currently available to stream on Netflix and on 4K UHD, Blu-ray, DVD and Digital.

“Empire of the Sun,” released in 1987, features a 12-year-old Christain Bale in a movie based on J.G. Ballard’s novel about a young English boy living in Shanghai, China after the Japanese invasion. Separated from his family, he’s forced to grow up to survive over the course of the war.

The movie was originally set to be directed by the great David Lean and produced by Spielberg. Lean won Oscars for directing “The Bridge on the River Kwai” and “Lawrence of Arabia.” Both movies also won Best Picture and stand among the greatest war pictures ever made. Spielberg considers Lean a major influence on his filmmaking and aimed to make the same kind of epic once Lean dropped out of the movie.

“Empire of the Sun” is currently available to stream on HBO Max and on Blu-ray, DVD and Digital.

Let’s hope the 1961 “Escape to Nowhere” is safely stored in the Spielberg family archives and will be available for aspiring filmmakers to study someday. For now, we’ve only got the blurry (but still impressive) excerpt that’s available on YouTube.

The clip that exists shows that young Steven was already learning how to shoot and edit a scene. Are uniforms wrong? Are the production values non-existent? Sure, but what were you doing when you were 15?

This list doesn’t include the Spielberg productions of “Band of Brothers” (2001) and “The Pacific” (2010). Each epic HBO series took its inspiration from the camaraderie on display in “Saving Private Ryan” and told more stories collected by historian Stephen Ambrose. Both shows are streaming on HBO Max and available on Blu-ray, DVD and Digital.

Spielberg and Apple TV+ are making yet another World War II series called “Masters of the Air” and have yet to announce a release date.

Spielberg also produced the outstanding Netflix documentary “Five Came Back,” based on Mark Harris’ book about five of Hollywood’s most legendary directors and their service in World War II.

Arnold Spielberg may have had the most influence on “The Mission,” a 1985 episode of the original “Amazing Stories” television series personally directed by Steven. Kevin Costner and Kiefer Sutherland star in this show about a WWII tail gunner trapped in the belly of a B-17. You can stream this episode in the NBC app or on NBC.com. The “Amazing Stories” series is available on DVD and digital.

Finally, don’t forget the Nazi bad guys in “Raiders of the Lost Ark” (1981) and “Indiana Jones and Last Crusade” (1989). Some people want to count them as World World II movies, but even we’re willing to admit that’s a stretch. Both are streaming on Netflix and both are available on Blu-ray, DVD and Digital.

The legacy of Arnold Spielberg offers a great lesson for parents. Support your kids. Encourage their creativity and provide them with whatever gear you can. Raise them right. They might not become one of Hollywood’s greatest directors but they’ll make you proud some other way.

This graphene hoodie warms up at least 5 degre...

Here's what will expire if Congress doesn't pa...