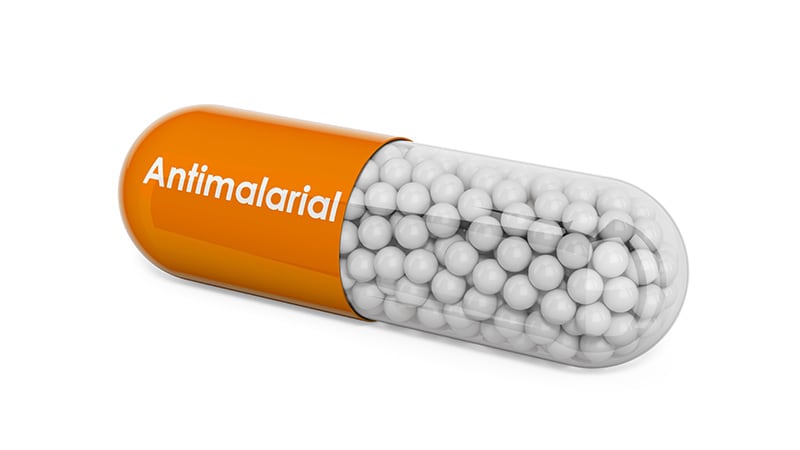 Slowly tapering off – or remaining on – antimalarial medications can help prevent disease flare in patients with systemic lupus erythematosus (SLE) who’ve achieved clinical remission for at least a year, according to a new study that was presented at the virtual annual meeting of the American College of Rheumatology.

“Except in the setting of toxicity, cessation of antimalarial medication in patients with disease quiescence is feasible using a slow taper,” lead author Danaë Papachristos, MBBS, said during an oral abstract presentation at the online meeting. Papachristos conducted the research while a clinical and research fellow at the University of Toronto’s lupus clinic, but is now a consultant rheumatologist at the Wesley Hospital in Brisbane, Queensland, Australia.

To investigate flare in patients with SLE who were on or recently off antimalarial medications (AMs), the researchers identified 1,573 potential participants from a long-term observational cohort study at the university’s lupus clinic. From that larger group, 88 cases – patients who achieved clinical remission for at least a year and stopped taking AMs – were matched to at least one control – patients who also achieved remission and continued on medication. Most cases were also matched to a second control, bringing the total number to 173. All patients had at least 2 years of follow-up.

Disease flare occurred in 61.4% of cases, compared with 45.1% of controls (P = .002), with the most common types being cutaneous and musculoskeletal flares. After multivariate analysis, the risk of flare more than doubled for those who ceased AMs (odds ratio, 2.26; 95% confidence interval, 1.24-4.11; P = .008). More than half of the cases (n = 46) restarted AMs after withdrawal, which was largely due to disease flare. Of the patients who restarted due to flare, 88% either recaptured control or improved, and the remaining 12% had further flares.

When asked about other differences in medications between the two groups, Papachristos answered: “We didn’t look into that specifically. We did look at those patients who were on prednisone and on any immunosuppression, although we didn’t look at specific therapies. Those variables were adjusted for in the analysis, and it didn’t make any difference if patients were on immunosuppression or prednisone at the point of index date.

“But we would like to look into the different forms of immunosuppression,” she added, “just to see if that made any difference.”

Older patients with SLE who discontinue their use of hydroxychloroquine (HCQ) are also not at increased risk of disease flare, according to a retrospective chart review from rheumatologists Ruth Fernandez-Ruiz, MD, and Peter M. Izmirly, MD, of New York University (Arthritis Res Ther. 2020;22:191. doi: 10.1186/s13075-020-02282-0).

“We wanted to focus on older patients who may have a lower risk of flaring and a higher risk of side effects from the drug,” Fernandez-Ruiz said in an interview.

The doctors embarked on the study after noticing eye and heart toxicities in certain older patients. They matched 26 lupus patients who had been on HCQ for at least 5 years before discontinuing the drug with 32 control patients who remained on HCQ, ultimately finding that withdrawal had no effect on their risk of lupus flares within a year.

“After starting a drug, the second question most people ask, after ‘What are the side effects?’ is ‘How long do I have to be on this?’ ” Izmirly said in an interview. “These patients are having side effects associated with long-term HCQ use. And we were noticing that, after you stop the drug, despite what you’re taught, they weren’t flaring.”

“On each side, the overall flare rate was not that high, and they were all relatively mild,” Izmirly said.

The two doctors acknowledged their study’s smaller sample size, compared with the study by Papachristos and colleagues, along with the advanced age of their patient population, which limits the generalizability of their findings. “We selected patients who had a very low disease activity to begin with, and who were older,” Fernandez-Ruiz noted.

That said, they reinforced the scarcity of existing research on this subset of lupus patients, one that will only continue to grow.

“Older [patients with] lupus,” Izmirly said, are “an understudied demographic.”

One of the authors of the study presented at ACR 2020 acknowledged receiving research support and consulting fees from various pharmaceutical companies. The HCQ study was supported by a grant from the National Institute of Arthritis and Musculoskeletal and Skin Diseases; its authors declared no conflicts of interest.