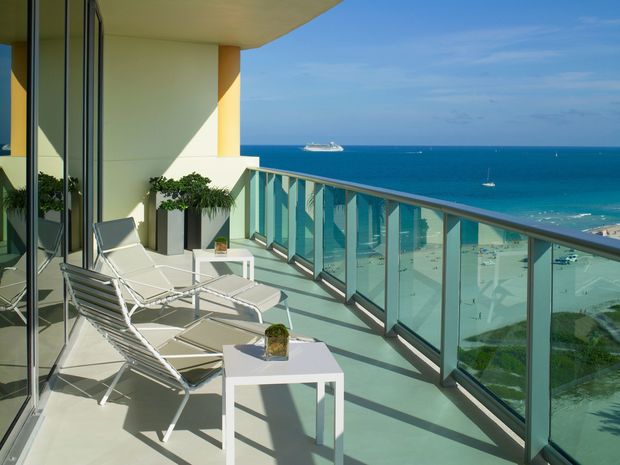 The blockbuster producer and his wife, the novelist Linda Bruckheimer, picked up two spectacular ocean-view condos in 2005, for a combined $12.7 million.

They proceeded to tap the late, famed Parisian designer Andrée Putman to transform the modern interiors into a photogenic showcase.

Inside, the custom interior features three bedrooms, 3.5 bathrooms, a living and dining room on a grand scale, an entry with a dramatic curved staircase, and enviable views through floor-to-ceiling windows.

In addition, the spacious master bedroom opens out to a balcony and includes a seating area, as well as its own bath and dressing area. A spiral staircase leads to the rooftop.

Along with views of Miami Beach to downtown Miami, you can also get to the sights quickly. The penthouse tops Il Villaggio, a centrally located residential building in the heart of Miami Beach.

The locale is close to the beach, shopping, and dining. Amenities include concierge service, valets, 24-hour security, fitness center, and a heated pool.

The couple are reportedly shedding the property because they are no longer spending as much time at the waterfront residence.

But they have plenty of other lovely residences to choose from, including a $23 million Beverly Hills mansion, a 400-acre Ojai ranch, and a 1,600-acre farm in Louisville, KY, Variety reported.

Bruckheimer is known for producing the hit TV series “CSI,” and boffo box-office content such as “Bad Boys,” “Pirates of the Caribbean,” and “Armageddon,” as well as the highly anticipated “Top Gun” sequel, “Top Gun: Maverick.”

This story was originally published on Realtor.com.