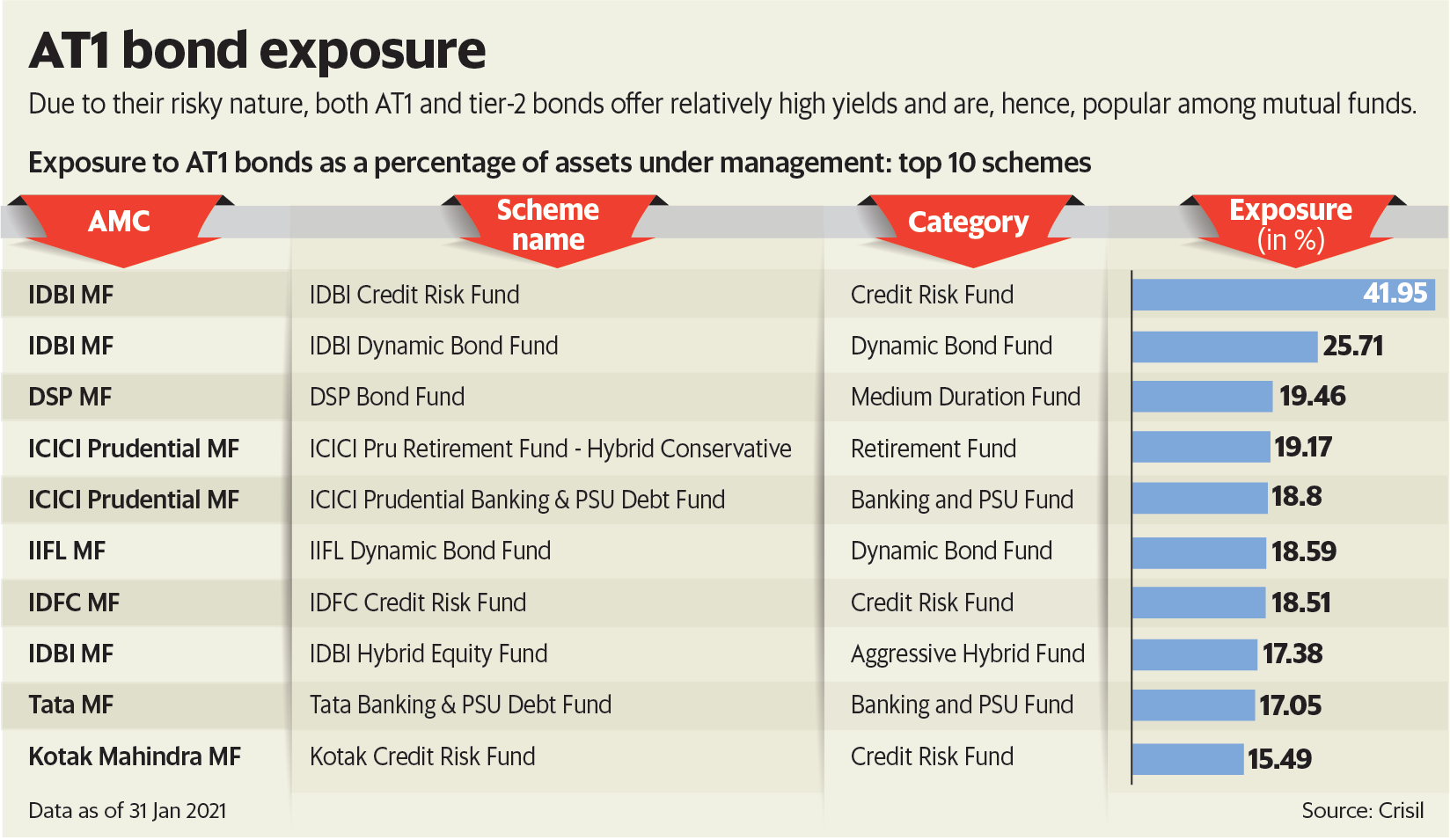 Mumbai: A Securities and Exchange Board of India (Sebi) circular issued on Wednesday capped mutual fund (MF) investment in bonds with special features to 10% of scheme assets and 5% for a single issuer. This includes additional tier-1 (AT1) bonds as well as tier-2 bonds issued by banks under Basel III norms.

Sebi has also laid down valuation norms for such bonds, mandating that AT1 bonds should be valued as if they have a maturity of 100 years.

According to industry executives, this may force down the value of such bonds and lower the net asset values (NAVs) of the mutual funds holding them. The circular comes into effect from 1 April 2021, but executives worry that some fund houses may not even wait for that date to revalue their bonds.

AT1 bonds are bonds issued by banks which do not have a maturity date and are, hence, called perpetuals. Mutual funds value them as if they are maturing on their call date—the date on which the issuer may call back bonds and repay their holders, but there is no compulsion on the issuer to do so.

Sebi, however, has laid down that such bonds should be valued as if their maturity is 100 years. Apart from their long maturity, AT1 bonds are designed to take losses if the bank’s capital dips below certain levels, for instance due to non performing assets . In the case of Yes Bank, in early 2020, AT1 bonds were wiped out when the bank was rescued by SBI.

Tier-2 bonds under Basel III norms are also designed to take losses if the bank issuing them fails. This happened in the case of Laxmi Vilas Bank in the same year when its tier-2 bonds were wiped out.

Due to their risky nature, both AT1 and tier-2 bonds offer relatively high yields and are, hence, popular among mutual funds.

Industry executives estimate that funds own around ₹25,000 crore of such bonds, which is about 35% of the total amount outstanding of about ₹70,000 crore.

The 10% cap and 5% single issuer cap imposed by Sebi is not the source of worry. This is because the regulator has ‘grandfathered’ the existing exposure, allowing mutual funds to continue holding such bonds bought before the circular comes into effect.

However, industry executives are wary of other aspects of the circular. Several categories of mutual funds are required to keep their portfolio Macaulay duration within certain bands, for example 1-3 years in case of short duration funds. The new valuation norms may alter the portfolio duration of such funds and breach these limits, said the head of risk at a large fund house on condition of anonymity. However, Dhaval Dalal, chief investment officer, fixed income, Edelweiss Asset Management, dismissed such apprehensions.

“In schemes with duration restrictions, a breach in duration band due to these norms will likely be considered as a passive breach due to a change in valuation norms and the existing exposures will be grandfathered,” he said.

Fund managers, however, worry about valuation losses in their portfolio due to the 100-year maturity rule, which could, in turn, spark mass withdrawals from investors. This is particularly a risk in an environment with rising yields and rising interest rates. Long maturity bonds tend to be particularly sensitive to interest rates

A debt fund manager at a mid-sized fund house who declined to be named added that fund houses may be forced to sell such bonds if there are large exits by investors apprehensive about facing losses.

“The revised valuation of these bonds could put pressure on funds and their liquidity profile at an inopportune time as secondary market liquidity in AT1 bonds is limited after tightening of regulatory norms. Average daily volumes at ₹15-20 crore may not be sufficient for mutual funds for an orderly exit from these bonds based on their total AT1 bond holding of around ₹25,000 crore as of February 2021,” Dalal said. Fund managers also argue that India does not have a long yield curve and hence it may be difficult to accurately value the funds even with the best of intentions. “Amfi has requested Sebi officials over a call today to also grandfather the valuation portions of the circular,” said the head of risk mentioned above. “I expect a relaxation from the regulator as soon as tomorrow. Investors should not redeem in a hurry,” he said.

While investors may face short-term pain, experts spot opportunities. “Due to high participation by retail investors, Sebi wants to protect and safeguard debt MFs from perceived risks that may arise from investing in instruments such as perpetual bonds. In case MFs are forced to sell perpetuals due to the circular, and there is a short-term dip in prices, this could present opportunities for high net-worth individuals (HNIs) and corporates,” said Yatin Shah, co-founder and joint CEO, IIFL Wealth. These bonds carry a high level of risk and are not recommended for retail investors.