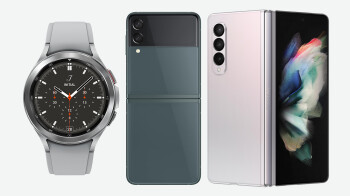 By now, we know almost everything there is to know about next week’s Galaxy Z Fold 3 and Z Flip 3 announcement. Heck, both Samsung 2021 foldables leaked just yesterday in gorgeous high-res official renders with the specs to match.

When it comes to that all-important detail, however – the Galaxy Z Fold 3 and Z Flip 3 pricing – the tips are all over the place. They range from more expensive than their predecessors to much less expensive but when Mr Evan Blass from @evleaks posts what seems to be official pricing from a Samsung website, and tacks on the Galaxy Watch 4 prices, that’s as good as it gets.
If you are wondering what’s “B2” and what’s “Wise” in the pictures, these are Samsung’s internal codenames for the Z Flip 3 and Watch 4, respectively, and that’s what leads to the thought that these were scraped off directly from a Samsung website.

The pricing for the most souped-up 512GB model of the Z Fold 3 is disclosed as 1999 EUR, while that, and in some European countries even higher, was the starting price for the basic Z Fold 2 last year. The 256GB model is 1899 EUR, and that is cheaper by a hundred from the basic Fold 2 already.

Last year, those European prices directly converted to dollars, rather than their equivalent, and some indications show that Samsung may be making a PR move by lowering the Z Fold 3 price in the US even further, so we wouldn’t be surprised if the heretofore $1799 rumors are confirmed upon launch.

While a Benjamin or two off the Z Fold 3 pricing compared to the starting tag of its predecessor may not seem much, remember that you are getting a much more powerful handset with S Pen support and two high refresh rate displays this time around, not to mention the novelty of the under-panel camera on the main display.

With the Z Flip 3, Samsung is cutting prices even more significantly, it seems. Instead of the OG Z Flip’s €1359 starting price in Europe, the Galaxy Z Flip 3 blasts off from just €1099 for the 128GB, making it the cheapest foldable of 2021.

The 256GB Galaxy Z Flip 3 version comes in at €1149, again a large drop in pricing from its predecessor. You, however, will be getting a much more powerful processor, tougher foldable glass, and larger external display.

Samsung’s Galaxy Watch 4 and Watch 4 Classic pricing has also been leaked here, and the tips confirm they will be cheaper than their predecessors, too. The 46mm Watch 4 Classic, which is the equivalent of last year’s 45mm Watch 3, will cost €409, whereas the Watch 3 started north of €450 in Europe. The 42mm Watch 4 Classic price is pegged at €379, again lower.
While last year the Watch 3 started at this leaked Watch 4 Classic price, but in dollars, the $379 price in the US will be lower this year, claims leakster Snoopytech, by $30. We’ll see if this claim pans out, but if the Watch 4 Classic starts at a $349 price for the smaller 42mm version indeed, this will lend further credence to Samsung’s reduced pricing trend of 2021, a very welcome one.
The Watch 4, which will be the Watch Active equivalent, or, nudge, wink, the Apple Watch SE – a cheaper, sportier version – starts from just €279 for the 40mm version, and €309 for the larger, 44mm model.

Last but not least, the €159 price tag of the upcoming Galaxy Buds 2 – active noise cancellation, long battery life and all – actually measures up lower than the launch price of the Buds Pro there, for instance.

As is becoming customary, Samsung is giving you the option to get the Galaxy Z Fold 3 or Z Flip 3 right now with the following preorder bonuses: