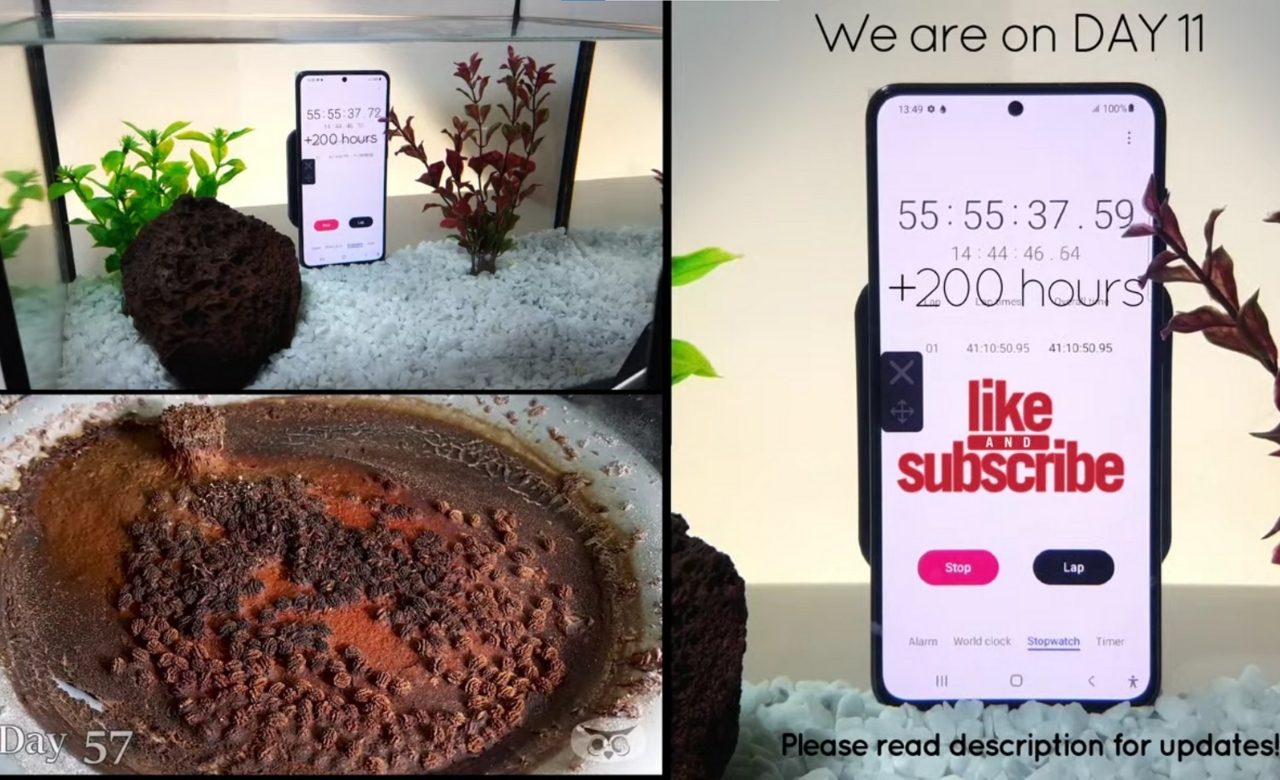 Here is something that might just tip the scales in Samsung’s favor if you have been on the fence on whether to pick up the latest Samsung Galaxy S21 or not. A videographer has been broadcasting a timelapse video of a Samsung Galaxy S21 being fully immersed in a water-filled aquarium for 12 days straight – in order to “test the level of its waterproof capability”. Currently, the video stream is still active and the smartphone continues to function as it should.

The videographer behind this stream is the owner of a channel known as Photo Owl Time Lapse, which is unique as it is specially dedicated to accelerated frame-by-frame views of videos/photos taken over a long period of time of a particular subject. The photographer normally focuses more on timelapse shots on the gradual degradation of food products, twilight landscapes, or changes in weather.

But this time around, there is a tech slant to the latest effort. It is a Samsung Galaxy S21 that is the subject of his latest photographic experiment. The YouTuber claims to have plunged the smartphone into an aquarium that has been filled with fresh water for more than 12 days. There is even a counter that indicates how the immersion has lasted for 267 hours and counting.

The stream itself has only been active for 16 hours so far. The videographer explains that he had to restart the smartphone’s timer, which freezes after 100 consecutive hours. And he may also have had to restart his stream several times.

How does the smartphone keep on going underwater for so long? Is there a new kind of battery that no one else is privy to? Not really, as the videographer used an ingenious method by clipping a wireless charger to one of the aquarium’s windows in order to keep the Samsung Galaxy S21 juiced up at all times. However, in his video description, he stated that the timer displayed on the smartphone freezes after 99 hours, 59 minutes, and 59 seconds. This required him to restart the timer twice since the beginning of his “test”.

” After 117 hours and 53 minutes of immersion, the smartphone began to display a humidity alert. The screen no longer responded and the interface jumped frantically from one application to another. But after pressing a few buttons, the smartphone worked again, although the humidity alert was still present,” the videographer also explained.

A third YouTube update indicated that after 241 hours, and at the request of his few viewers (numbering less than a hundred), he tested the speakers, which were delivering mediocre and almost imperceptible sound.

The smartphone has indeed proven itself worthy of its IP68 certification. IP as “Ingress Protection” is an index of the IEC, the International Electrotechnical Commission, which certifies the degree of water resistance and dust infiltration of an electronic device.

On the other hand, certain parameters are left to the manufacturer’s discretion, particularly with regard to the duration of the tests carried out. Generally speaking, the resistance involves fresh water and not sea water for about 30 minutes. This IP68 rating does not really mean that the smartphone is totally waterproof in all circumstances, so do be aware of that.

As for now, assuming the YouTuber’s test protocol turns out to be honest and accurate, the Samsung Galaxy S21 is doing pretty well, surpassing more than 260 hours of being fully immersed. The stream is surprisingly relaxing to watch with the music playing in the background, so you might just want to leave that on while you keep yourself occupied with other activities.