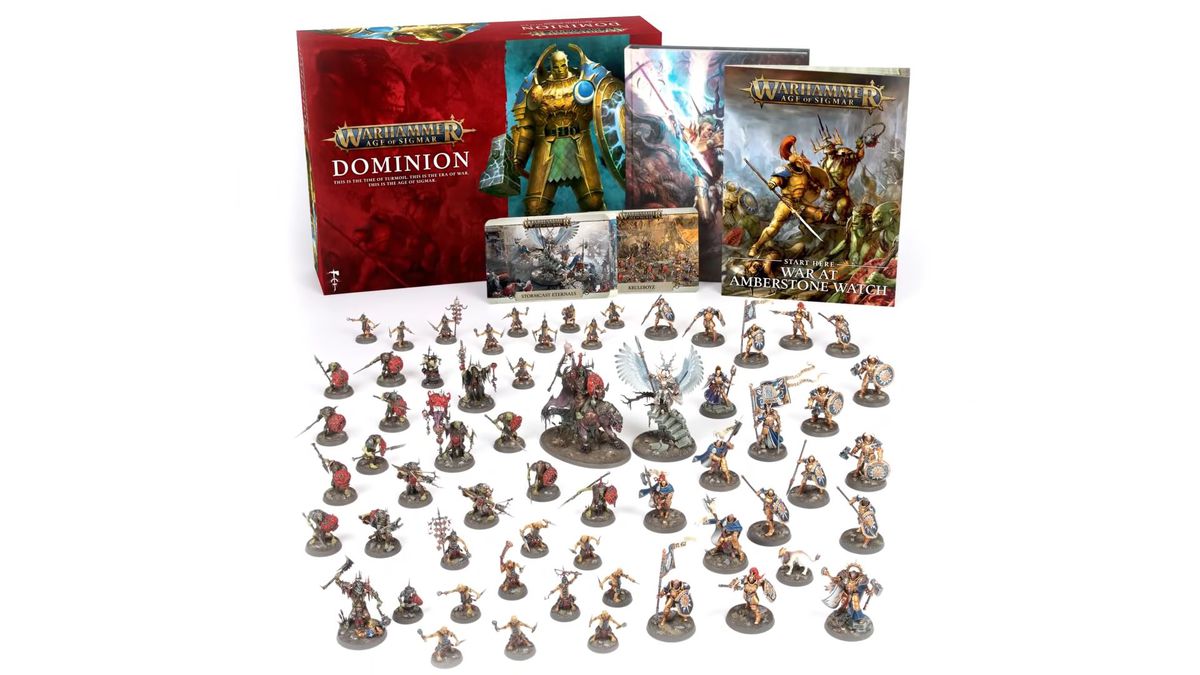 It’s been three years since the release of Age of Sigmar: Soul Wars, the second edition of Games Workshop’s flagship high concept, high fantasy miniatures wargame. Now, like clockwork, the British publisher is ready with a revised third edition.

Leading the charge is a new collectible boxed set, Age of Sigmar: Dominion, and three smaller starter sets. What was once a muddled setting with a stilted ruleset, Age of Sigmar is accelerating its growth, breaking away from existing tropes and evolving into something unique and memorable. If you were looking for a place to jump into the hobby, now is an exceptionally good time.

When Age of Sigmar’s first edition came out in 2015, it fell somewhere between the outsized popularity of the science fiction-themed Warhammer 40,000 and the leftovers of Warhammer Fantasy Battles, which was sunset around the same time. Age of Sigmar is set in the Mortal Realms, a system of eight interconnected planes spawned from the winds of magic. Within these eight realms, the occupants fight for reasons different from each of the realms themselves. Such as the Orruks, who prefer to fight for fun, whereas the Fyreslayers opt for finding treasure. Regardless of the reasons, there are none in the mortal realms that are free from the endless cycle of war and carnage.

During the initial launch, the fantasy tabletop game struggled to make a footing within the product lineup. Warhammer Fantasy Battles was well loved among die-hard tabletop players, and it left a bad taste when reborn into Age of Sigmar shortly after. The release of Age of Sigmar damaged player confidence as they were still upset by the ending of Warhammer Fantasy’s “Old World,” which had decades of story and was a beloved setting for many.

Going further, Warhammer 40,000 gobbled up a sizable chunk of the fantasy game’s player base during the transition, and that only stifled Age of Sigmar’s launch further. Since the release of Soul Wars in 2018, it has rebounded with a more refined ruleset, a flavorful backdrop of lore, and dynamic models that have clawed back some of the player base it once lost.

The lead product in this new third edition is simply massive. Subtitled Dominion, the limited-run boxed set includes 58 models (21 Stormcast Eternals and 39 Kruleboyz) and a lavish, collector’s grade edition of the core rulebook. It’s everything you need to make two smaller armies, perfect for your first few starter games.

Let’s look at the two armies and the models you get in this decent value box.

The Stormcast Eternals are immortal warriors and the face faction of the Age of Sigmar franchise. Divine warriors encased in towering suits of armor, a bit like fantasy Space Marines, they’ve always seemed to be a little static in their stances. The latest update features much more fluid poses, providing more engaging models — as seen with the stunning Yndrasta, the Celestial Spear.

The Stormcast Eternals are the poster boys for this franchise, an ideal starting army for any Age of Sigmar beginner. Most importantly, fans can be assured that the faction will continue to grow with new units over time.

Facing down the Stormcast Eternals are the wicked Kruleboyz, part of a brand-new faction known as the Orruks. If you have an appreciation for sinister-looking models which refer to old-school orcs from a more traditional fantasy setting, then this faction is for you. Like the Stormcast Eternals, the Orruks are swimming with detail and the sort of dynamic poses we’ve come to expect from Age of Sigmar boxes as of late. Leading the charge of the Orruks in this box is the gnarly and impressive looking Killaboss on a Great Gnashtoof mount.

While this release doesn’t possess a swathe of new terrain to support the miniatures in the box as seen in Kill Team or Necromunda release, Age of Sigmar: Dominion offers a decent core play experience.

Outside of actually painting up all those miniatures, most of your time will be spent with the rulebook. Most of it is dedicated to the intricate lore of the game, which is a common feature of Games Workshop rulebooks. Inside are all the rules needed to play competitive matched play, a more casual style known as open play, and the role-playing narrative play which is a combination of both. After you have assembled the models, the set-up to play is straightforward. Firstly, you choose a battlepack in your rulebook which outlines how to create your battlefield, deploying your army and the victory conditions for the game. Once agreed with your opponent, you set up your army and each unit in your army has a points value, which reflects how powerful or rare it is. You use these points to buy units as agreed within the battlepack, then you place the models on a suitable tabletop surface and begin the game.

In a given turn you will choose units to move, cast spells, charge and attack using rulers and dice to measure distances and combat. In most games, you’ll be using a battle plan to organize how to fight over objectives and providing command abilities to turn the tides of battle in your favor. Using spells correctly is one of the harder lessons to learn in Age of Sigmar, since they alter the tide of combat and the limited number of counter chances means you have to time your spells carefully. After a few games of Dominion, you’ll have an understanding of how to use spells to your full advantage. An example is Speed of Lightning, a Stormcast Eternal spell where you pick a unit that can reroll charge dice rolls. This can help guarantee your units can get into combat in a timely fashion, but knowing how to use it correctly will offer a better chance of victory.

Overall, Age of Sigmar: Dominion is a hit. It takes a complicated ruleset and parses it in an easy way for players to understand. This is especially the case for newer players, who will be able to straightforwardly read the rules with few issues; the enfranchised crowd can likewise catch up on the new changes quickly. This remains the Age of Sigmar you know and love, but removes itself from the trope of “simplified Warhammer 40,000” and begins to stand above the rest of the Games Workshop lineup.

With an elegant rulebook, eye-catching models and with decent value for money in the box, there has never been a better time to jump into Age of Sigmar. You can even grab the rules for free online and get started with whatever models you already have.

Warhammer Age of Sigmar’s third edition was reviewed in part with an advanced copy of the retail version of the Warhammer Age of Sigmar Extremis Starter Set provided by Games Workshop. Vox Media has affiliate partnerships. These do not influence editorial content, though Vox Media may earn commissions for products purchased via affiliate links. You can find additional information about Polygon’s ethics policy here.