Home > Finance > Reopening blues: As India effects a calibrated exit from the lockdown, a range of issues linger

Reopening blues: As India effects a calibrated exit from the lockdown, a range of issues linger 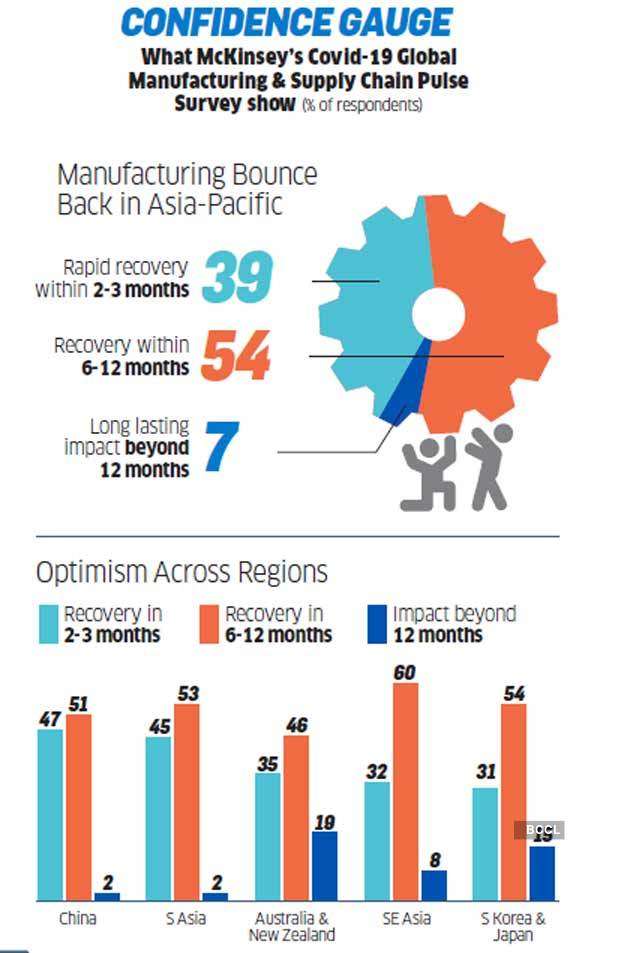 As India effects a calibrated exit from the lockdown, a range of issues faced by factories across the country linger

In challenging times, technology services companies are often afforded a great vantage of what is unfolding because many clients approach them for help with tiding over the crisis.

At IBM, work specific to this pandemic started early, when it started working with Mother Dairy to keep its essential services like milk and vegetables moving.

Mother Dairy had to stick to this time cycle, while almost every other business process for bringing the milk to the booth and selling it had changed due to the new norms around hygiene and social distancing.

As a provider of essential services, Mother Dairy had to figure out solutions quickly in March and April. Now in June, as more Indian companies are permitted to reopen their businesses, India Inc is grappling with change and disruption. While the office-side of things are largely under control with work from home taking deep roots, factories and shop floors, where the levers of production are cranked, normalcy is still a considerable distance away.

A May study by McKinsey identified five of the top challenges for businesses that are re-opening across Asia. They are material shortage, worker shortage, drop in demand, cash flow issues and planning issues.

When ET Magazine spoke to diverse industries across India, these themes resonated. Missing workers, broken supply chains and absence of demand are recurring themes. Derailed global trade has also affected Indian companies as have the multiple questions around China and its various roles as competitor, supplier and buyer.

Some companies, like Panasonic Life Solutions which localised its copper sourcing, have used this period to reconfigure business. Others, such as garments major Welspun India, have invested heavily in re-orienting its workflow. Lower demand has also given companies breathing space to get their house in order.

By the first week of June, Bajaj Auto hopes to be at 75% of its capacity. Since domestic demand is muted, that capacity isn’t that big an issue. However, there are many other glitches and it requires a lot of hard work to resolve those. Like most automakers, there are three to four levels of vendors to the company whose linkages need to be aligned. Some vendors are located in red zones and curfew timings create hurdles. Some of their components are coming from Gujarat, which is facing acute Covid-related challenges.

“We are trying to find alternative supply sources. All is being managed,” says Rakesh Sharma, executive director, Bajaj Auto. Multiple agencies from districts to states to the Centre are setting rules and guidelines. “Decisions are taken and then reversed. So we all are learning what the protocols are,” he says.

About 50% of Bajaj Auto’s production is exported. In normal times, the company ships 100 containers daily. Managing the exports seems to be the biggest problem today. “We are facing huge disruption in our shipping schedule,” Sharma says. Firstly, there are no drivers. And there are issues at the port, too.

At the plant, they have given a lot of virtual training on protocols, social distancing, PPE, etc. A lot is also dependent on the local authorities.

Sharma says the company continued to pay all its workers, including contract labour, during the lockdown and therefore it is not facing a labour shortage.


Towels and home-textiles maker Welspun India has followed the old-fashioned industrial practice of building colonies for its workers near its factories. CEO and Joint Managing Director Dipali Goenka says this has helped the company during the lockdown because workers at its plants in Vapi and Anjar did not feel the need to leave for their home states.

For an export-oriented company like Welspun, inspections and audits by clients are important. Under the circumstances, the company has found a workaround through virtual audits and virtual inspections by customers on camera.

However, many of Welspun’s suppliers, especially in southern India, which has seen an exodus of migrant labour, are facing challenges.

Large companies like Welspun appear to have coped well, spending on social distancing norms, and also shifting capacity to manufacture masks in the initial days of reopening. However, when one moves to the supplier ecosystem, comprising of small and medium enterprises, the problems come to fore. Apart from labour shortage, there are issues with finances and availability of loans.

Raja Shanmugam, president of the Tiruppur Exporters Association, says the industry is currently in a lean period as only pre-lockdown orders are being executed and the exodus isn’t hurting the textile exporters industry too much. He hopes workers will come back by September, when orders from developed markets come back.

Shanmugam, however, adds that the problem lies with working capital. “An additional 20% emergency credit support was announced for companies with outstanding debt of Rs 25 crore and revenue of Rs 100 crore. This Rs 25 crore limit on outstanding debt will exclude many MSME companies from getting access to the emergency credit. All MSMEs should get access to some additional credit.”

The exporters’ body has already written to the finance minister seeking a review of this limit.

For Panasonic Life Solutions, formerly Anchor Electricals, April was a wipeout in terms of sales. As the electricals, switchgear and lighting products maker hopes to recoup sales through the rest of the year, the company has yet another worry to deal with — a likely break in its supply chain of copper and plastic chips, two key raw materials for its products.

Vivek Sharma, MD of Panasonic Life Solutions, says the company mostly imports its copper and plastic chips’ requirements. It uses copper for wires and plastic chips for moulding products. While some of it is still in transit, it had to look for alternative sources for the raw material for the post-lockdown reopening.

“Copper prices may change every day on the London Metal Exchange, and as a result we do not stockpile copper for long periods. We usually hold 30-day inventories and import copper from Chile,” he says.

Plastic chips, especially the polycarbonate chips, are also imported. Korean and Chinese companies have the advantage of adequate indigenous production of these chips.

While the company uses Panasonic’s global sourcing strength to procure raw material, Sharma says this may be an opportunity to move the supply chain towards India. It has reached an understanding with Sterlite for sourcing its copper in the days ahead.

Over the last two years, after Sterlite’s smelter at Tuticorin was ordered closed, India has turned into a net copper importer. The other Indian manufacturers are Hindalco and Hindustan Copper. Prior to the closure, the total Indian copper smelting capacity would have been around 1 million tonne and China was one of the major importers of copper from India.

Electronic manufacturing units in India have re-opened but with gaps that have made it hard for them to operate at scale, creating opportunities for import of finished products from China, rather than helping local companies. “The industry has been able to achieve just 10-15% of the capacity,” says George Paul, CEO, Manufacturers Association of Information Technology, which represents more than 100 companies, including multinationals.

Firstly, with social distancing in force, assembly lines can’t function like in normal times. Besides, the curfew that allows factories to operate only from 7 am to 7 pm makes it difficult to run even two full shifts.

While it looks grim for local manufacturing, in China, factories are running full operations. “There’s huge pent-up demand for laptops, smartphones and electronics. Countries that can ship finished products to India will gain from the opportunity,” adds Paul.

The pent-up demand for smartphones alone is estimated to be worth more than $2 billion. Only 33% to 50% of the manpower is being allowed in factories which makes it difficult to run at full capacity. “We expect to get to 100% capacity by June-end,” says Muralikrishnan B, COO, Xiaomi India.

Can the government help Indian firms to reopen factories in a better way? Paul thinks so. “There is a lack of synchronisation between intent and reality. We recommend industrial activity be allowed to open fully, with due checks. Otherwise, SMEs will collapse and the government will have to support them much longer.

The situation is grim.”

Biotique Chairman Vinita Jain is someone who rarely complains. Yet, when she talks about the initial days of reopening the Biotique factory in Himachal Pradesh, Jain can’t seem to stop talking about the multiplicity of issues she faced.

Labour shortage issues are well known. However, that apart, there were supply chain issues as both the in-bound and the outbound chains were broken and lack of clarity prevailed at every level on what is allowed. And Jain is not alone. Others in the industry faced the same harrowing experience.

“There were major challenges. For one, labourers had to be quarantined. Then there were issues in supply chains and inter-state movement of goods,” recalls Jain.

The beauty and wellness industry was already hit by muted demand. What the post-lockdown reopening brought to it was a great sense of confusion.

Nitin Passi, joint MD, Lotus Herbals, says: “The Centre had issued clear guidelines allowing movement of goods transport. But empty trucks were not coming back, which was a challenge. Also differing interpretations of MoH (ministry of home) guidelines resulted in loss of confidence in restarting operations.”

Plus, the lack of labourers is still an issue. “Almost every week, the borders are getting sealed, making movement difficult,” adds Passi.

Just Herbs’ founder Arush Chopra talks about difficulties in procuring raw materials and delivering shipment. “Logistics chain is still partly broken,” he says, adding that the government can help by simplifying bureaucratic hurdles in testing times like these. “The mandatory paperwork for opening factories for small businesses needs to be simplified.”