Renal Function Decline With TKI Use in Chronic Myeloid Leukaemia 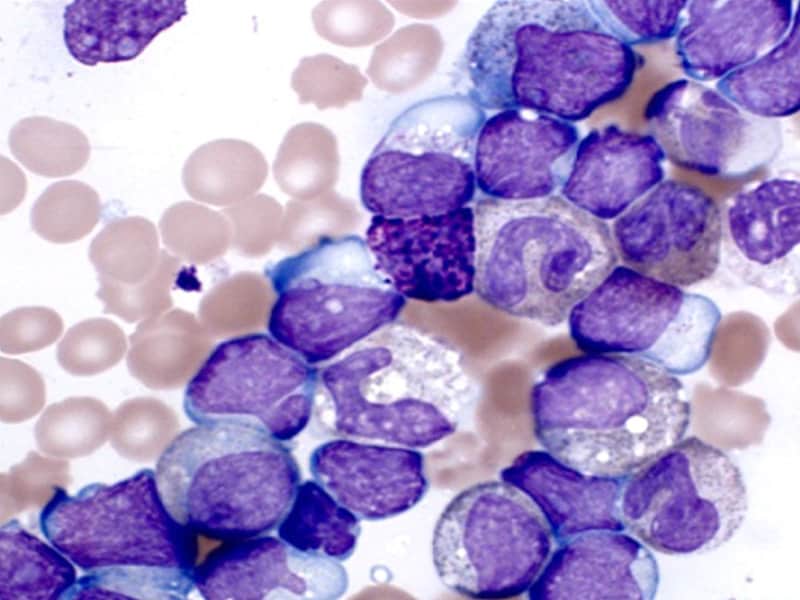 Renal function declines over time with tyrosine kinase inhibitor (TKI) treatment of chronic myeloid leukaemia (CML), although it is unclear if the relationship is causal, shows a 10-year study.

“The overall decline in renal function appears mild and gradual but we advise that renal function should be carefully monitored in patients on long-term TKI treatment,” reported Dr Richard Hinton, a haematologist at London North West University Healthcare NHS Trust.

“Decline in renal function may be another factor to favour consideration of a trial of treatment withdrawal,” he added. Adverse effects reported previously with TKI use, include fatigue, depression, sleep disturbances, and diarrhoea.

The study was presented as a poster at this year’s virtual British Society of Haematology (BSH) meeting.

Most patients with CML take a TKI at some point in their treatment. “TKIs have really brought a landmark change in how we manage CML, from a chemotherapy approach to a targeted treatment that has seen radical changes in patient outcomes,” explained Dr Hinton. “And many patients remain on TKIs for a long time, sometimes a decade, so CML has become a chronic disease in many ways.”

But the long-term side effects of TKIs are less well studied. “There’s knowledge of the short-term effects but little on long-term ones,” he added. “There’s some evidence of a gradual decline in renal function with use of these drugs.”

An alternative paradigm relates to the fact that increasing numbers of patients no longer need to be treated with TKIs if they achieve treatment-free remission upon stopping them. “If we identify longer-term side effects with TKIs then we might want to think about this – stop the TKIs and remain off treatment or at least try with a treatment interruption.”

Commenting on the work, Dr Ehab Atallah, from Medical College of Wisconsin, Milwaukee, US, said that renal toxicity has always been a concern for patients on TKIs. “Some, but not all, reports have suggested that long-term TKI use is associated with a decrease in renal function.”

He has recently published a paper showing that treatment-free remission, and improved patient-reported outcomes, occurs with discontinuation of TKIs. “TKI discontinuation may prevent some of these very long-term side effects, however this has not been shown clinically. Based on the improved quality of life, decreased cost, and possible decrease in long-term side effects, physicians should encourage patients with CML who are in a sustained deep molecular remission to attempt treatment-free remission.”

Data on estimated glomerular filtration rate (eGFR) was collected and analysed every 3 months for the first 3 years, and every 6 months thereafter up to 10 years. Other data drawn on included age, TKI choice, and length of treatment. Each patient was looked at individually in terms of change per year, and overall change (until the most recently available data).

A total of 56 patients were included. Median age was 48 years but ranged between 12 and 77 years. The majority received imatinib (43), eight received nilotinib, three received dasatinib, and two bosutinib, and median treatment length was 72 months.

“Changes were small, so the clinical significance is limited. But maybe if these patients were on the drugs for longer, then some patients might progress [decline in renal function] more rapidly,” remarked Dr Hinton.

“There is some suggestion that patients on imatinib were getting worse quicker than those on other TKIs but numbers are too small to draw concrete conclusions on that,” he added.

Dr Hinton says that the results support the monitoring of patients for renal function when on TKIs. “We cannot say for sure that TKIs cause a decline in renal function. But there’s also a suggestion that there’s a possible reason to stop TKIs and see what happens to a patient’s renal function.”

At the American Society of Clinical Oncology (ASCO) 2019 Annual Meeting, Medscape Medical News reported that TKIs had made such an impact in the treatment of CML that life expectancy for patients was now similar to that of the general population, provided patients continue on therapy.

However, it was also reported that evidence shows TKI therapy can be stopped for some CML patients. Long-term results from a follow-up of ENESTop, show treatment-free remission in approximately 50% of patients, 3.7 years after stopping treatment. The finding that TKIs might be associated with renal function decline might play into this decision.

Results showed that discontinuation of TKIs is safe and is associated with the successful achievement of treatment-free remission for some patients (a total of 60.8% of patients remained in treatment-free remission) and was associated with improvements in patient-reported outcomes. Dr Atallah points out that these findings should assist patients and physicians in their decision-making regarding discontinuation of TKIs.

In a commentary published to accompany the paper, Dr Theodore Braun, and Brian Drucker from Oregon Health & Science University, Portland, US, said it was the first study to look at patient-reported outcomes in CML patients in treatment-free remission who have discontinued TKI.

“The importance of proper monitoring after discontinuation cannot be over emphasised,” asserted Dr Atallah.