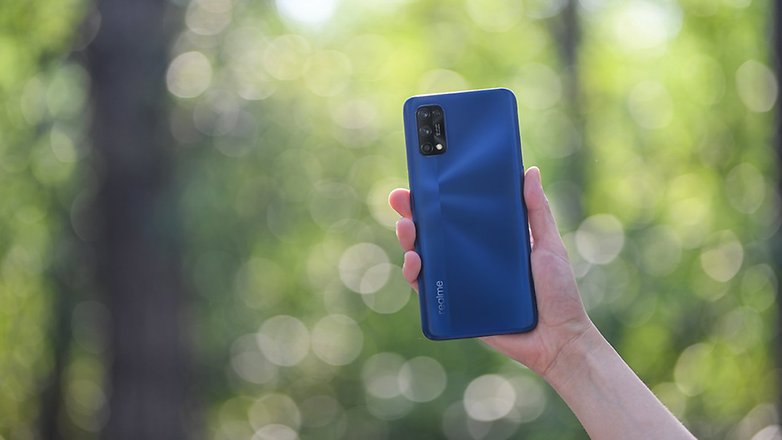 Realme’s relentless release schedule continues. The new 7 series will launch in India first, but both variants have passed the TÜV Rheinland Smartphone Reliability Verification, so expect a European release in the near future.

The Realme 7 Pro comes with 65W SuperDart Charge and is once again aimed at young fans of the brand. With charging speeds of up to 13 percent in just 3 minutes, the brand says a full charge can be achieved in 34 minutes. The Realme 7 Pro also supports 18W PD/QC charge.

The octa-core Snapdragon 720G processor powers the new 7 Pro smartphone. It is also equipped with Kryo 465 CPU with two high-performance Cortex-A76 cores at up to 2.3GHz and six high-efficiency Cortex-A55 cores at up to 1.8GHz, along with a new Adreno 618 GPU, which is the same as Snapdragon 730G. It comes in two memory formats: 6GB+128GB and 8GB+256GB.

For the display, the Realme 7 Pro features a 6.4-inch Super AMOLED Full Screen Pro with an in-display fingerprint sensor. It has a 180Hz sampling rate.

Camera-wise, Realme has gone with what it is calling an “ultra-clear quad camera set-“. It is comprised of its latest 64-megapixel main camera powered by a Sony IMX682 sensor. There’s also an 8-megapixel 119-degree ultra-wide-angle sensor, a macro lens, and a B&W portrait lens. On the front, you get Realme’s highest resolution 32-megapixel selfie camera that can capture bright selfies in the dark thanks to its Super Nightscape mode.

The Realme 7 Pro is available in two color options Mirror White and Mirror Blue. The 6GB+128GB version is priced at INR 19,999, whilst the 8GB+256GB costs INR 21,999. We’ll let you know as soon as we have European prices for these.

The more budget-friendly Realme 7 features the world’s first MTK Helio G95 Gaming Processor. This processor is made using a 12nm process and is equipped with two high-performance Cortex-A76 cores at up to 2.05GHz and six high-efficiency Cortex-A55 cores at up to 2GHz, along with 900MHz Mali-G76GPU.

Realme says that this updated CPU, GPU, super-fast RAM, and powerful AI combination delivers a smooth experience to mobile game lovers. It comes with either 6GB or 8GB of RAM. For internal storage, the 6GB comes with just 64GB whilst the 8GB version has 128GB.

Equipped with a Sony 64-megapixel Quad camera, the Realme 7 should offer a good camera experience for the money. That main sensor is a Sony IMX682 sensor, with the others being an 8-megapixel 119-degree ultra-wide-angle lens, a macro lens, and a B&W Portrait lens.

We’ll be reviewing both the Realme’s 7 series phones on NextPit shortly, so stay tuned for that.