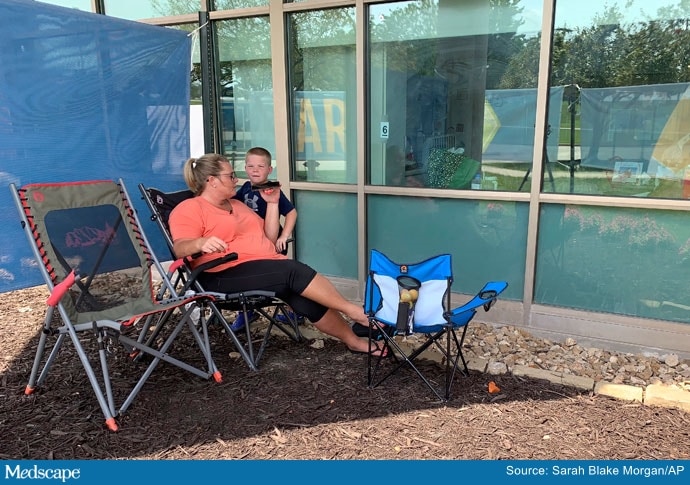 Billie Barker with her son Brody, 6, uses her cellphone to speak with her husband, Daryl, who is on the other side of the window inside his room at Lake Regional Hospital in Osage Beach, MO.

OSAGE BEACH, MO. (AP) — Daryl Barker was passionately against a COVID-19 vaccination, and so were his relatives. Then 10 of them got sick and Barker, at just 31, ended up in a Missouri intensive care unit fighting for his life.

It’s a scenario playing out time and again at Lake Regional Hospital in Osage Beach, where 22 people died from the virus in the first 23 days of July. Many other hospitals across Missouri are fighting the same battle, the result of the fast-spreading delta variant invading a state with one of the nation’s lowest vaccination rates, especially in rural areas.

The Associated Press was given access inside Lake Regional, where just two months ago, no one was hospitalized with the virus. Doctors, nurses and staff at the hospital in the heart of the Lake of the Ozarks region are now dealing with an onslaught of COVID-19 patients — some of them struggling to stay alive.

“We’ve had a big-time delta virus surge here. A lot of admissions, a lot of people who are very sick and are dying,” said Dr. Harbaksh Sangha, Lake Regional’s chief medical officer.

“So as a human being it’s very frustrating, but as a physician we just take care of whatever we get.”

Just 47.5% of Missourians have initiated vaccination, nearly 10 percentage points less than the nation as a whole. Around Osage Beach, a town of about 5,000 people that straddles two counties, state data shows only 38.6% of Camden County residents and 26.7% in Miller County have started the process.

Barker, of Branson, about 120 miles (190 kilometers) southwest of Osage Beach, understands the hesitancy.

“I was strongly against getting the vaccine,” Barker said through labored breathing. “Just because we’re a strong conservative family.”

In the U.S., many people who identify as politically and socially conservative have been more reluctant to be vaccinated — so much so that in Missouri, faith leaders have joined the effort to encourage shots. Meanwhile, the summer outbreak is so alarming that Democratic-led St. Louis city and county and Kansas City have reinstated mask mandates.

The virus has recently run through Barker’s extended family. Not only did he and his wife, Billie, get it, but so did eight other relatives.

Barker got so sick that his wife took him to the emergency room in Branson. He was sent home with oxygen, but got worse.

With the Branson hospital maxed out with COVID-19 patients, doctors contacted a dozen hospitals in all corners of the state. All were at capacity. Lake Regional was nearly full, too, but Dr. Joe Sohal, a pulmonologist and critical care specialist, found a bed for Barker.

He arrived critically ill. Placed on a ventilator, Barker was given a 20% chance of surviving.

“The doctor told me he was going to let my wife and kid in so I could say my goodbyes because he didn’t think I was going to pull through,” Barker said. In those conversations, he told his wife and 6-year-old son, Brody, that he loved them “and I wasn’t going to give up.”

Slowly, Barker started to recover. Sohal is optimistic but said Barker, who has been hospitalized for three weeks, isn’t out of the woods.

“This is the time when he’s going to get a lot better or a lot worse,” Sohal said.

The Lake of the Ozarks region draws nearly 5.5 million annual visitors and made national news early in the pandemic, when large crowds were spotted ignoring social distancing while partying at bars and swimming pools.

If tourists are getting sick, they’re taking it home with them. Sohal said most of the COVID-19 patients at Lake Regional are locals, or people like Barker transferred from other hospitals.

Statewide, hospitalizations for COVID-19 have more than doubled since the start of June, and the number of ICU patients has more than tripled. Since June 7, Lake Regional has admitted 125 patients with the virus. As of Tuesday, it had 21 COVID-19 patients, including eight in intensive care and four on ventilators. Sohal himself signed about a half dozen death certificates over the past week.

Sohal said many patients now are younger — in their 20s, 30s or 40s — and sicker, often with gastrointestinal distress in addition to breathing problems.

Hospital staff members are exhausted. Among those feeling the strain is ICU nurse Chris Murphy, who spends much of his day running from one room to the next.

“It’s devastating people and families,” Murphy, a former combat medic, said of the virus. “And you should take precautions.”

Sohal said nearly everyone hospitalized is unvaccinated. Patients have said they worried about vaccine side effects, or felt the vaccines were rushed out took quickly.

Daryl and Billie Barker both plan to get vaccinated once he recovers.

Daryl said his wife and son are why he’s fighting so hard.

On a sweltering day, they sat outside the ICU in lawn chairs, looking at Daryl through glass. Every now and then, Brody walked up to the window and waved to his dad, who smiled and waved back. Billie used a dry erase marker to scrawl “I love you” backwards on the glass so her husband could read it.

“I don’t ever want to have to do this again,” she said, “and if that means getting a vaccination to prevent something like this, that’s what I’ll do.”