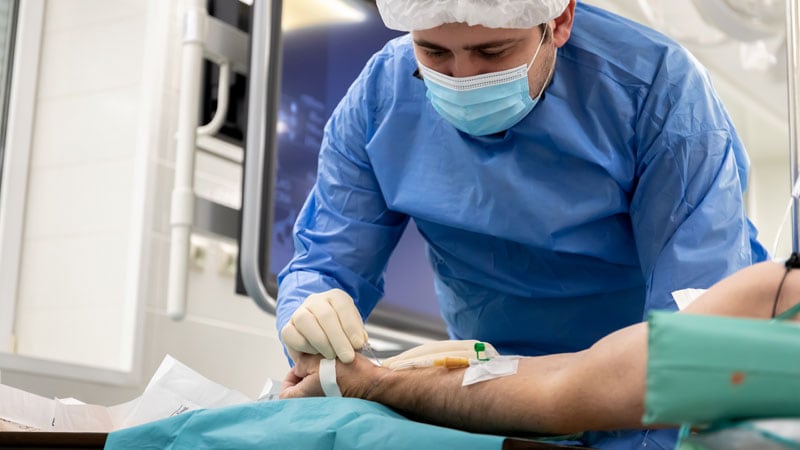 There’s a price to pay for a failed radial artery attempt in invasively managed patients with acute coronary syndrome (ACS), but it may not be as high as previously thought, a new MATRIX substudy suggests.

The adjusted 30-day risks were similar between patients with radial crossover and those undergoing successful radial access:

The individual components of these endpoints were also similar between groups. Yet the need to cross over wiped out the primary advantage of the radial artery — significantly increasing the risk for access site-related Bleeding Academic Research Consortium type 3 or 5 bleeding (aRR, 9.65; 95% CI, 2.49 – 37.41). Other bleeding events, including overall BARC 2, 3, or 5 bleeding (aRR, 1.80; 95% CI, 1.02 – 3.16), were also higher.

When the researchers looked at how radial crossover stacked up against successful femoral interventions, the adjusted 30-day risks were similar for the co-primary outcomes and their individual components:

Access site-related BARC 3 or 5 bleeding was higher in the radial crossover group (aRR, 1.87; 95% CI, 1.08 – 3.26) but overall bleeding risks were similar in the study, published in the February 22 issue of JACC Cardiovascular Interventions.

The radial approach is recommended as the default strategy in US and European guidelines and dominates coronary interventions today. Crossover rates, however, are higher with radial access and most studies suggest worse clinical outcomes with radial-to-femoral crossover.

“The big surprise, which is really important clinically, is that we didn’t confirm that crossing over from radial to femoral detrimentally impacts on global or cardiovascular outcomes,” senior author Marco Valgimigli, MD, PhD, University of Bern, Switzerland, told theheart.org | Medscape Cardiology. “When you gain access from the femoral instead of radial, you lose the bleeding benefit associated to the radial artery but, apart from this, the outcome is comparable.”

In 2018, the 8404-patient MATRIX study reported lower risks for MACE and NACE through 1 year in ACS patients assigned radial vs femoral access.

Patients in whom crossover is needed are different from those in whom radial access is successful, he noted, raising the question of whether the worse outcomes attributed to radial crossover may simply reflect sicker patients.

Patients with radial crossover were about 5 years older than those undergoing successful radial access, more likely to be women and to have histories of myocardial infarction (MI), bypass surgery, and renal failure, and presented more often with ST-segment elevation MI (STEMI).

“We had enough events and statistical power to run a full multivariable model adjusting for all potential confounders and our analysis suggests that the worse outcomes observed in previous studies come from the sicker patient profiles, not crossover per se, which is the major finding of the manuscript,” Valgimigli said via email.

Two risk calculators have been proposed to predict the risk of crossover from radial to femoral access but neither has been externally validated, he said.

“Having such a risk score available would help in determining upfront in which patient the femoral access may directly be attempted to minimize the risk of crossovers,” Valgimigli said. “On the other hand, an expert radialist may still try to perform a transradial procedure because now he/she knows that the need of crossover is not associated to any incremental risk but the bleeding benefit of radial.”

Although failure to complete a procedure via the femoral artery is a relatively rare event (at about 2% in large ACS cohorts), the prognosis was darker for this subset of patients. The crude incidence of composite ischemic and/or bleeding events at 30 days exceeded 20% — the highest among all study groups, the authors noted.

Patients with femoral crossover had a higher body mass index and more frequent histories of diabetes and peripheral artery disease, and were less likely to present with STEMI than those with successful femoral access.

“Identifying patient characteristics favoring femoral over radial access is a developing knowledge base that should be cultivated,” John W. Hirshfeld Jr, MD, University of Pennsylvania, Philadelphia, and colleagues write in an accompanying editorial.

The editorialists also caution about the need for femoral operators to maintain their proficiency — something that may become a challenge if more than 90% of procedures are done by radial access. This skew toward radial also creates the potential for current trainees to get limited exposure to femoral techniques and lack the opportunity to develop proficiency.

“We are already seeing this in current training program in which trainees are uncomfortable performing femoral access procedures,” Hirshfeld said.

While the results are reassuring for radial operators, Valgimigli concurred on this point. “The use of left ventricular assist devices and structural intervention in terms of transcatheter aortic valve implantation is today the biggest stimulus for all of us to maintain the skills to properly access the femoral artery,” he said. “Yet, as shown in our study, 100% radial does not simply exist, and each operator, even if particularly skilled transradially, needs to puncture the femoral artery.”

The study is the largest to evaluate patients undergoing radial or femoral access with and without crossover, but wasn’t powered to explore differences in outcomes across these subgroups, the authors wrote. As such, it might be subject to type II error, although results remained largely consistent after excluding patients with randomized access not attempted.

Another limitation is that participating centers in the MATRIX study were experienced with both approaches, so results may not apply in centers with low radial or femoral expertise.

The MATRIX study was sponsored by the Società Italiana di Cardiologia Invasiva, which received grant support from The Medicines Company and Terumo. This substudy did not receive any direct or indirect funding. Valgimigli  has received grants and personal fees from Abbott, Terumo, and AstraZeneca; personal fees from Chiesi, Bayer, Daiichi-Sankyo, Amgen, Alvimedica, Biosensors, and Idorsia; and grants from Medicure outside this work. Several coauthors have financial disclosures; the full list can be found on the original report. The editorialists have disclosed no relevant financial relationships.