Home > Technology > Proud Boys: We will wear all black like antifa at January 6 DC rally

Proud Boys: We will wear all black like antifa at January 6 DC rally 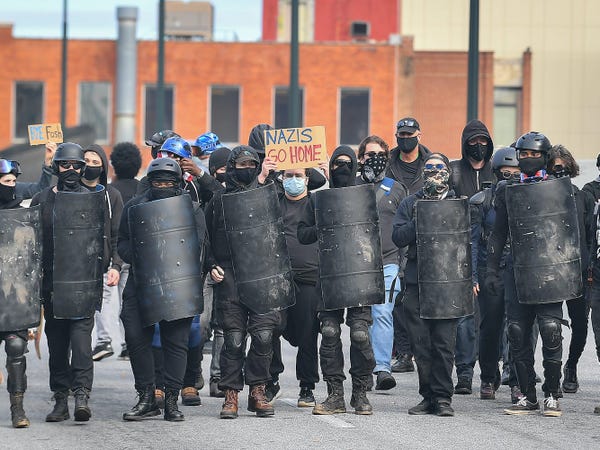 Members of the far-right group, the Proud Boys, will head to Washington, DC to rally for President Donald Trump on January 6 — the day on which Congress is scheduled to meet to finalize the 2020 presidential election results.

Leaders from the group have shared with their followers that they intend to attend the rally “incognito” and wearing “ALL black.”

The Proud Boys’ chairman, Enrique Tarrio, revealed on Parler that “the Proud Boys will turn out in record numbers on Jan 6th but, this time, with a twist.”

The twist, Tarrio said, is that they will forgo their traditional uniform for something inconspicuous.

He wrote: “We will not be wearing our traditional Black and Yellow.”

Instead, the chairman explained: “We might dress in all BLACK for the occasion.”

The Proud Boys intend to take further steps to blend in with other protesters.

Tarrio wrote: “We will be incognito and we will spread across downtown DC in smaller teams.”

Joe Biggs, an organizer for the group, confirmed the alleged plans on his Parler account.

In a video, he said: “We will not be attending DC in colors. We will be blending in as one of you. You won’t see us. You’ll even think we are you. “

The Proud Boys gained mainstream attention after Trump name-called them at the first presidential debate.

They made headlines again after Tarrio claimed responsibility for setting a Black Lives Matter banner on fire during a pro-Trump rally on December 12.

Their plans to gather in support of Trump on January 6 have worried some politicians.

The DC’s Attorney General Karl Racine told CBS News: “My level of anxiety is high. My preparation is even more intense than that.”

Racine said that he fears that the Proud Boys will “pick fights, create damage, damage property, and then act in a very threatening way.”

Trump has been accused of inciting right-wing groups to participate in violent protests on January 6.

A former top aide to Vice President Mike Pence, Olivia Troye, has said that she fears that there could be violence at this rally because “the president himself is encouraging it.”

Last month, President Donald Trump promised his supporters that there would be a “wild” rally in Washington, DC.

On Friday, the president reminded his followers that there would be a “BIG Protest Rally” taking place in the capital from 11 a.m.

Bridgewater's Ray Dalio: US on 'brink' of civi...

EY says it will be 'carbon negative' by end of...