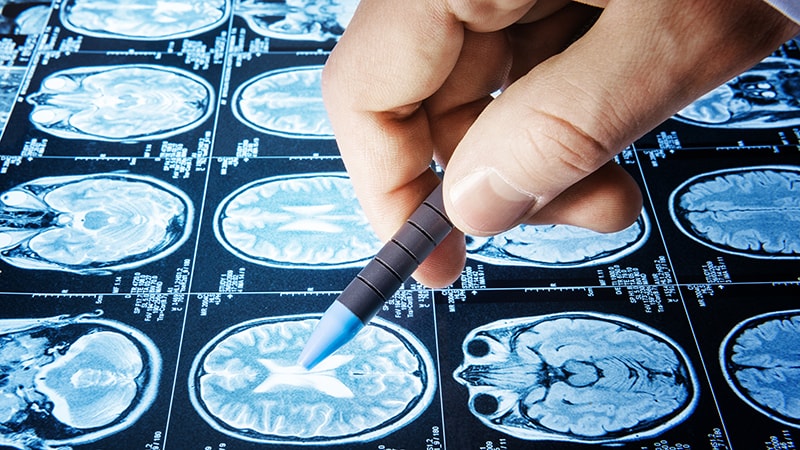 Catheter ablation has been around a lot longer for ventricular arrhythmia than for atrial fibrillation, but far less is settled about what antithrombotic therapy should follow ventricular ablations as there have been no big, randomized trials for guidance.

But the evidence base grew stronger this week, and it favors postprocedure treatment with a direct oral anticoagulant (DOAC) over antiplatelet therapy with aspirin for patients undergoing radiofrequency (RF) ablation to treat left ventricular (LV) arrhythmias.

Those of its 246 patients who received aspirin were also far more likely to show asymptomatic lesions on cerebral MRI scans performed both 24 hours and 30 days after the procedure.

The findings show the importance of DOAC therapy after ventricular ablation procedures, a setting for which there are no evidence-based guidelines, “to mitigate the risk of systemic thromboembolic events,” said Dhanunjaya Lakkireddy, MD, Kansas City Heart Rhythm Institute, Overland Park, Kansas. He spoke at a media presentation on the trial, called STROKE-VT, during the Heart Rhythm Society 2021 Scientific Sessions, held virtually and on-site in Boston.

The risk for stroke and TIA went up in association with several procedural issues, including some that operators might be able to change in order to reach for better outcomes, Lakkireddy observed.

“Prolonged radiofrequency ablation times, especially in those with low left ventricle ejection fractions, are definitely higher risk,” as are procedures that involved the retrograde transaortic approach for advancing the ablation catheter, rather than a trans-septal approach.

The retrograde transaortic approach should be avoided in such procedures, “whenever it can be avoided,” said Lakkireddy, who formally presented STROKE-VT at the HRS sessions and is lead author on its report published about the same time in JACC: Clinical Electrophysiology.

The trial has limitations, but “it’s a very important study, and I think that this could become our standard of care for managing anticoagulation after VT and PVC left-sided ablations,” Mina K. Chung, MD, Cleveland Clinic, said as an invited discussant after Lakkireddy’s presentation.

How patients are treated with antithrombotics after ventricular ablations can vary widely, sometimes based on the operator’s “subjective feeling of how extensive the ablation is,” Christine M. Albert, MD, MPH, Cedars-Sinai Medical Center, Los Angeles, not involved in the study, said during the STROKE-VT media briefing.

That’s consistent with the guidelines, which propose oral anticoagulation therapy after more extensive ventricular ablations and antiplatelets when the ablation is more limited — based more on consensus than firm evidence — as described by Jeffrey R. Winterfield, MD, Medical University of South Carolina, Charleston, and Usha Tedrow, MD, MSc, Brigham and Women’s Hospital, Boston, in an accompanying editorial.

“This is really the first randomized trial data, that I know of, that we have on this. So I do think it will be guideline-influencing,” Albert said.

“This should change practice,” agreed Jonathan P. Piccini, MD, MHS, Duke University, Durham, North Carolina, also not part of STROKE-VT. “A lot of evidence in the trial is consistent and provides a compelling story, not to mention that, in my opinion, the study probably underestimates the value of DOACs,” he told theheart.org | Medscape Cardiology.

Of the 246 patients assigned to either aspirin or a DOAC, usually a factor Xa inhibitor, 75% had undergone VT ablation and the remainder ablation for PVCs. Their mean age was 60 years and only 18% were women. None had experienced a cerebrovascular event in the previous 3 months.

“The study tells us it’s safe and indeed preferable to anticoagulate after an ablation procedure. But the more important finding, perhaps, wasn’t the one related to the core hypothesis. And that was the effect of retrograde access,” Paul A. Friedman, MD, Mayo Clinic, Rochester, Minnesota, said as an invited discussant after Lakkireddy’s formal presentation of the trial.

Whether a ventricular ablation is performed using the retrograde transaortic or trans-septal approach often depends on the location of the ablation targets in the left ventricle. But in some cases it’s a matter of operator preference, Piccini observed.

“There are some situations where, really, it is better to do retrograde aortic, and there are some cases that are better to do transseptal. But now there’s going to be a higher burden of proof,” he said. Given the findings of STROKE-VT, operators may need to consider that a ventricular ablation procedure that can be done by the trans-septal route perhaps ought to be consistently done that way.