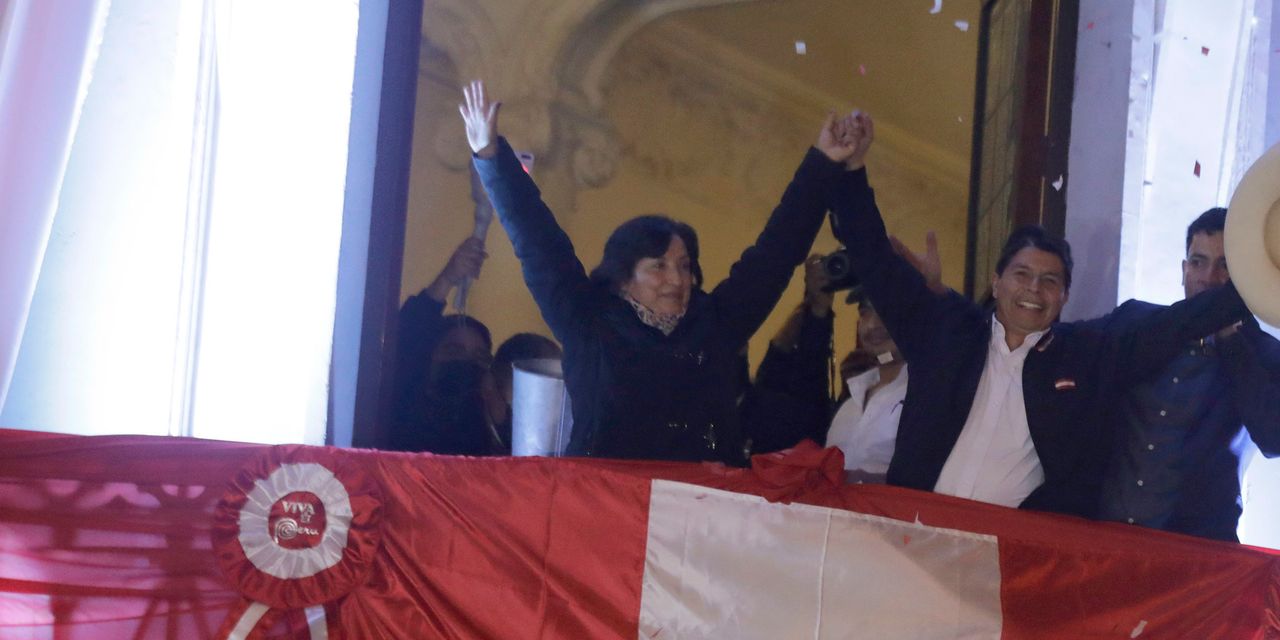 Pedro Castillo, a far-left union activist whose rise has jarred Peru’s political establishment, was declared president-elect Monday night amid deepening social unrest in a country battered by the coronavirus pandemic.

He will take office on July 28 after winning 50.1% of the votes in the June 6 election versus 49.9% for Ms. Fujimori, who has refused to accept the results.

The election of the 51-year-old head of a Marxist party could result in an overhaul of Peru’s market economy, which has relied on global trade to power one of Latin America’s fastest-growing economies during the past two decades.

The rise of Mr. Castillo, a former schoolteacher from the rural Andes, underscores how the pandemic can fuel a backlash against the ruling class in hard-hit countries. His election occurred amid a backdrop of public anger over the state’s failure to deliver decent public services despite years of strong economic activity and a slew of corruption scandals that tarnished several powerful politicians.

The pandemic in Peru has killed more people on a per capita basis than anywhere else in the world and exposed a crumbling public health system. It also drove about 10% of the population back into poverty, reversing 15 years of social gains.

Mr. Castillo’s inauguration on the 200th anniversary of Peru’s independence, though, may generate more strife since he faces an opposition that sees his election as illegitimate and fears he is a threat to the market economy.

Since 1999, leftist Latin American leaders rose to power from Venezuela to Brazil to Bolivia and Mexico after years of building support through political movements that attracted voters disenchanted with traditional politicians.

Mr. Castillo, in contrast, appeared to come out of nowhere to win the presidency. A political novice with no governing experience, he hails from a rural Andean left on the fringe of Peru’s national politics. Pollsters say he lacks widespread support, highlighted by how close he came to losing to Ms. Fujimori, one of Peru’s most unpopular politicians and daughter of former autocratic President

Just 20% of Peruvians back Mr. Castillo’s top campaign promise of redrafting the constitution, according to a Datum poll last month.

“Castillo is quite isolated,” said Cynthia McClintock, a Peru expert at George Washington University. “He is going to have a really rough ride.”

His five-year term is likely to be a struggle, Ms. McClintock said, pointing to a Congress that can easily impeach presidents. His interventionist policies will face strong opposition from the business community. Hundreds of retired military officials have urged the armed forces to intervene and keep him from ruling.

On Monday, Ms. Fujimori said she would recognize the election agency’s decision, but reiterated that the vote was fraudulent, without offering proof. The U.S. called the election a “model of democracy” in Latin America. The Organization of American States and the European Union said the vote was clean.

Guillermo Artiaga, a 52-year-old potato farmer, voted for Mr. Castillo and said he hopes he will create jobs and improve healthcare and education in rural Peru.

“People are scared of change,” said Mr. Artiaga. “But it shouldn’t be that way, sometimes change can be good.”

a Peruvian mining executive, said he thinks Mr. Castillo will have no choice but to moderate and meet with business leaders because of his fragile political standing.

Notes on the News

Today’s headlines, news in context, and good reads you may have missed, with Tyler Blint-Welsh.

Mr. Castillo’s insistence on a new constitution worries many Peruvians because it is a tactic regularly used by leftist strongmen in Latin America to tighten their hold on power.

“Private companies don’t care about anything except looting our natural resources,” said Katy Ugarte, a politician from Mr. Castillo’s Free Peru Party who was elected to congress. She wants the new president to nationalize gas deposits and dreams of a new constitution.

For many Peruvians, though, uncertainty about the incoming president has led them to put their savings into dollars and move their money. Meanwhile, the central bank’s foreign reserves fell by $9 billion between April and the end of June, a more than 10% drop.

At street protests, Mr. Castillo’s critics say he is a communist with ties to a former Maoist insurgency that terrorized Peru in the 1980s and early 1990s. Mr. Castillo denies those allegations.

“The fight is just beginning for us,” said Armando Rojas, a 47-year-old lawyer in Lima. “We won’t allow our country to fall into an abyss, into misery.”

Juan Carlos Santiago, a 65-year-old small-business owner in Lima, said he is convinced Mr. Castillo will unravel Peru’s weak democratic institutions and try to remain in power indefinitely. Mr. Santiago said he would support a coup.

“I’d support any measure that is anticommunist,” Mr. Santiago said.

Michael Shifter, president of the Inter-American Dialogue policy group in Washington D.C., said Peru is facing deepening political instability. He blamed Mr. Castillo’s opponents for “classical Cold War thinking, the view that in order to save democracy we need to subvert democracy to stop the communists.”

“The biggest risk is not the installation of a communist dictatorship but just complete disorder and chaos,” Mr. Shifter said. “The ground is fertile for possible violence.”

More coverage of the election, selected by the editors.